This is where millionaires are made.

Share All sharing options for: The Big Ten Betting Extravaganza: Week 6 - Double down

So last week, fuckPurdue was a 16.5 point favorite and leading 42-14 at halftime. Things were looking good. Then what happened was, Purdue went into the locker room and took turns pulling long, chaulky hits off of the 6 foot glass bong that Dwayne Beckford left in his locker. Then they spent the 3rd quarter staring at the jumbotron and pondering what would happen if, like, they lived inside the jumbotron. Then they ate pizza while Marshall blocked punts and threw touchdown passes and covered the spread. I didn't need another reason to hate Purdue, because I've always hated Purdue...but fuck those guys with the wrong end of a croquet mallet.

Probably better that I lost anyway. I would be like 6'11" with those T-Rex high heels on. But once again, I was playing for something that didn't make much sense. If I'm going to win these bets I need to focus and the best way to do that is to set my sights on something that I genuinely need. That's why this week I'm playing for a chrome ball scratcher. 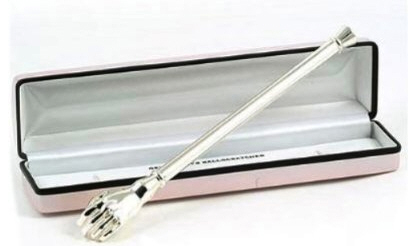 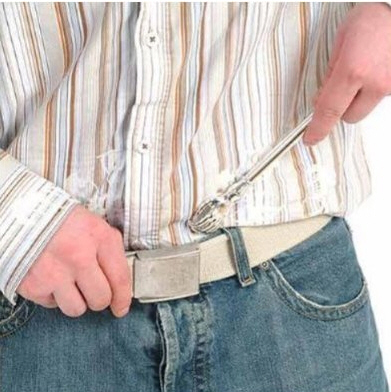 For the man who has everything. (Except Gold Bond.)

The only difference is, I won't be wearing such an assholish shirt. Let's see that grid. Favorites are in bold. NEW FEATURE: The arrows indicate which way the lines have moved since opening.

There's a couple of big line movements from Monday. Michigan State opened as a 16-point favorite over Indiana, but the money came in heavy on Indiana and now they're only giving 14. This makes perfect sense, because why wouldn't you bet money on Indiana football? This is probably indicative of bettors doubting that MSU can even get to 14 points. The other big mover is Wisconsin opening at 11.5 and moving all the way up to 14. There's a significant difference between spotting a team two touchdowns as opposed to 11.5, so it will be interesting to see if there's any more movement before Saturday. It would probably have to get to about 20 before I'd even remotely consider the 44-legged shitlog that is Illinois.

The over/unders have been adjusted as well, with Nebraska-Ohio St moving from 53.5 all the way up to 57. Not sure why, I'll take the under there. Those two quarterbacks might have 10 completions between the two of them and I think the clock expires before either team hits 30. The Michigan-Purdue O/U moved up two from 56 and Michigan St-Indiana went the other way from 49.5 down to 47.5.

Last week Purdue failed to cover for the first time this year. Iowa and Wisconsin, on the other hand, got their first wins against the spread. Penn State hadn't hit the over all year but then they managed to squeeze it out by a half point with little help from Illinois. As of this week, Indiana still has yet to go under and Michigan State has yet to hit the over so one of those trends will break on Saturday. Shit, and I suppose I have to mention that Northwestern is still a perfect 5-0 against the spread.

Otherwise you'll take Penn State -2 because you want Northwestern to lose by 70 because fuck them with a parking cone. And I don't mean a different parking cone for each player and coach. They all have to use the same one. Fitzgerald goes last.

In some ways, gambling is like playing quarterback. You have to be able to shake off the interceptions and go out the next play and rifle the ball in between two defenders for a completion. Or throw another interception. Fuck, I don't know. I guess what I'm trying to say is: I'm taking Purdue again. This time as a home dog to Michigan. The moneyline is only +125, so I'll take the 3 points.

Any gambler knows that when you hit a cold streak, the best thing to do is double down. And probably parlay something. So better give me the over on the Purdue game as well.

Also, I'll take under on Michigan State-Indiana as a safety net.

Can't wait til Sunday. Got some serious ball-scratching to take care of.