Share All sharing options for: Ferentz Loads Iowa Program With Ferentzes For Family Feud, Not Football

(Big thanks to Horace E. Cow for his amazing help with this post. -- ross)

Good morning, folks. Real excited about this off week. Comes at a good time for us. We need to get a few guys healthy. Need to get the passing game on the same page, too. Any questions?

Coach, is it true?

Well... is it true that there were certain non-football reasons you hired Brian Ferentz as your new offensive line coach?

Well, you know, it's not every day that you get to coach with your son, so that was certainly exciting, real exciting opportunity there. And Mary, well, she kind of gave her two cents about his candidacy, too... /chuckles

Are you sure there weren't some... other non-football reasons you were so keen to get Brian back in the fold?

I don't think I know what you're talking about.

Yes. It's true. I needed Brian back this year because I realized I finally had the opportunity to field the perfect Family Feud team.

For too long, I had neglected the most important aspect of a Feud team: family.

Do you remember after the 2002 season, when I took a group of coaches on the Feud? 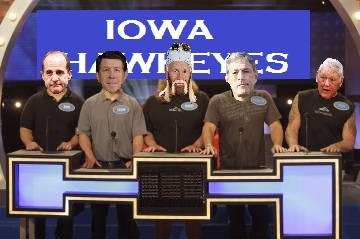 Uh, no... Refresh my memory: who was on that team again?

Oh, me, Norm, Ken, Phil, and Reese. Although Reese was in his nWo mode at the time. So he was a little... off.

It was a disaster. Total meltdown. We were the fat cats of Family Feud teams. Embarrassing. Just pathetic. We didn't respect the Feud. We were all high and mighty, thought we were real hot stuff. We thought we could just show up and win the Feud, no practice, no teamwork.

Huh. No, I don't remember hearing about that at all.

Anyway. I tried to put the Feud behind me. Truly, I did. But I can't do it, just can't do it. There's a void in my soul and it can only be filled by victory in the Family Feud.

But now I think I've figured it out. With Brian back in the fold and Steven here, alongside James... now I've got it. Now I know I can win. 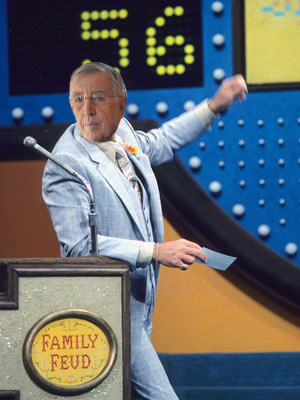 YOU ARE LOOKING LIVE... AT STUDIO 33 IN CBS TELEVISION CITY!

Welcome, ladies and gentlemen, to another pulse-pounding edition of... The Family Feud! I'm your host, Brent Musberger!

Folks, we have a very special edition of the Feud for you today. These two teams prove that football is not just a game -- it's a family affair! 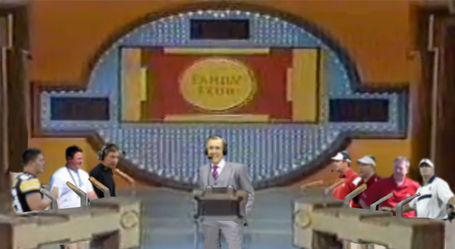 Up first is a team of brothers hailing from Youngstown, Ohio... the sensational Stoops siblings!

So, Bob, tell me a little about yourself.

Sure. I'm Bob Stoops, the oldest of the bunch. I'm the head football coach at the University of Oklahoma, where I've won 80% of my games and played in four national championship games.

/whistles Wow! And how many of those did you win?

Ah. Well, getting there is an achievement in its own right, isn't it, Bob?

So who'd you bring with you today?

Uh, you definitely can't say that on the Feud.

... and this is my brother, Mark Stoops.

It's great to meet you, Mr. Musberger.

Oh, that must be exciting!

Yeah, it's pretty cool. Got a pretty good defense this year. /shrugs

... and this is my other brother, Ron Stoops.

Uh, he doesn't speak. Or blink. Or move.

Yeah. But Mom made me bring him along.

Tell us a little about yourself, Kirk.

Sure, Brent. I'm the head coach of the University of Iowa football team and I feel darn lucky to be here with all three of my sons.

That is impressive. Why don't you introduce them?

This is my oldest boy, Brian.

What do you do, Brian?

I used to coach tight ends for the New England Patriots. Now I coach the Iowa offensive line.

So you're the head big ugly, huh?

Are you calling me ugly?

Haha! And who's this strapping young lad?

You look way too young to be a coach, son.

... and this is my youngest boy, Steven.

Lemme guess, another offensive lineman? Frankly, you look a little on the scrawny side for that. 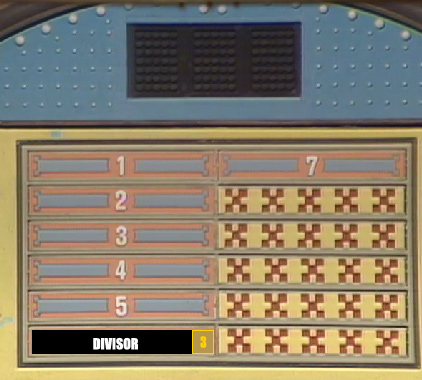 The Stoops family has control!

YOU'RE DAMN RIGHT WE DO

Okay, Mike, name something else overheard in math class.

Okay, Mark, your team needs you to get some positive momentum going again... name something else overheard in math class.

Hey, I spend all day thinking about defensive calls. What do you want?

Okay, Ron, last chance for your team... name something else overheard in math class.

Okay, Ferentz family, this is your chance to steal the category. Name something else overheard in math class.

Janey Smith is a whore!

Shut up, you idiot.

Time's running out, Ferentz family -- is that your final answer? 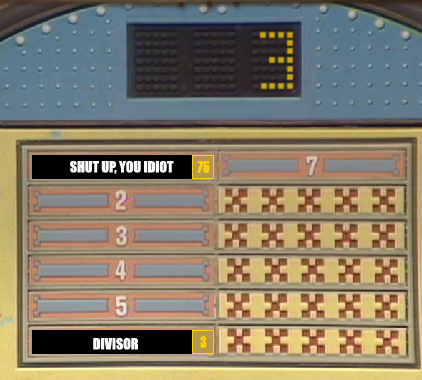 Ho ho! Not only was that a correct answer -- it was the most common response from our panel of experts!

...okay, it's time for the next category. Kirk, Bob? Step on up again.

We asked a panel of 100 college football coaches: "Name something you can do with a timeout."

Wow, you're quick on the draw there, Kirk. Whatcha got?

Show me... "use them inopportunely!" 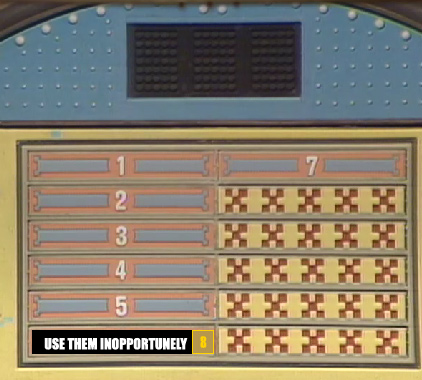 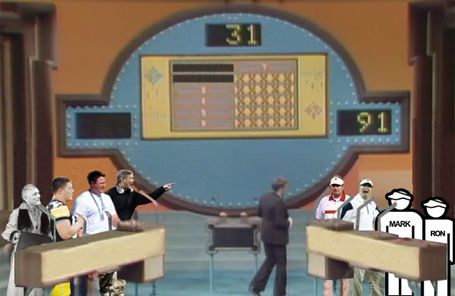 That's all we've got time for today, ladies and gentle--

I got you this time, Stoops! I got you good!

THOSE FERENTZES CHEATED! THEY GOT TO REPLACE SLAPDICK STEVIE FERENTZ WITH SOME TIME-TRAVELLING GRAND-DAD FERENTZ! THAT AIN'T RIGHT!

Well, technically speaking, there's nothing in the Feud rules prohibiting the use of time travelers. And he is a Ferentz.

Ha! Suck on that, Marky Mark.

WHATEVER, JUNIOR, THIS IS LAME. C'MON, MARK, LET'S GO DO WHIP-ITS AND DO SOME DONUTS IN THE PARKING LOT.

You nodded off, Coach.

Yeah, you were mumbling something about the Stoops brothers and timeouts and math class.

Oh... I had a dream, fellas. The most wonderful dream.

Now if you'll excuse me, I need to go call a Family Feud producer...

BONUS! This 'shop from hawk6894 ended up not fitting the direction of the post, but it was too good not to share. 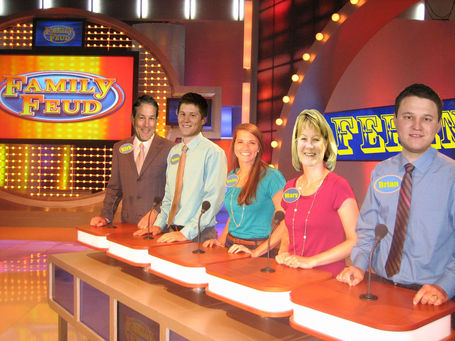