Let the gnashing of teeth and rending of garments commence! Er, continue.

Same as it never was. Stop me if you've heard this one before: the Iowa defense had trouble stopping the Northwestern offense on Saturday. Except this wasn't the jNW offense that's given Iowa fits in years past. Northwestern threw all of ten passes against Iowa on Saturday, completing seven for 84 yards, 1 TD, and 1 INT. This was not the Northwestern offense of years past, the offense of dink-and-dunk passing and absurd patience and precision. In fact, Northwestern ran just 59 plays, 19 fewer than Iowa ran. (Iowa also dominated the time of possession, 34:25 to 25:35, in case you still required more proof of the worthlessness of that stat.)

Of course, despite possessing the ball for nine minutes less than Iowa and running 19 fewer plays, Northwestern amassed almost 100 more yards and (most importantly) 11 more points. How? With an explosive, big play running attack, that's how. Northwestern ran the ball 49 times for 349 yards (and 3 TDs), a staggering 7.1 yards per carry average. Kain Colter, restored to the primary quarterback/playmaker position after the jNW offense floundered with Trevor Siemian at the helm, had five runs of 10+ yards and jitterbug running back Venric Mark scooted for five runs of 10+ yards as well (including a back-breaking 72-yard run in the second quarter after Iowa had pinned Northwestern at their own 1-yard line (punting is... not winning?). Hell, even Mike Trumpy had two runs of 10+ yards. Colter finished with 166 yards and 3 TDs on 26 carries; Mark finished with 162 yards on 16 carries.

Early on, Colter gutted Iowa's defense in a way that should be very familiar to Iowa fans -- scrambling for big gains on designed pass plays. But it didn't take long before Northwestern stopped even bothering with the pretense of passing the football and just ran the ball down Iowa's throat because we had no answers for it. As for the culprit on the Iowa side... take your pick -- bad tackling, bad positioning, and bad planning were all on display Saturday. This was a day to forget for the Iowa defense. The most troubling thing is that it was the second terrible game in a row for the defense; a week ago Penn State and Matt McGloin picked them apart through the air (which opened things up on the ground). Then again, we knew before the season that things could get rough for the defense this year -- it turns out that fear was very, very real.

Don't forget about me. The defense takes headline status this week for getting ripped to shreds by Colter and Mark but it was -- surprise, surprise -- yet another dismal showing by the offense. The announcers during the game and some writers after the game all noted that this was actually one of James Vandenberg's better games of the season and the fact that they were saying that after a game in which he went 24/38 for 214 yards (63% completion, 5.6 yards per attempt), 0 TD, 0 INT says everything about how bad the offense (and JVB) has been this year. It actually was his fourth-highest passing yards total this year (he threw for 236 yards against Iowa State, 228 yards against Northern Iowa, and 215 yards against Central Michigan) and the first time in four tries against Big Ten opposition that he cracked 60% completion and 200 yards. (That Iowa has won two Big Ten games already this year with level of production at QB is either kind of remarkable or yet another indictment of the league. Maybe both.) FUN FACT! Steele Jantz threw more touchdown passes against Baylor last night (5) than James Vandenberg has thrown all season (3).

This offense is sick, by which I mean that it is coughing blood and in dire need of medical attention, not that it is totally cool, to use the parlance of today's youth. Its sickness was apparent early on, when Iowa could only muster a field goal to match Northwestern after their opening drive touchdown and when they intercepted a rare Northwestern pass immediately on their next drive and ended up punting. Its sickness was apparent in the three -- three! -- fucking delay of game penalties they took, including one near the end of the game when Iowa was trying to run its "hurry up" offense, another on 4th and 3 from the NW 33 in the first quarter, and one on the fourth offensive play of the game for Iowa. This with a fifth-year senior at quarterback. Its sickness was apparent in the offense's inability to stretch the field, especially late in the game when Iowa needed to pick up big chunks of yards at a go -- and instead meandered incrementally down the field like a cow moseying through a pasture.

On one hand, the offense's anemic production yesterday wasn't too far off from their season averages -- they scored 17 points (they average 20.4 points per game) and accumulated 336 yards of offense (they average 325.9 yards per game). On the other hand, both those figures were below what the Northwestern defense concedes on average (22.3 points per game, 393.8 yards per game), meaning that it was yet another game where the Northwestern defense played Iowa -- and improved their season averages. Since the point binge of 2001-02 against Northwestern (59 and 62, respectively), Iowa has scored more than 17 points in just three of their eight games against jNW during that span. Not surprisingly, they've lost all five of the games in which they scored 17 points or less. Against Northwestern, the Iowa offense historically gets even more impotent than usual, which is a baffling and maddening trend.

But were there bright spots in the offense yesterday? A few, I suppose. Mark Weisman returned from his ankle injury only to go down with a new leg injury (like the mounties, AIRBHG always gets his man eventually), but Damon Bullock made his first appearance in over a month and acquitted himself pretty well: 107 yards on 22 carries. Aside from an annoying tendency of running right up his blockers' asses, he looked pretty solid yesterday. He was also a welcome addition to the passing game, catching five passes for 41 yards and providing a more dangerous receiving option coming out of the backfield than Iowa has had in recent years. And some fresh faces actually caught passes yesterday -- Tevaun Smith (1 catch, 16 yards) and Jacob Hillyer (1 catch, 15 yards). I'm sure they'll go back into witness protection for the next four games now, but it was nice to see someone else making plays for the receivers and giving us a touch of hope for the future. (The receivers also dropped more than a couple passes, which didn't help matters.)

Least awful is still bad, you know. The special teams was probably the least awful part of Iowa's game yesterday -- Mike Meyer bounced back from his 0/2 outing against Penn State to drill a 40-yard field goal and Venric Mark was bottled up in the return game. On the other hand, Iowa didn't get much going on their own returns (Cotton did not continue his streak of returning a kickoff for a touchdown, whether it counted or not) and the one really bad play they made -- the punt that Northwestern blocked early in the third quarter, was effectively a deathblow for the game. It gave Northwestern possession at the Iowa 4-yard line; one play later, Northwestern was up 21-3 and any hopes of an Iowa comeback were on life support. Iowa gave up big plays to Northwestern in the running game, the passing game, and even the special teams game -- that's a recipe for disaster.

On the other hand, we probably had no chance yesterday anyway. I mean, we were up against a Fat Jedi. 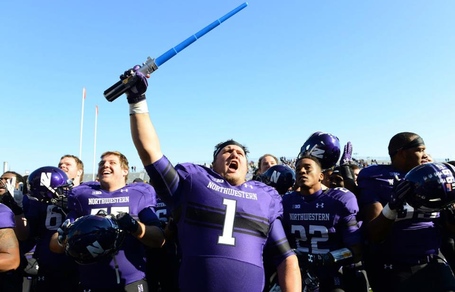 What hope did we have against that? Especially with Jar Jar Vandenberg leading our forces.

Also, Northwestern continued their fine tradition of using attending a sporting event as cover for getting in some quality readin' time: 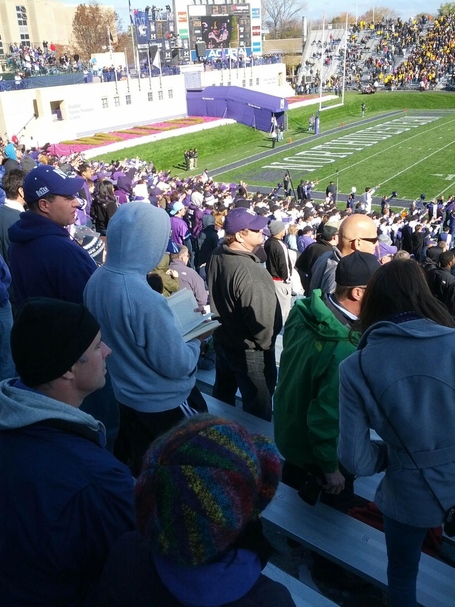