When you see the words "terrible" and "passing" together, I know what you're thinking: Iowa's offense. But lo and behold, I'm talking about Northwestern and its 2 QB system mess.

Share All sharing options for: A TERRIBLE PASSING OFFENSE

In the past 3 weeks who is completing just 53% of their passes, averaging less than 4 yards per attempt, and has a QB efficiency rating under 100? If you said James Vandenberg, then you were close, but wrong...He is completing right around 53% of his passes and has a QB rating under 100, but is averaging 5 yards per attempt (which, yeah, is still pretty dreadful). What I'm talking about, though, is the performance of Northwestern's quarterbacking duo, Trevor Siemian and Kain Colter, in their last 3 games.

Northwestern started its season on a 5-0 run. Its 2 quarterback system was working with Colter making plays at just about every offensive skill position and Siemian completing 69% of his throws. The Wildcats were averaging over 200 passing yards per game and the offense looked dangerous. Against Boston College in week 3, the QBs played their best going 30 of 40 for 267 yards.

But things have quickly taken a turn and the Wildcat passing attack has looked a lot more Iowa than Penn State. Against Minnesota 2 weeks ago, Northwestern threw for just 67 yards. Last week versus Nebraska, the Wildcats had 121 yards on 37 attempts (a whooping 3.3 yards per attempt...Vandenberg's worst ypa this year was 3.7 against MSU) and completed just 43.2% of their passes (JVB's worst was 47.2 against PSU). 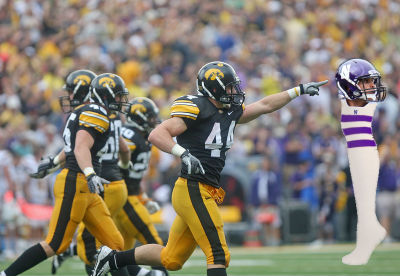 To start the season Colter and Siemian splits snaps and passes pretty evenly. Colter had a slight edge with 65 passing attempts to Siemian's 52. But once the B1G rolled around things have changed dramatically. Siemian has been the primary passing QB while Colter has shifted mainly to slot receiver/the running quarterback. Against Penn State, Colter didn't attempt a pass, and against Indiana and Nebraska he threw a total of 5.

The Wildcat offense has become pretty predictable. With Siemian, look for a quick passing game. With Colter, look for zone-reads and option plays. It sounds a little like Iowa where they have two different offenses going that don't really mesh...one for throwing the ball and one for running. The difference is that they really tip off the defense by the QB in the game. As a result, Colter has said "we don't have an identity."

So on Saturday, the Hawkeyes are going to need to take advantage of Northwestern's struggles passing the ball. The defense should keep the box loaded and force the pass. Northwestern has dinked and dunked all the way down the field against Iowa countless times in the past few years, but that's just not going to work completing passes just over half of the time.

Then the hope here, is that Iowa can turn this game into a slopfest a la Michigan State two weeks ago where neither team can pass or consistently move the ball. Because, hey, it already worked once this year....right?

The moral of the story - When your team gets stomped 14-38 and your quarterback plays awful, just ignore it and point out that your next opponent can't pass either.