Since we have plenty of time before the next game we thought we'd use the most realistic College Football simulator on Earth to determine the outcome of Iowa's next game.

Share All sharing options for: Bye Week: The Most Realistic Iowa At Michigan State NCAA 2013 Simulation

Okay, EA Sports NCAA 2013 has been out for an eternity, but we're a busy bunch. Finally, with Iowa football having a week off, we have time to simulate some Iowa games on the Playstation 3. Iowa doesn't travel to Michigan State until next week but it's never too early to look ahead.

Since NCAA 2013 came out in July, we needed to make a few roster tweaks before we could play the game. I had to create Mark Weisman and used RB #30 as a starting point since he no longer is with the team. I feel like this is pretty close to representing Weisman in the game. 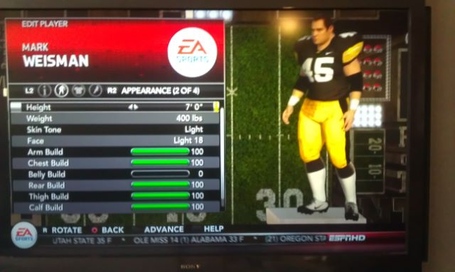 And his game rankings: 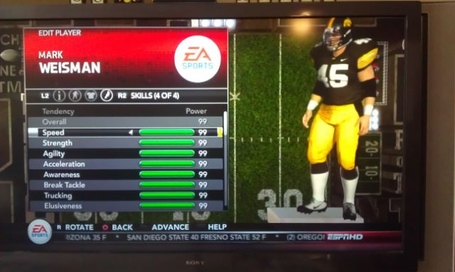 I allowed The Weather Channel to pick an overcast, 55 degree day in East Lansing. I also tweaked the game's artificial intelligence to make this the most realistic simulation on the World Wide Web.

Mark Dantonio started off the game with some psychological tricks electing to receive after winning the toss. Le'Veon Bell took a hand off on the game's first play and rushed for 15 yards. Iowa's defense stepped up on the next three plays and forced an MSU punt on fourth and four.

Iowa started their drive on their own 21 yard line following the MSU punt. The Michigan State defense forced Iowa into a third and four but a tough run by Weisman kept the possession going. Two plays later Weisman broke though the stout Spartan defense and Iowa had their first touchdown on the day.

On Michigan State's very next possession, Andrew Maxwell tried to stretch the Iowa defense with a deep pass down the right side of the field. Micah Hyde was there in man-coverage to snag the ball out of the air and net Iowa their first turnover of the game. With a 7-0 lead and the ball, Iowa had all the momentum on their side.

Oh buddy! This is getting exciting! Weisman is proving to be too much in the early game for Michigan State. Iowa drives 60 yards on eight plays and Weisman pushes through from three yards out to put Iowa up two scores. If MSU doesn't find an answer to the Juggernaut this one could get ugly.

Iowa forced yet another Michigan State three-and-out following the kickoff. The Hawkeyes took over and James Vandenberg found Zach Derby for 15 yards on a play-action pass. The Hawkeyes then hurried to the line to run some no-huddle, feeling momentum was on their side and Michigan State was reeling. Interestingly, while not part of this year's game, the ambulance came onto the field. 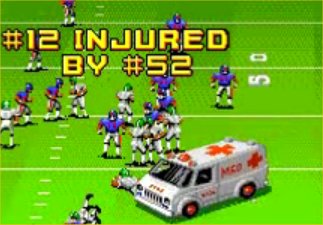 It appeared as if MSU players were dropping like flies in attempt to slow the game and slow Iowa's no-huddle passing attack. Iowa kept pounding with Weisman and after another methodical drive it was Iowa 21, Michigan State 0.

Wow, this super-realistic simulation is really giving hope for us Hawkeye fans. An Iowa blitz resulted in this amazing Nico Law interception and return for a touchdown. Andrew Maxwell suffered a concussion on the play and will miss the remainder of the game. It's all Iowa early in East Lansing.

It was a heavy dose of Mark Weisman as Iowa ran clock and started to think about the next game versus Penn State. Iowa was able to get out of East Lansing with a surprising road victory and keep everyone healthy.

Here's the final game stats for this super-realistic simulation: