Fran McCaffery gave a press conference yesterday as a part of Iowa basketball's media day. We sort through his comments for omens and portents of the season to come.

Share All sharing options for: Fran McCaffery Press Conference: Reading Between the Lines 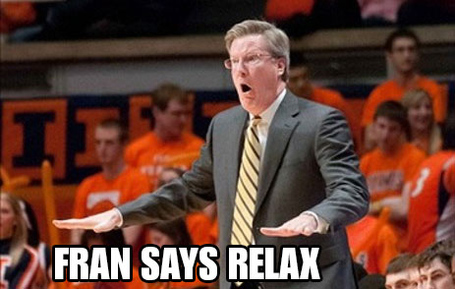 In this new feature, our body language experts, verbal analysts and symbologists analyze what might appear on first glance to be standard sports press conference boilerplate. Just as Kremlinologists attempted to penetrate the opaque secrecy of the Soviet government, our Carver-Hawk-ologists will get you the real scoop on what the Iowa coaching staff is thinking.

WHAT FRAN SAID: "There is a good shot that we'll have somebody red shirt because of our numbers situation. But to tell you who that might be at this point probably doesn't make any sense, because if somebody gets hurt, that will eventually mean if somebody does get hurt, that's who we'd red shirt."

WHAT FRAN MEANT: Clearly no decisions have been made, but the Hawks do look to have a bit of a minutes logjam to sort out, especially at shooting guard. Devyn Marble, Eric May, Josh Oglesby, and Pat Ingram are all, arguably, shooting guards, and you can be sure that Marble will eat up the lion's share of those minutes. Also, Kyle Meyer is behind several veteran players at power forward: Zach McCabe, Melsahn Basabe, and Aaron White will all likely share minutes at the four, meaning Meyer could be left out.

WHAT FRAN SAID: "I think Eric [May] is going to have a great year for us. He's in great shape. He's playing with a lot of confidence right now. He's healthy as he's ever been. This will be year three playing for me in terms of what we do and how he fits. I know that he's hungry to have a senior year that he'll be able to remember. And I hope that that's how it works out."

WHAT FRAN MEANT: May has recovered from the back injury that limited him last year and is apparently in shape and ready to contribute. It will be interesting to see where he finds minutes, though, as the small forward position seems to be Aaron White's (see below) and shooting guard is Devyn Marble's.

Also, May is apparently the protagonist from the movie Memento, always hoping that his memory will last long enough for him to remember who he is, how he got where he is, and the events of the past academic year. Also, Eric May is apparently starving, perhaps because he cannot remember where nearby restaurants or dining halls are located. 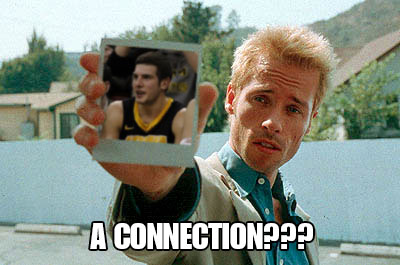 WHAT FRAN SAID: "I expect [Adam Woodbury and Mike Gesell] to obviously contribute immediately. I think what we all hope for when we recruit freshmen is they don't play like freshmen. I don't think they will. Now they may have some freshmen moments, but both of them are incredibly mentally tough, physically ready, and of course they're both going to get better and I'm very confident they'll be good players right of [sic] the bat, and most importantly, be consistent performers right of [sic] the bat."

WHAT FRAN MEANT: Both Woodbury and Gesell will play significant minutes from the start. We may even see both players start, although I would expect Gesell to be the surer bet there, despite his lower profile. I could see the coaching staff limiting Woodbury's minutes as he builds up the strength and stamina needed for the Big Ten season. Also, those "right of the bat" comments: Zach McCabe is known as "The Bat" both for his nocturnal habits, his diet of thousands of small bugs, and his ability to seemingly fly through the air during games. Gesell and Woodbury will succeed coming off of screens by McCabe, but only to the right, as McCabe refuses to screen left, thus earning him the alternate nicknames, "The Brat", "Zach-Bat-Brat" or, worst of all, "Zach Braff." 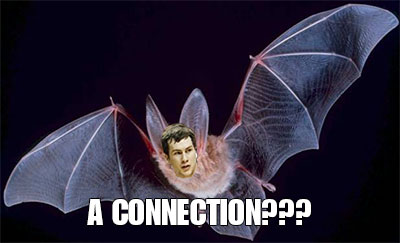 WHAT FRAN SAID: "In order to [make the NCAA tournament], we're going to need fresh legs, and we have those. But the practices this year will be so much more competitive than they've been in the previous two years, where players are going after playing time."

WHAT FRAN MEANT: Minutes distribution will be the great mystery this year. Is it better for a team to figure out which players are the best and give them heavy minutes, or to distribute the minutes more equally between all the players? College basketball games (and seasons) are short enough that coaches can get away with running their best players 30-40 minutes a night, but Iowa will have the option of going slightly deeper this year.

Also, the team has adopted a cannibalistic diet of human legs in the hopes of gaining the endurance of the victims. Coach McCaffery, in a gruesome twist, is awarding the joints as prizes for successful competition in practice. Also, the Iowa cross country team has gone missing. 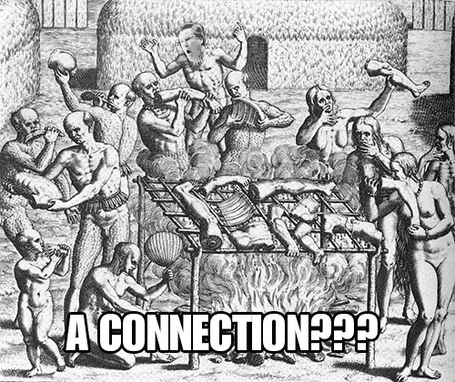 WHAT FRAN SAID: Well, I need [Devyn Marble] to take that next step, which I think he will. The reason I think he will is I watched him this summer and this spring, and in the fall, and I saw someone who is determined to continue to get better. We saw a skinny freshman have some phenomenal moments, then we saw him establish himself in this conference as one of the premier players in the league last year. So now what's that next step? We've got to be a little more consistent. He's really worked on his shot. He obviously can score the ball, but his shooting is going to have to be a little more consistent. I'd like to see him sort of settle into that role where Matt was last year, as maybe our go to guy, our go to guy late.

Marble will have the ball in his hands a lot, especially at the end of games. It will be interesting to see how Fran incorporates a pure point guard like Gesell and Marble, especially when Marble takes over ball-handling in clutch situations. Gesell better work on his spot-up three-pointer.

Also, while discussing strategy in Coach McCaffery's office last spring, the coaching staff observed 6'1", 130 lb. freshman Stephen Tilly accidentally ride his bicycle the wrong way down the Highway 6 exit ramp. Tilly proceded to weave through rush hour traffic for 30 seconds before diving off his bicycle seconds before it was crushed by a semi truck. Tilly capped off the amazing performance by landing six perfect handsprings as he dove to safety.

WHAT FRAN SAID: "Aaron White's role will be a little bit different in that he's going to play some three. He likes that, but he was a difficult cover for most fours, no matter who we were to play against. So for him now, he's really worked on his pull up jumper, coming off screens, hitting jump shots, shot fake drive. He needs to finish a little bit better, because he can get to the rim any time he wants and his stamina has to improve. He struggled last year with that, with just being a freshman who as the season went on, I think, got a little bit tired at times. We had them logging a lot of minutes. So this year, for example, he's going to play four. He's going to play three. He's going to have to guard threes and fours, and I'd like to see him step up offensively and take those 11 points to 15 or 16, which I think he's capable of doing."

WHAT FRAN MEANT: Aaron White may be playing small forward, which has interesting implications. That would suggest that Fran is looking to put McCabe/Basabe at the four, Woodbury/Olaseni at the five. That leaves just two spots for Devyn Marble, Eric May, Josh Oglesby, Mike Gesell, Pat Ingram and Anthony Clemmons. I would guess Eric May to slide to three as White's back-up, or for Fran to go with a small-ball line-up of McCabe at five, White at four, May at three, Marble at two, and Gesell at one. We shall see!

Oh, and I suppose a joke interpretation, too. Aaron White looks a little like Uncle Fester with his new haircut.

WHAT FRAN SAID: Well, Melsahn, I think the key for him is number one, what kind of shape is he in? Last year I don't think it was all his fault. We felt like he needed to put on weight, and he did. Turned out he wasn't as good a player at 235 as he was at 222. So he's back down physically where he needs to be.... In terms of Zach [McCabe], I mean, Zach has sort of been the model of consistency, except his freshman year he turned the ball over a lot. Way too much. Part of that wasn't his fault. It was my fault. I had to play him at the three, and that was a little out of position for him then. Now he can play the three, play the four, play the five. Smart enough to remember where to go on all three positions. Probably one of our best shooters without question. And again, another guy that's really strong with 235, playing with a tremendous amount of confidence. He's giving us a lot of versatility when we look at personnel.

WHAT FRAN MEANT: Coach McCaffery has a martyr complex and feels the need to heap upon himself the faults of all those around him. We also infer that this is his favorite movie scene.

Also, McCaffery apparently sees McCabe as more of a four or a five than three, supporting the theory that we may be in for a lot of McCabe/White/Basabe (or Woodbury or Olaseni) front lines. 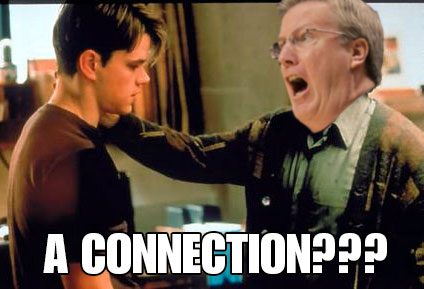 WHAT FRAN SAID: "It would have been easy to point fingers at that point in time, because there was so much wrong. It was not just the Creighton game. It was three or four others in that stretch where you're wondering what's it going to be like? You're thinking it's only going to get worse. We're going into the Big Ten. We're going to be playing really good teams, Final Four caliber teams. How is it going to get better? Well it's going to get better if we make it better, and we put the time in. We have great senior leadership, and I have a great staff, and what we're able to do is continue to let these guys play and improve their confidence level. Because at that point in time, there was no question that it was at an all-time low. The other thing was, and we improved it a little bit. Defensively in those games that you're referring to we were atrocious. We got better. Now we're not where we need to be, but we got better. And that was something that was addressed directly at that point in time. And that was something addressed directly at that point and a major point in turning things around.

WHAT FRAN MEANT: The team was atrocious defensively last year.

WHAT FRAN SAID: "I think consistency is the key to pretty much anything. You break each player down, and a lot of times the guy that will get you 6.4 every night is better than a guy that gives you 18.2."