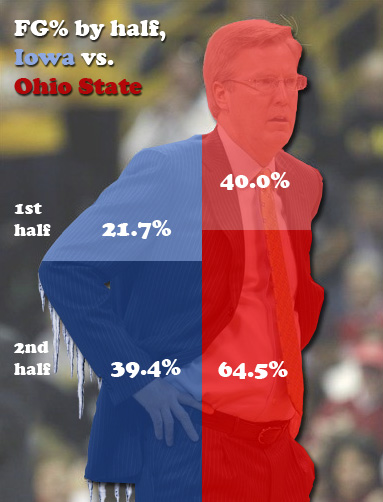 In a game the Hawks lost by 29 and could have lost by more, it may surprise you to learn that Iowa actually played almost perfectly for half of the game -- well, at least on one side of the floor. In the first half, Iowa held the high-powered Ohio State offense to just 28 points on 40% shooting, forced seven turnovers, and held the non-Jared Sullinger portion of the Buckeye squad to just 13 points. They fronted Sullinger effectively (at least for a while), mixed in some zone, and took advantage of a hyped-up Carver crowd to hold the Buckeyes to just nine points in the first nine minutes. And if they had managed even a reasonable facsimile of an offense, they very well could have gone into half tied or even ahead. But they didn't. Boy, how they didn't. Iowa didn't make their first field goal until three minutes into the game, made just five field goals in the entire first half and shot 21.7% from the field. The score at half was 28-19, and it took a heroic effort on defense just to keep things that close.

The lion's share of the credit for Iowa's offensive performance goes to Ohio State. They presented Iowa with a level of athleticism and length that the Hawks hadn't seen before. Iowa's players would frequently drive into the lane on a move that, in the past, had led to an open layup or jumper, only to find two or three Buckeyes laying in wait, ready to swipe at the ball. The quickness and organization of the Buckeyes led directly to 12 turnovers in the first half alone, and needless to say it's not a good sign when your offense has more than twice as many turnovers as field goals, as the Hawkeyes had in the first half. The only thing that kept Iowa even remotely close was their ability to get to the free throw line (8-10 in the first half).

And while it would be tempting to say that Iowa's struggles were just due to outstanding defense, there was also the fact that the Hawks played very, very tight. Iowa had several open looks early in the game, including a point-blank layup for Melsahn Basabe off an in-bounds play and a layup on the break by Eric May that they whiffed on. And as the game went on, Iowa continued to have open looks, including a few from three for Matt Gatens and Josh Oglesby, but those looks just didn't go in. It's hard to say what the cause was, but the impression I got was that the Hawks were shooting like they were constantly afraid that someone was about to block their shot (which was not, admittedly, an unreasonable expectation). There were several times in the first half where Iowa would get the ball in the lane for a 5-7 foot shot, and hurriedly clank it short off the front of the rim. There were also several occasions where an Iowa player found himself with a semi-open shot and passed it up, presumably in the hopes of getting a truly open shot. But against a defense as good as Ohio State's, that truly open shot never came, and the clock eventually forced a truly bad shot. I don't want to make it sound like this game was all Iowa missing open shots, because the virtue of Ohio State's defense was that it did convince Iowa's players they had no time or space to shoot, but just for the record, there were clean looks, and they weren't going in on Saturday.

For a while this was an exceptionally ugly game on both sides: the score was 9-9 at the 10:28 mark in the first half. It was inevitable, though, that Ohio State would start scoring with more efficiency, and when they did, Iowa's failure to score early came back to bite them. My impression was that the Hawks expended a tremendous amount of effort on defense in the first half, then had nothing left to give once the second half started. Ohio State opened the second half as follows: three, layup, three, layup, layup, three, two. On Iowa's first seven possessions, the Hawks went 3-7 with two turnovers. After that, the nine point lead had ballooned to 18, and the game felt effectively over.

It may be that the Hawks were a little too psyched up for this game. The fans were certainly excited, almost manic in the first five minutes of the game, but all that energy may have just served to make Iowa more jumpy and nervous than was entirely healthy. The players were able to give about 10 minutes of ultra-high effort, but after that, they started to look physically and mentally spent. Ohio State, by virtue of the fact that a couple of their starters got in foul trouble in the first half and sat out extended minutes, looked fresh as a daisy, and delivered a remarkable onslaught that killed any hope of a comeback and much of the crowd's enthusiasm. I hope returning fans weren't disappointed by the Hawks' effort, though. Iowa is simply not at the level of this Ohio State team right now. And that's fine -- not many teams in the country are. It would have taken a lot going right for us and a lot going wrong for them for this game to go Iowa's way. That doesn't mean the team isn't making progress or that it's the same team that got blown out by Creighton and Clemson.

For one, Creighton and Clemson didn't have lottery pick NBA power forwards on their teams (although Doug McDermott is pretty darn good). I'm sure Iowa fans were bummed about the outcome, but they did at least get to see a rare basketball talent on Saturday. It reminded me a little of when Glenn Robinson came to Carver and dropped thirty-odd points on the Hawks without breaking a sweat, in the sense that it was abundantly clear that one of these players was at a completely other level. Iowa didn't provide the sternest defense test for Sullinger, but he certainly looked very impressive, making shots from inside and outside with exquisite touch and causing Iowa a great deal of difficulty with his quick hands on defense. I even wonder if the concerns about his height are a tad overblown, given his NBA quality depth -- he's sort of like Tim Duncan in that he's built like a tree trunk and uses that to shield defenders from his shot (and to set a few semi-legal ass screens for driving teammates). He seems to compare well to Luis Scola on the low end and maybe Kevin Love on the high end -- and that's pretty damn good! He's not a defensive stopper, but it's hard to imagine him not scoring 20 and 10 for somebody in the NBA next year.

The Hawks had to contend with the full force of that talent, not to mention Deshaun Thomas, William Buford, Aaron Craft, and several waves of "reserves" who are all, themselves, top recruits, and they didn't have the stamina to match all of that. Their evident nerves didn't help, but this was a pretty clear mismatch from the start. The one thing going forward that may concern Fran McCaffery is that Ohio State figured out a pretty effective defensive strategy against the Hawks and that other teams might copy it: it's nothing novel, but sag off of the three-point line, send an extra defender or two to cut off all drives to the paint, and don't foul. Iowa relies on Marble, Gatens, McCabe and Cartwright getting in the paint for short twos and foul shots, and the Hawks showed a startling inability to pass when confronted with help defense in the paint. Not every team will have the quickness of Ohio State, of course, but many teams will watch this tape and pack the lane just like the Buckeyes did.