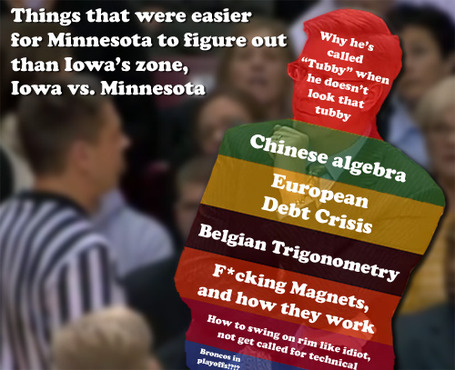 It's hard to believe that one tactical change could make such a difference, but Iowa's switch to a 2-3 zone at the four minute mark in the first half completely changed the course of this game. Until that point, the Gophers had looked unstoppable, building a 32-21 lead and going 14-23 (61%) from the field with six layups or dunks and just two turnovers. After that point, they went 12-35 (34%) from the field, 3-18 from three, had ten turnovers and generally looked completely flummoxed. It was as though Fran McCaffery had cast a spell that turned the aggressive, athletic Gophers into meek, docile rodents.*

* In the Harry Potter universe, this spell would be called "Goferus Zonebrickus".

It was a very smart move that Minnesota inexplicably had no counter for. And it was kind of shocking to see an Iowa zone work effectively at all. Usually when the Hawks go to a zone, it's a 3-2 affair that is quickly torched by three-point shooting and never seen again. But the switch to the 2-3, which places three defenders down low and allows for more trapping in the post, combined with the Gophers inability to hit an outside shot, allowed Iowa to shut down the Minnesota offense almost completely. Credit goes to McCaffery for switching to it when he did, and to the wing players (Zach McCabe, Aaron White and Eric May) maintaining their discipline in the zone and harassing Minnesota's post players whenever they got the ball on the baseline. Some sort of coaching demerit also needs to go to Tubby Smith, who seemingly had no answer or even attempted answer for the zone. The Gophers just kept passing around the perimeter desultorily, then launching up bricks from the perimeter. It was bizarre.

For all that good work on defense, Iowa nearly blew it with a stunningly bad performance at the free throw line in the last minute. Up seven with 39 seconds left, Devyn Marble missed the second of two free throws, and on subsequent possessions Matt Gatens, White and Marble combined to go 0-6 from the stripe. When you consider that Gatens missed the front end of a one-and-one, the Hawks really cost themselves seven points in that last minute, and gave Minnesota a wholly undeserved shot at a tie or win. Luckily Maverick Ahanmisi's layup attempt missed as time expired, and the Hawks were able to walk out with another impressive Big 10 road victory.

But back to the zone, because that was really the story of the game. The Hawks had started the game in mostly man-to-man, but this exposed several serious mismatches, most importantly McCabe or White on Ralph Sampson III. Sampson was able to shoot over those two with ease and started the game with six quick points. Meanwhile the other Gophers looked an order of magnitude more athletic than their Iowa counterparts, getting out on the break and scoring quickly. Frankly, the game had the feeling of a blowout. Then the Hawks got a lucky break, but one that didn't seem like a lucky break at the time: Melsahn Basabe got two quick fouls in succession. That forced Fran McCaffery to go to his bench, and he brought out a player that hasn't been seen much this year: Devon Archie. It's hard to know if Iowa would have switched to the zone if Archie hadn't come in (his length and leaping ability is well-suited to the zone, but he's not the strongest one-on-one defender), and if they hadn't switched to the zone, they may not have won the game. Archie wound up making a huge difference during that stretch of the game, anchoring the zone, altering a three-point shot and coming up with a steal in the closing seconds of the half and passing it up to Aaron White, who finished with a layup that cut the Minnesota lead to one. For a player that played just nine minutes and went 0-0 with zero rebounds, Archie was crucial to Iowa's success, if only because he showed them a way to finally kill all the Gophers.

On offense, the Hawks benefited from strong contributions from Gatens and McCabe. Gatens looked as aggressive as he has all year, going for his shot often and making 7-11 shots (2-5 on threes) for 19 points. I'm not sure who had Gatens for the Gophers (Julian Welch, maybe?), but Gatens used his size advantage to shoot over the Gophers again and again, both from the perimeter and on some decisive moves off the dribble. The senior finished with the uber-efficient scoring line of 72% eFG%, 6 rebounds (3 offensive), three assists, three steals, and zero turnovers. If it weren't for three uncharacteristic missed free throws, it would have been a flawless game. And McCabe, who has really struggled with his outside shot, went 2-2 from deep to go along with four offensive rebounds, 4-4 free throw shooting, and yeoman's work in the zone defense. It would help McCabe's offensive game so much if he could reliably make the three, because that would force teams to cover him on the perimeter, allowing him to get into the basket more easily. A few times in this game he faked the outside shot, got the Minnesota player to bite, then drove to the hoop for either a basket or a foul. He's a load once he gets the ball down low, and can finish quite well at odd angles.

It was a quiet game for Melsahn Basabe and Bryce Cartwright, unfortunately. Basabe really struggles against taller players, and couldn't figure out a way to score over Sampson III. He finished with no points on 0-3 shooting, and played just 11 minutes. Cartwright also took a step back from his brilliant performance against Wisconsin, making several inexplicable unforced turnovers and finishing with six points and two assists. The nice thing about this Hawkeye team is that they do have a bit of depth and versatility, and can afford to have an off game from two of their top players and still win.

And for the Aaron White watchers out there, he played well, if not as phenomenally as he did against Wisconsin. His main contributions were on the offensive glass, where he grabbed three boards, and on the break, where he finished off of the aforementioned Archie steal, and on a dunk off a sweet pass from Cartwright where he raced ahead of the defense and flushed it home.

But, oh, those free throws. The Hawks had the Gophers mentally beaten, but let them back in the game by inexplicably clanging shot after shot off the rim. I don't know if it was nerves or just bad luck, but it came at the worst possible time. The thing Iowa probably does the best on offense right now is draw fouls, and they managed to win the free throw attempt battle by 14 in this game, an impressive feat for a road team in the Big 10. If they had just made more of those shots, this would have been a comfortable victory rather than a nail-biter. A win is a win, though, and the Hawks are already roughly half-way to the number of conference victories most of us (myself included) thought the team would win this year.

The referees were mostly fine, I thought, but there were a couple egregious missed calls in the second half that I just have to mention. The first was when Rodney Williams got a dunk and then basically did a chin-up on the rim and waved his legs/crotchal region in Zach McCabe's face for a good five seconds: 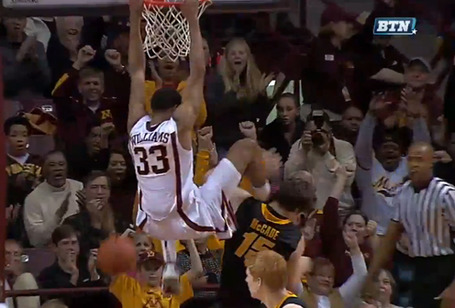 The ref gave Williams a stern talking-to after the play, but I think the rule book is clear here:

6.1. Class B Technical Infractions... f. Grasping either basket in an excessive, emphatic manner during the officials’ jurisdiction when the player is not, in the judgment of an official, trying to prevent an obvious injury to self or others.

Considering that Williams swung into McCabe and could have just dropped to the ground without impediment, it seems like this was just obnoxiousness on his part. The Hawks should have gotten two shots and the ball here.

The second was a 10-second call that wasn't called, where Iowa pressed Minnesota and their guard clearly didn't get the ball over the half-court line in time:

Iowa won and, again, the refs were mostly fine, but these two calls were just so clearly off that I wanted to mention them.