Share All sharing options for: And The 'Stache Shall Lead Them: #5 Iowa Wrestling Beats #3 Minnesota, 19-17

All's well that ends well, right? The final result of yesterday's dual meet with Minnesota (a 19-17 Iowa win, Iowa's 7th straight over the Gophers) was good, even if the way Iowa got there (losing the final four matches of the meet) wasn't so hot. Iowa and Minnesota each won five matches, but Iowa got a major decision from Nick Moore and a pin from Mike Evans (and his 'stache), which trumped the pair of major decisions that Minnesota got from Dylan Ness and Kevin Steinhaus. Iowa got off to a hot start with a fairly dominating 7-1 decision win from Matt McDonough over top-ranked Zach Sanders (though McD should regain his top spot in the rankings this week), kept the momentum rolling through nervy wins from Ramos and Marion over the Dardanes brothers, watched Mike Kelly stumble in an action-packed match at 149, jumped out to a big lead with the aforementioned bonus point wins from Moore and Evans at 157 and 165, and then just tried to hold on through the final four matches. Even if it wasn't always pretty, though, any win was nice to see after Iowa's miserable 0-2 weekend the week prior.

There's a decent chance Iowa could have another dual meet with Minnesota before the year is out (in the National Duals semifinals or finals), so we'd do well to try to improve on a few of these results if we want to again beat the Gophers. If Marion gives up a late takedown, we lose this dual. On the other hand, if Lofthouse doesn't quit wrestling in the third period and Gambrall is just a little bit better, we could have won in a rout.

125: This was about as dominant a 7-1 decision win as you're likely to ever see. McDonough was better than Sanders on his feet, better in scrambles, and better on the mat. He's just plain better. His length and strength makes him a poor matchup for Sanders and while I'd never say that Sanders will never beat McDonough... it's going to be hard for him to do. He tried stuffing McD on his feet and was successful for a while... but McDonough eventually got him down. He tried coming out on top in a scramble... but McD was the one who emerged with a takedown. He struggled to escape McD's rides as well. He's a very good wrestler; McDonough is just better.

133: A very nervy match for Tony against young Dardanes, but he came out on top. His takedown with three seconds left in the second period was huge, and while he gave those points back (sort of) by giving up a reversal to Dardanes in the third, it was only after he'd been able to ride Dardanes for long enough to secure a riding time point (a noteworthy accomplishment, since that's something Tony has struggled with against high-end competition) and that, along with the pair of escapes he recorded, was enough to give him the winning margin. It was a difficult match, though, and it would be probably be nice if Tony could get on side of the bracket at Big Tens with Dardanes and Logan Stieber on the other side.

141: Marion Marion Marion... what more is there to say? "Bad Marion" made another reappearance this week, although Montell was just good enough to eke out a win anyway. Dardanes is a quality opponent, but Marion's lack of activity (again) and late attempt to just hold on to the slenderest of leads was... I don't know if "frustrating" is a strong enough word. Exasperating, maybe? I don't know if he just thinks he can flip a switch when the bright lights of the Big Ten Tournament and NCAA Tournament start shining, but the way he's wrestling now makes it impossible to have any confidence in him.

149: Well, this certainly wasn't a boring match, by any stretch of the imagination... Ness and Kelly traded points in a wild first period, but Ness ultimately turned the tide in his favor with a really slick throw that enabled him to score nearfall points. Kelly tried hard here, but Ness just seemed far too slick for him in this match.

157: Well well well... now there's the Nick Moore we'd been hoping to see for a while. Ortiz isn't a very good opponent, but Moore looked confident and aggressive. He pushed the pace, scored a few nice takedowns, and got some great nearfall points on a move that was only saved from being a pin by Ortiz's uncanny bridging ability. We shouldn't take too much away from this match given the quality of the opposition, but it was very nice to finally see Nick Moore cut loose a bit and give us a glimpse of the guy who won four Iowa state titles.

165: Good lord, that 'stache... I haven't seen a close-up of it anywhere, but it was stunning in its majestic creepyness: 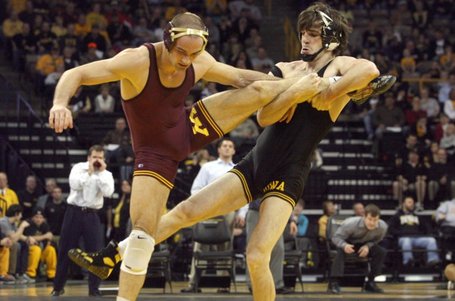 Perhaps Yohn was so unnerved by it that he lost the capability to do, well, anything. Evans dominated him from start to finish -- on his feet, on the mat, everywhere -- and was cruising to an easy major decision win when he managed to use his impressive mat skills to turn Yohn and pin him halfway through the third period. Please please please let this Evans show up for Iowa the rest of the year (and bring the 'stache along, too -- JayBo rode a weird-looking musstache all the way to a national title in 2010).

174: And here we have our biggest WTF match of the night. For the better part of five minutes, Ethen Lofthouse looked pretty good. He was defending Storley's offense well, got an escape, and secured a nice takedown to build a 3-0 lead as time was winding down in the second period. For all intents and purposes, he was solidly in control of the match. Then, seconds before time ran out in the second period, he gave up a takedown to Storley, cutting his lead to 3-2. A reversal shortly into the third period gave Storley a 4-3 lead, but all Lofthouse needed to do to tie it up was get an escape. Which he didn't get. In fact, he never even came close to getting an escape. He barely did anything for the remainder of the match after the reversal and was deservedly dinged for stalling. He appared to completely shut down after the reversal, which was hugely frustrating. Lofthouse has been an absolute mess lately, which is not good news with National Duals, Big Tens, and the NCAA Tournament looming.

184: See 149, but replace Kelly with Wagner and Ness with Steinhaus. Wagner's effort is never lacking (you almost never see him get hit with a stall call for inactivity), but he just has precious few answers for guys that are really skilled. Steinhaus, unfortunately, ran a bit of a takedown clinic on him here. It was curious that Steinhaus didn't spend more time trying to get a tech fall or a fall here, though, since by this point in the meet they needed as many bonus points as possible.

197: Gambrall is still losing matches, which is disappointing, but... he does look better, at least. He's more active, in better shape, and generally looks a bit more like the Gambrall we saw last year (who was also frustrating to watch, but at least won quite a few matches for Iowa). His biggest problem now appears to be size and strength (or lack thereof); he looked noticeably smaller than Yohn. He certainly looked like a guy on his way down to 184; we'll have to keep an eye on that for the next few weeks. So, disappointing that he lost, but honestly at this point he may no longer be one of the three most frustrating wrestlers on the team (I'd rank him behind Marion, Lofthouse, and the gestalt Blakeby Rasford entity right now).

HWT: Bobby Telford competed in the Grand View Open this weekend, coming in 2nd to Eric Thompson (Wisconsin?), which cleared the way for Blake Rasing to get another start at HWT for Iowa. (Remember when I said Midlands might be the last time we saw Blake start for Iowa in meaningful competition? Oh, how wrong I was...) Even without taking into account Telford's recent slump, the move to start Rasing made some sense, given Rasing's 3-0 career record against Nelson. Alas, unlike McD, Rasing couldn't improve his perfect career mark against his Gopher opponent. Nelson has improved since last year; it's hard to say the same for Blake. On the bright side, this was an usually active heavyweight match, so at least it wasn't as mind-numbingly dull as so many of them.

NEXT: Iowa concludes its dual meet season with a home meet against B1G bottom-feeder Wisconsin. There will be (Badger) blood. Expect a rout in this one.