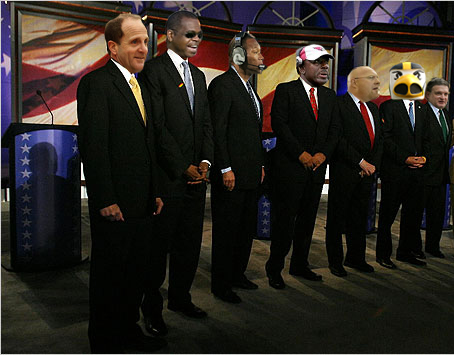 Nice to be here.

It's great to be back in Iowa City.

How you doin' Gary?

WHO'S READY TO SWEAT?!

You had to put me next to him?

And last but not least - Herky the Hawkeye.

Thank you gentlemen for being here. We start with your opening statements, but first lets pause 30 seconds for station identification.

If there is one thing that this program is built on; its stability. Do we really want to go in an entirely new direction... no offense.

Wait... wait... I don't mean to stop you here, but I have a question for you Phil Parker. Are you a fan of nepotism? Because this is all this is. One Parker retires and of course, another Parker needs to take his place. Gimme a break. We want someone who is not going to ride the coattails of his father, we need Herky in 2012.

I'm not related to Norm. At all. We only share a last name, it's mere conicidence.

Folks, do you really believe that?

Okay, let's move onto a Napa Know-How scenario. Darrell Wilson, it's 3rd down and 8 on the 40 yard line in the fourth quarter and the score is tied, what do you do?

I think in that situation, we play smart. We try to get a nice push up front and we rely on our corners to pl...

...aggressively and hopefully give us the ball back.

Gary, can I butt in? Darrell is clueless, it's obvious we have the ball in this situation. And you know what I'd do - I'd have our quarterback throw a long bomb that would be caught for a touchdown.

Why would the moderator ask a group of defensive coordinator candidates a question about offense?

Poor Darrell. Always thinking inside the box. Don't the Hawkeyes deserve a defensive coordinator, who knows what to do in all situations?

Okay, we have a fan question.

Yeah, this is for Ron. How has working with Arizona helped you in case you become defensive coordinator?

If I could field this one. I've prepared a helpful visual aid to answer that question. 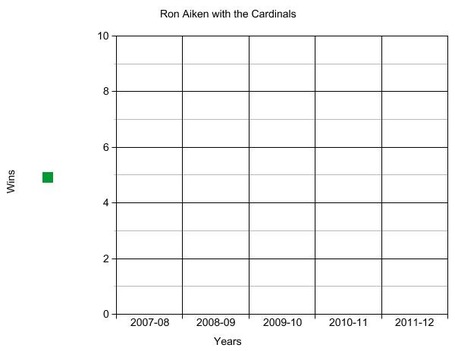 Now in case you didn't see the chart. Arizona has not won a single game since Aiken came to town. Know what the Cardinals learned? How to lose.

Now wait a minute, we went to the Super Bowl three years ago.

Sure you did. The Cardinals in the Super Bowl? Is this the kind of crazy talk we want spouted off by our defensive coordinator?

Alright. William Inge. You've kind of bounced around the college football landscape, can we reasonably expect you to stay at Iowa for a long period of time?

Well, I've always called the Hawkeyes my home and it would be great to be home again.

I have my own question for Inge - is it true that you said and I quote: "Kirk Ferentz is a fart head?" 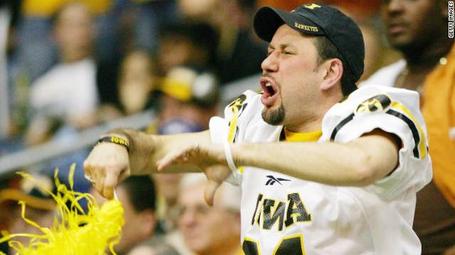 Thank you Herky. We have another scenario, this one for Chris Doyle.

Ummm moving on. Biff Poggi, you are the fath-

Okay then. Herky the Hawkeye. We finish with you. Why should you be Iowa's defensive coordinator.

One reason and one reason only. I am awesome and I am American unlike these guys. Look who we have up here (points) an idiot, a bozo, a jabroni, a loser, a hot head and a, well Poggi left, but you get the picture. You want them over me? I'm Herky. What more do you want? I'll put in terms anyone can understand - ‘You want your defense to rock? Make sure to pick the Hawk!' Now who's with me - U-S-A! U-S-A! U-S-A! U-S-A!

And I guess that's all for the University of Iowa football team defensive coordinator debate sponsored by Kum & Go. I'm Gary Dolphin so long folks.

You were right this was easy, but why?

It was the only way to get Kirk to look away from the program and try something different.

Nah. Kirk will still pick somebody in-house and just weather the storm, but you know what, I'll put in a good word for you, we need you on this staff.