We Must Break You Is Still Not Particularly Fond Of Gophers

Share All sharing options for: We Must Break You Is Still Not Particularly Fond Of Gophers

Ending the skid. Tom Brands had a press conference on Tuesday and, shockingly, was not all sunshine and puppy dogs after the first two-meet losing streak of his Iowa head coaching tenure:

"I know one thing, your heads not right when you are losing seven bouts in a match," Brands said. "You’re head isn’t right when your teammates are going down like flies in front of you and you don’t do ANYTHING to stop it.

"It’s going down, boom, boom, boom, now it’s my turn on the mat, what am I going to do? You have to turn that emotion."

It does seem like more of a mental issue than a physical one for several Iowa wrestlers that are struggling right now; hopefully they can get their heads right in a hurry because Minnesota will be a very difficult opponent on Sunday. Meanwhile, the other interesting news item from the presser concerned Grant Gambrall:

Junior Grant Gambrall did offer that he was trying to cut from 197 to 184. When asked if that was an option, Gambrall said "definitely."

"I think that if I’m wrestling to the best of my ability, the weight doesn’t make that big of difference," Gambrall said. "That being said, ‘84 is probably more of my natural weight class."

Weight cut rules mean that Gambrall won't be able to wrestle at 184 for a while yet -- possibly at the National Duals in February or the Big Ten Tournament in March. Whether he actually will wrestle at 184... who knows. I've given up trying to guess what will happen at 184 and 197 this year.

On paper, Iowa is in the easiest regional of the four. They should be the 1-seed; seeds will be announced on Feb. 7. I'll do a more extensive preview at that point, but Iowa should be heavy favorites to win their regional and make it to the final four. 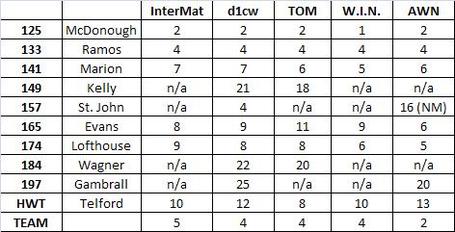 A lot of "N/A"s showing up for Iowa now, which is a problem. Unranked guys don't often score a lot at the NCAA Tournament (and they tend to get tough draws, which makes it even harder to score points), which doesn't bode well for Iowa's title hopes. Ramos slips down to 4th after his loss to Stieber, while Marion falls to the fringes of the top guys at 141 after his own loss to Stieber. (The only oddity is that several polls have him behind Nebraska's Sueflohn... even though Marion beat him just two weeks ago.) St. John finally drops out of most of the polls, while Evans gives up most of the gains he made with the win over Nebraska's Kokesh a few weeks ago.

Previewin' Let's get down to brass tacks and talk about the Iowa-Minnesota dual.

125: #2 Matt McDonough (JR, 21-1) vs. #1 Zach Sanders (SR, 19-0)
This could be the first of four meetings between McD and Sanders this year: here, at National Duals in February (Iowa and Minnesota could meet in the semis or finals there), the Big Ten Tournament in March, and the NCAA Tournament in March. If that happens, it would be reminiscent of McD's quadrilogy with Northwestern's Brandon Precin. That series wound up working out pretty well for McD: after losing to Precin in the Midlands finals, he rebounded to beat him in their final three encounters, including in the Big Ten Tournament finals and again in the NCAA Tournament semifinals. I certainly hope McD sweeps Sanders again this year, but if he has to lose to him, this would be by far the easiest loss to take, since at worst it would just cost Iowa a dual meet win. Mind you, whether or not you think even one Sanders win is likely depends on how much you believe in his improvement this year (and perhaps McD's slight regression). McD has a perfect 4-0 career record against Sanders, with several lopsided wins (he's beaten him 6-4, 13-2, 8-0, and 10-3) and his length has been a consistent problem for Sanders in their past match-ups. Sanders is wrestling at a very high level this season and several guys have managed to stymie McD this year, but it's not clear that Sanders will be able to follow the same gameplan that guys like Precin, Dijulius, and Megaludis have against McD: he's a shorter 125er than them, which will make it harder for him to tie up with McD and still keep his legs away from McD. I don't think this will be as lopsided as past matches in this series, but McD will win a close one.
McD DEC Sanders (Iowa 3-0)

133: #4 Tony Ramos (SO, 20-2) vs. #7 Chris Dardanes (RS FR, 17-4)
Dardanes beat Stieber who beat Ramos, but Ramos beat Futrell twice who beat Dardanes, so good luck getting the transitive property to apply very well here. There's a cluster of very good wrestlers at 133, but I think Ramos rides the energy of the crowd to a solid win here.
Ramos DEC Dardanes (Iowa 6-0)

141: #7 Montell Marion (SR, 18-2) vs. #12 Nick Dardanes (RS FR, 14-4) or UR Seth Lange (RS FR, 22-9)
Lange wrestled against Michigan (and got pinned by Kellen Russell in less than three minutes) on Friday night, which may or may not indicate who's wrestling for Minnesota in this meet. If "good Montell" shows up it shouldn't matter which guys Minny sends out there -- Marion is better than both. Unfortunately, it's no guarantee that "good Montell" makes an appearance. I'm going to guess that he does.
Marion DEC Dardanes/Lange (Iowa 9-0)

149: UR Mike Kelly (RS FR, 12-7) vs. #11 Dylan Ness (RS FR, 13-5)
Ness (brother of former Minnesota national champion Jayson Ness) came into the year with some high expectations and he's had some stumbles, mainly because he's a funky wrestler who has an ability to pin people -- which also gets him into bad positions at times that cost him. If Kelly can avoid Ness' big moves, he could steal a win here. He wrestled hard against Molinaro but I can't justify picking him to get a win here yet.
Ness DEC Kelly (Iowa 9-3)

157: UR Nick Moore (RS FR, 10-7) or UR Derek St. John (SO, 11-1) vs. UR Alec Ortiz (SO, 11-6)
This is a match that Iowa simply must win, if they want to win the dual meet. Ortiz was pressed into service after Jake Dietchler, Minnesota's potential All-American at this weight, was forced to retire from the sport due to concussions. He's not very good. Unfortunately, Iowa's options are a one-legged DSJ and a Nick Moore who seems bereft of confidence right now. I think he finally gets a little something going here, though.
Moore DEC Ortiz (Iowa 12-3)

174: #9 Ethen Lofthouse (SO, 15-5) vs. #7 Logan Storley (FR, 16-3)
Storley is a very good wrestler and Ethen is a very inconsistent wrestler (coming off perhaps the worst performance of his career against Penn State's Ed Ruth last Sunday), so logic would suggest that Storley should win here. But I think there will be an upset or two in this meet and this seems like a good possibility, given Lofthouse's propensity to wrestle better on the mat at CHA than anywhere else.
Lofthouse DEC Storley (Iowa 18-3)

184: UN Vinnie Wagner (SR, 6-7) or RS FR Jeremy Fahler (8-4) vs. #8 Kevin Steinhaus (SO, 18-4)
Wagner held his own for most of the match against Penn State's Quentin Wright last Sunday, which was fairly remarkable; as a reward, he gets to take on another top-notch 184er this week in Steinhaus. I have faith in Vinnie to keep it close(ish), but that's all.
Steinhaus DEC Wagner/Fahler (Iowa 18-6)

HWT: #10 Bobby Telford (RS FR, 14-3) or UN Blake Rasing (SR, 13-5) vs. #4 Tony Nelson (SO, 17-2)
It sounds like Rasing will again get the nod here because Telford is wrestling in the Grand View Open this weekend. Rasing went 1-1 last weekend but does have a 3-0 career record against Nelson (including a win in last year's Big Ten Tournament finals). Still, Nelson seems like he's gotten better this year; I'm not sure the same can be said for Rasing.
Nelson DEC Telford/Rasing (Iowa 18-12)

This looks like another tough dual for Iowa, especially since they don't figure to be huge favorites at any weights. McD and Ramos are Iowa's two best wrestlers, but they're also facing two of Minnesota's best wrestlers, which won't make things easy. Still, I think a little home cooking -- and the desire to erase the taste of last weekend's 0-2 performance -- will be enough for Iowa to post a win here.