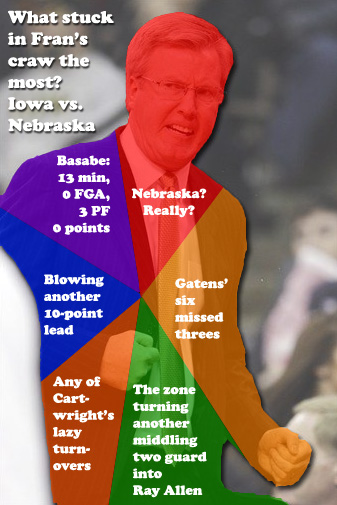 Iowa is going to wish they had this one back. In their first game back after a long layoff, the Hawks showed that they had forgotten everything they had learned during their brief mini-resurgence in January, played abysmal defense, and squandered another large lead. They made one of their weakest opponents look like an offensive juggernaut, and the scary thing was that they showed remarkably little passion doing so.

Consider this: Nebraska is 225th in the country in offensive efficiency, averaging .953 points every time down the floor. Against Iowa, the Cornhuskers averaged 1.29 points per possession, a figure that is miles above even what the best offensive teams in the country average. Iowa too had a great offensive game, too, averaging 1.19 points per possession, far better than their 1.05 season-long average, but the fact that the points were coming so easily was also the key to Iowa's downfall. The game seemed too easy for too long, and Iowa played like they never really took Nebraska seriously. It was a classic example of a team playing down to its competition, allowing them to stay a little too close for a little too long, then succumbing when that team got hot at just the right moment.

There was a time, midway through the first half, when Iowa could have turned the game into a blowout. Nebraska was playing like they expected it to be a blowout, looking listless on offense and turning the ball over, Iowa was scoring with ease, largely thanks to the brilliant play of Zach McCabe, the lead was 11, 31-20. Aaron White had a clear three lined up, and Carver was ready to explode, but the shot rimmed out and Nebraska got a layup on the subsequent possession to cut the lead to eight. Then Bryce Cartwright embarked on a series of baffling mistakes that helped bring the Cornhuskers back into the game.

First Cartwright attempted to thread a pass to Brommer on the pick and roll that was intercepted and led to a foul on the break. Next he missed a point-blank layup, which was rebounded by Nebraska and led to a run-out. Then he committed another turnover, managed to steal the ball back as Nebraska broke up court, only to botch an easy two-on-one play by giving Josh Oglesby a difficult bounce pass instead of an easy chest pass, leading to another run out. Then he capped it off on Iowa's next possession by dribbling around aimlessly for a good 10 seconds, leading to a disorganized possession, a McCabe turnover and another run-out.

It wasn't the reason Iowa lost, but that sequence of possessions did allow Nebraska to close the lead from 11 to three in about a minute and a half and turned a potential blowout into a dogfight. Cartwright had a similar baffling turnover in a crucial moment in the second half, when Iowa was up four with the ball and about eight minutes left. He got in the air while making a pass, only to discover the man he was passing to wasn't open, then passed it to a Nebraska player to avoid a travel, leading to a layup. That cut the lead to two and deflated the Carver crowd.

The main reason Iowa lost, though, was that they returned to the passive defense that has plagued them all season. Specifically, they got absolutely torched in the second half when they ran their zone defense. The zone seemed to work well in the first half, and so Iowa's coaches kept running it in the second half. But they kept running it even after Nebraska figured it out fairly early in the second half. The weakest point in the zone all year has been in the corners. When opponents station shooters just at the wing, the zone does a fine job of covering them, but if they place shooters at the wing and in the corner, Iowa finds itself for whatever reason with one man trying to defend two shooters, leading to open shots. Nebraska got open again and again in the corner, and made five of their seven threes in the second half. They may have gone to the zone to combat the quickness of Nebraska's four-guard line-up, or to cover up their own lack of interior defense (Melsahn Basabe played very limited minutes, which is another story), but it allowed Nebraska to get several clear shots from three. It also hurt Iowa's ability to corral defensive rebounds. Without clear box-out assignments, the Cornhuskers grabbed eight of their ten total offensive rebounds in the second half, including a crucial one with 41 seconds left that denied the Hawks a chance to tie the game.

As much as the game came down to defensive lapses by Iowa, Nebraska made plenty of mistakes of their own. Matt Gatens has never had so many open looks at the basket as in this game -- they just didn't go in. I counted five open threes that Gatens missed (he finished 2-8 from deep). When Brandon Richardson got open looks, he made them, going 6-7 from deep and 9-10 from the field for 25 points. Iowa surely wasn't focused on Richardson going into the game (before last night's game he was averaging about six points a game and 30% three-point shooting). To his credit, he made the shots Iowa gave him. If a couple more Gatens threes had gone in and a couple of Richardson threes hadn't, it would have been a very different game.

One last note on Basabe. He only played 13 minutes, had zero shots, zero points, and one rebound. He got in a bit of foul trouble, but that can't have been the reason he played so little. He finished with only three fouls and was kept off the court during the final five minutes. He looked totally passive on offense, not even trying to score when he had the chance. Something is really wrong with his game right now. His minutes were absorbed by Brommer, who didn't do much of note, and Devon Archie, who played some decent defense and had the play of the night when he deployed a nasty spin move and dunked all over Jorge Brian Diaz (he bricked the subsequent free throw, natch). For the most part, though, Iowa played without a true center, using the small-ball line-up of White-McCabe-May as their front line. White had another very positive game in his quasi-post role, grabbing nine rebounds, five of which were offensive, and scoring points in his usual energetic way, but the lack of a true post player hurt the Hawkeyes down the stretch. On the play where Nebraska got an offensive rebound in the last minute, Iowa had, I believe, White, McCabe, Oglesby, Marble and Gatens on the floor. The shot went up by Nebraska, and because of rotations, the only man under the basket was Oglesby and two Nebraska players. Oglesby had no chance to get the rebound over those two guys, and really it's unfortunate that Iowa was in a position where they had a shooting guard trying to hold down the defensive glass.

This was a very disappointing loss for Iowa, not just because this was one of their expected wins, and not just because this is the kind of loss that probably makes the NIT a pipe dream. It was disappointing because the team played complacently and, well, kind of dumb. They didn't put Nebraska away when they had the chance, they were slow to adjust when Nebraska adjusted to their zone in the second half, and they played like they thought they could easily turn it on and win the game whenever they wanted to. Some of the players didn't play well, but it was also a poor showing by the coaching staff, who kept with the zone far too long, and who neglected to use their timeouts to slow Nebraska down when the game was getting away from them, either in the first or second half (Iowa used its first timeout with three and a half minutes left in the game). This felt like the basketball equivalent of the Minnesota football game this year: Iowa had the better team, played better for much of the game, but through carelessness and lack of focus, allowed the other team to hang around for too long, and lost in the end. Iowa's next game is at Indiana, so let's hope that the good side of their split-personality shows up, and not the team that made Clemson, Campbell and Nebraska look like offensive powerhouses.