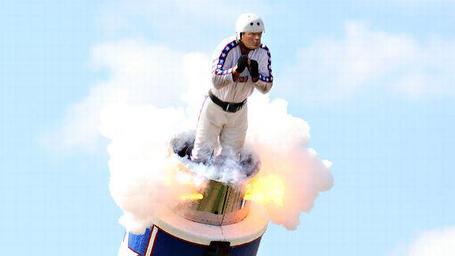 IOWA CITY, IA (AP) -- In a move that shocked his friends, family, members of the University of Iowa administration, and fans of Iowa athletics, Kirk Ferentz, head coach of the Iowa football team, announced his plans to begin a second career as a human cannonball. Ferentz said he got the idea from his recent decision to participate in Saturday's "Arctic Plunge*" event benefiting the Hawkeye Wrestling Club. "Well, I was doing a few practice dips -- not in the Iowa River, of course, I'm not that crazy -- and the feeling was just so exhilarating. It was life-changing, really. I realized then that I had been just stuck in, you know, a little bit of a rut and I needed to just break free. Get free from everything that's been weighing me down lately. Like losing games this fall, or losing a few players this month, or gravity. I'm pretty sick of gravity, to tell you the truth."

Ferentz elaborated on his grudge with gravity. "I'm just sick and tired of gravity. It's been a thorn in my side and a weight on my back for as long as I can remember. It's always keeping me down. People says I punt a lot because I'm a conservative football coach that's scared of his own shadow, which is absolutely untrue. For one thing, I dismissed my shadow for a violation of team rules. For another thing, I punt the ball so much because I like seeing the ball fly through the air in its attempt to deny gravity. Every time I hope that this will be the time that the ball breaks free from gravity's chains and just floats away forever.When I was here in the '80s, I saw a few punts from Reggie Roby that I was sure were going to make it into space. I've been trying to recapture that feeling ever since.

"Also, that whole 'keep your nose to the grindstone' expression? It's not about hard work, it's about the oppressive weight of gravity and its denial of man's inherent desire for freedom. And I, for one, am done giving in to gravity's demands. I want to fly through the air, free and unfettered, and if it takes a cannon and a few pounds of gunpower to do it, so be it."

Ferentz's colleagues sympathized with his desire to shake things up a little bit, but wondered if becoming a human cannonball was taking it too far. "To be honest, I was just hoping he might go for it on fourth down a little bit more or call a fake punt or something," said University of Iowa athletic director Gary Barta. "Or, [expletive deleted], call a flea-flicker, you know? But shoot yourself out of a cannon? That just seems, uh, a little bit out there." Chris Doyle, the strength and conditioning coach of the Iowa football team and noted connosieur of extreme athletic endeavors, agreed that it was a surprisingly bold move from the normally reserved Ferentz. "I know he said he wanted to shake things up a little, but I just thought he might start wearing Windsor collars, you know? Or maybe some unpleated khakis."

Paul Rhoads, head coach of the Iowa State football team, had nothing but praise for Ferentz's decision. "I'm just so gosh-darn proud of Kirk for doing this and following his dreams. It makes me tear up a little just thinking about it, it really does. In fact, it's inspired me to follow one of my own dreams, which is to walk a tight rope between the Campanile and the Union -- without a net! I got the idea when I was watching Man on Wire a few months ago. Good movie, but I knew I could walk farther on a tightrope than that French guy. I can't thank Kirk enough for giving me the courage to do this now." Rhoads' colleague, men's basketball coach Fred Hoiberg, said he had no interest in becoming a daredevil because "being blind would like really suck, even though wearing red pajamas all the time and hitting people with a stick would be totally awesome."

In response to Ferentz's announcement, Iowa football offensive coordinator Ken O'Keefe declared that he would be jumping over the Coralville reservoir on his bike sometime next week. "You heard right, I'm going to take my sweet ten-speed Schwinn and jump the res. I can so do it, too, I don't care what those jerks at the juice bar said. It's gonne be really awesome, just you wait and see."

* It is definitely not the Polar Bear Plunge, in case anyone reading this is of a litigious bent and deeply passionate about certain intellectual property.