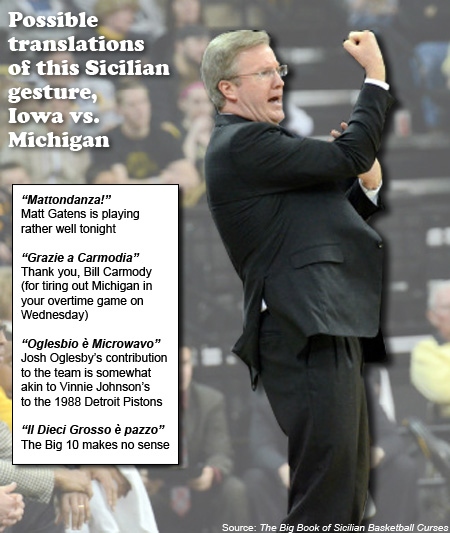 What do you make of a league where Michigan State beats Iowa by 34, Iowa beats Michigan by 16, Michigan beats Northwestern by 2, and Northwestern beats Michigan State by 7? By the transitive property of basketball, Iowa should have lost to Michigan by 43. Instead, Iowa came out and played like a completely different team from the one that sleepwalked through the Michigan State game, while Michigan played like they were half-asleep. Look around the league: Ohio State lost to Illinois, Penn State killed Purdue, Nebraska killed Penn State, and Minnesota beat Indiana in Bloomington. There's no logic here. Teams that look unbeatable one game look lethargic the next, and vice versa. Luckily, the good Iowa showed up against Michigan.

It was clear from the tip that Iowa had more energy in this game. They started off getting the ball into position down low, with Zach McCabe muscling Tim Hardaway Jr. for three consecutive baskets inside, then added layups by Devyn Marble, Melsahn Basabe and Eric May. Michigan came out in man-to-man and didn't switch to Beilein's favored 1-3-1 zone until much later in the game. I don't know if it's a long-term change in strategy away from the zone for the Wolverines (they didn't seem to run it much against Northwestern, either), but the man defense created several beneficial match-ups for the Hawks. Both McCabe and Marble were able to work well in the post when defended by slighter defenders like Hardaway and Trey Burke.

In fact, if it weren't for two three-pointers by Burke and a handful of missed open shots by Matt Gatens, this game could have gotten out of hand very quickly. Instead it took a few minutes. Once Burke got in foul trouble and had to sit out, Michigan's offense became very stagnant, and Iowa finally started taking advantage of their opportunities around the time Josh Oglesby came in the game. He made a jumper off a curl, a three, and another tough jumper (arguably getting fouled on the last one). After that, things seemed to loosen up for Iowa. Gatens made a three, Marble got a three-point play on a layup off a sweet pass by Basabe in the post, and suddenly the lead was 10. The second half wound up being a holding maneuver, as Michigan would make an occasional three to draw a little under 10, Gatens would match it with a three of his own (including one off of a very nice hustle play by McCabe that broke up a Michigan fast break), and eventually time just ran out for the Wolverines.

Gatens clearly deserves man of the match honors, both for his offensive performance and for his defensive work on Hardaway. Gatens stuck to Hardaway all game and managed to grab three steals while anticipating the pass to him. And on offense, this was probably his best game of the year. Certainly his most efficient: despite a few early misses, he finished with an eFG% of 70% and a true shooting percentage of 77.9% (for comparison, the NCAA leaders in those categories are at 77.4% and 76.2%, respectively). One sign that Michigan may not have been operating at peak energy was that Gatens got open again and again from the perimeter. Usually that is the first things teams make sure to deny when they play Iowa, but Michigan looked very, very tired. It's easy to forget with Gatens that he has been the primary focus of opposing defenses for probably the last three years, and that has made it much harder for him to get the kind of open looks other sharp-shooters take for granted.

As a whole, the Iowa defense looked much more focused and together than they did against Michigan State. Players rotated more quickly and more intelligently, and the energy level was much higher. It helped that the offense wasn't giving up turnovers every other possession. But again, Michigan looked like they had very little energy in this game. There was not much movement on their offense, they conceded defensive rebounds without much protest, and their center, Jordan Morgan, was invisible for much of the game. The effort was great on Iowa's end, but it was also clear that something was off for Michigan. Whether it was fatigue from their overtime game with Northwestern or simple lack of preparation, I don't know, but Iowa took advantage of it by forcing contested shots, keeping Michigan out of the paint, and winning the battle on the defensive glass.

It's probably an oversimplification, but it seems like Iowa's defense determines the outcomes of their games. Their offense is always more or less okay -- sometimes a little better if they get to the line a lot, sometimes a little worse if their turnovers are bad -- but the defense is the aspect of their game that can swing from great to godawful. As long as they play the kind of disciplined, energetic D that they did against Michigan, they should have a chance to win any game in the nonsensical Big 10.

An extended note on Basabe and Iowa's post game

Basabe had an interesting game. The coaches must have worked with him on passing out of the post, because he made a conscious effort to look for cutters under the rim when he was double-teamed. This is a wonderful development for Melsahn, who has too often looked totally flustered when confronted with swarming defenders. If he can master the art of passing in the post, teams will be much more wary of doubling him in the future, which will help him score, which will make teams want to double him more, which will lead to more possibilities to pass, etc. His game wasn't all positive, though: he also had an unfortunate sequence where he made a pretty basic mistake on three consecutive possessions (failing to chase down a defensive rebound, traveling, and touching a ball unnecessarily as it fell out of bounds). He was benched shortly after that sequence and Devon Archie came in and gave a few good minutes.

I don't know if anyone else had this reaction, but whenever Archie comes in, the Iowa defense seems much more intimidating. Basabe is an okay defender and protects the rim to a certain degree, but Archie is taller, longer and is a better jumper. He has a much wider sphere of influence than any other Iowa defender. So why doesn't he play more? The answer must be that his offensive game is just not good enough right now. When Fran subs for Basabe, especially in critical portions of the game, he usually doesn't go for defensive players like Brommer or Archie, but offensive players like McCabe and White. And that also explains why Basabe is still the starter: he's the only Iowa post player who combines a semi-competent defensive game with a semi-competent offensive game. Michigan actually paid attention to Basabe and sent double teams at him when he got the ball in the post -- that would not happen for Brommer or Archie. When Basabe becomes a liability on offense, however -- when he turns the ball over -- he is quickly yanked from the game. Iowa has such limited outside shooting that teams already have learned to pack the paint against them. If you add in a player who is not a threat to shoot at all, Iowa becomes very easy to defend. That is, I think, why Fran goes to a small ball line-up with McCabe and White in the post rather than a more defensive line-up with Archie. That's a sensible strategy, but it would be fun to see if Iowa could find a way to incorporate Archie into the offense, because he really changes the look of the defense when he is in the game.

If Basabe could become a clear plus on offense rather than an intermittent plus, there would be no debate over who should be in at power forward/center. He has the most offensive potential of Iowa's post options, his defense is acceptable, and he rebounds well. But he really has struggled whenever he gets the ball one-on-one and is forced to make a move. His biggest problem is that he gets called for traveling a lot. And I think I've figured out one reason why: his footwork is very strange. Basabe is right-handed, which suggests that he would start his post up moves with his left foot as his pivot foot. But he frequently starts post moves with his right foot planted. Here's an example from the Michigan game. Here's Basabe establishing the right pivot foot (you'll have to trust me that he planted the right foot first): 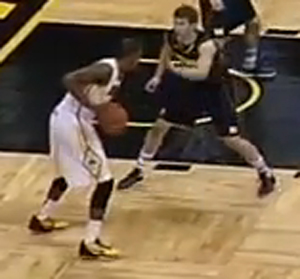 And here is him taking his first step: 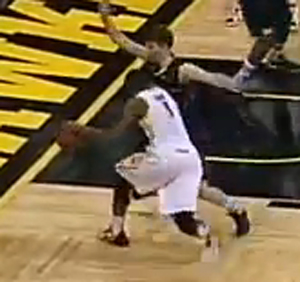 He was called for a travel on this play, even though it's not clear on the video that he actually did travel. What happened was that he established his right foot as his pivot foot, then planted his left foot as well, then took his first step with his left foot. He never gave up his right foot as the pivot foot, so this should be a legal move. Even though it probably wasn't a travel, just watching it, it looked like a travel, because it looked very weird. You don't expect a right-handed player to start with his right foot as the pivot foot. And it seems likely the ref assumed the same thing on this play. So what can Basabe do about it? One option would be to establish his pivot foot more prominently so that the ref could not be mistaken about which foot it is. Another would be to just pivot off his left foot like every other right-handed person in the world. I'm not sure why pivoting off the opposite foot feels so much more comfortable for most people, but it does. It's as if giving your off foot the easy role of just not moving allows your dominant foot to do more high-level foot-type activities, like jab-stepping, taking a decisive first step, and planting to take a shot. Forcing your off foot to do all those difficult things seems very awkward (try imagining it in your head -- don't you feel like you just traveled?). If Basabe could get his footwork figured out, he could eliminate some of these bogus (and non-bogus) travel calls, and operate more economically in the post.