Some of you might remember our spat in early November with local radio station KCJJ, when their morning host (the exquisitely named Captain Steve) and their sports director (Suterman) took offense to me calling them ill-informed. They voiced their displeasure by calling us "wannabe hack journalists" and bragging about the size of the houses they had purchased with all that AM radio lucre. We parodied morning AM radio, and they summarily dismissed us as a puppy nipping at their well-informed heels.

This morning, I opened up the Rivals message board to check in on whether Marcus Coker had, as previously reported on that board, framed Roger Rabbit and/or kidnapped the Lindbergh baby. Given our continued status as a small satellite orbiting KCJJ's world, I was shocked to find this thread:

Let me zoom in a little closer, so you can see why I was so stunned: 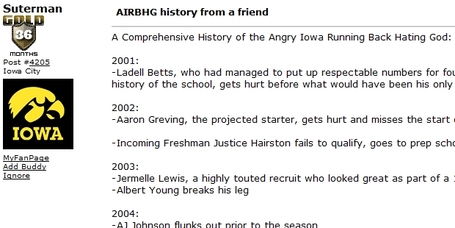 That is a comprehensive history of the acts of the Angry Iowa Running Back Hating God (or AIRBHG, as he is know colloquially), written by "Suterman", a/k/a KCJJ sports director Tom Suter. As we all know (and as was pointed out later in the thread), Angry Iowa Running Back Hating God is a creation of the dastardly wannabe hack journalists at this very site. When he's asked later where AIRBHG originated, Suterman begs off: 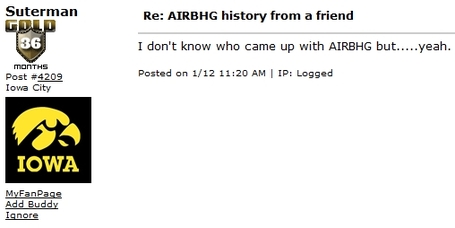 Look, AIRBHG isn't only our thing (in fact, I'm pretty sure it first appeared in a post at mGoBlog, because it sounds like something Brian would write), and we have no problem with other people in other forums using it. We'd just like to convey to Suterman and the rest of those crack journalists in the KCJJ action sports team the lesson we learned on the first day of Wannabe Hack Journalist class: It's not plagiarism if you link to it.