[Editor's note: The following is an excerpt from the upcoming January edition of our sister publication, Sitting Pretty, a monthly journal devoted to chairs, chair-making, and the sitting arts.]

"That was a pretty heavy chair, too... It's kind of impressive for him to throw it down with that force." - Matt Gatens

SP: We are sitting down today, no pun intended, with University of Iowa head basketball coach Francis McCaffery, who has a long and interesting history with chairs. How do you like the chair we've given you today, Mr. McCaffery?

SP: Great. Now, can you tell us about your first chair?

FM: Well, there are obviously a lot of chairs in my past. But the one that really sticks out in my memory is the chair/desk combination I had in first grade. 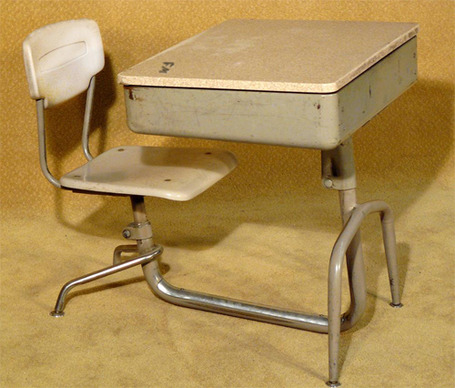 SP: What can you tell us about that chair? It looks pretty uncomfortable, frankly.

FM: Oh it was. Plastic and metal, weighed probably 50 pounds. Good for hiding comic books and baseball cards, but not much else. And you know how hard it is to be cooped up at that age, especially in an uncomfortable chair.

SP: Why is it so memorable for you?

FM: Well, it just so happened that my desk looked out a window onto the basketball courts. Basketball was my first love, even then. So one day, we were learning all about vowels and I was bored, and that chair was just really chafing me, you know? So I threw it out the window and went and shot baskets.

SP: An impressive show of strength for a -- what, six-year old?

FM: I suppose so.

SP: What's next in your chair pantheon?

FM: Let me tell you about this futon I had in college. It was the lumpiest, most uncomf--

SP: I'm sorry, a futon is not a chair. Certainly not. Why the thought is absurd.

FM: Okay, but there's a great story behind that. I threw it so far my roommates couldn't belie-

SP: Please, move on. You are upsetting me. A futon. My stars.

FM: Okay, well, the next chair I remember was this chaise longue we bought from this crazy family. Does that count as a chair? 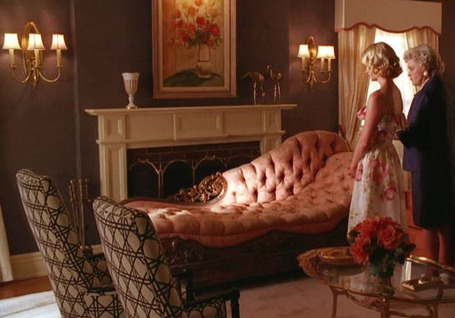 FM: This was when I was an assistant coach at Notre Dame. And my wife and I were moving into this walk-up apartment on the fifth floor, but we couldn't afford movers. I had to throw that crazy thing up four flights of stairs on consecutive throws. Didn't sit in it much, though.

FM: Later in the '90s, I did what everybody does who is trying to save a few bucks -- I went to IKEA. And I thought I had found a great easy chair for the den: a light green Karlstad chair. After four hours of sweating and trying to assemble the damn thing with this puny little Allen wrench, I gave up. 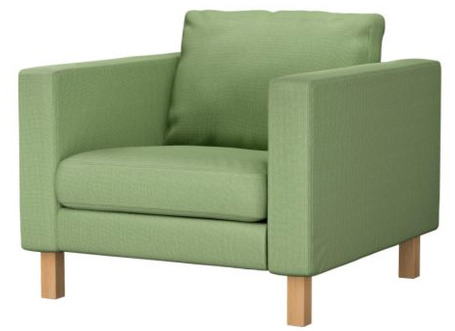 FM: No, of course not. What, do you think I'm some kind of chair-throwing maniac? I have a wide variety of reactions to chai -- Okay, you got me. I said something along the lines of: "The chair costs $100 but they don't mention that it takes four hours of back-breaking labor to assemble, those shifty goddamn Swedes!" Then I skipped every particle-board piece across a nearby pond. Very satisfying.

SP: Which brings us to East Lansing.

FM: Do we have to talk about that?

SP: It's what our readers want to know.

FM: Okay. It's all a big misunderstanding, actually. 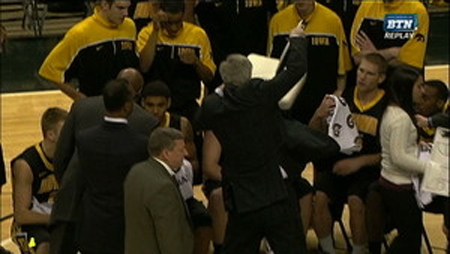 SP: I understand you were upset about the refereeing and the way your players were reacting?

FM: No, not at all. It was like this: most arenas use Anthem-brand bench chairs, and they are very well-built, comfortable chairs.

FM: Yeah, they're great, right? But the Breslin Center uses these cut-rate CoachCo-brand chairs. They're uncomfortable, the back support is all weird, and the one I had that night must have had a spring loose, because I could feel something poking me right in the shoulder blades.

FM: Exactly. So after about an hour and a half of that, I had had enough, and I let that chair know what I thought of it.

SP: So when you told the press: "Nobody knows what we're discussing during that timeout except for me and the players," you meant that you were talking about the chair?

FM: Yeah, basically. I probably should have talked about the game a little more.

SP: I did notice in the video, the players didn't seem nearly as excited as you were.

FM: They just don't share the same passion I have about chairs. We're a rare breed, we chairopodists. I love -- just love -- a good chair, and a poorly made or uncomfortable one makes me just... so... ANGRY.

SP: You are similar to Robert Knight in that way. [Editor's note: For a related story, see the February 1985 issue of SP for our interview of Mr. Knight.] Is it common for arenas to cut corners like that?

FM: A similar thing happened at Northern Iowa, actually. The McLeod Center uses CoachCo chairs, and I guess I just have a certain amount of time that I can sit in a bad chair, because at about the same point in the game, I got pretty upset.They had a nice police officer escort me off the court.

SP: That's unfortunate. Why do you think these arenas resort to such ill-made chairs?

FM: Well, I don't want to get in any more trouble, but I think there may be a little gamesmanship involved. I noticed that [Michigan State coach Tom] Izzo's chair was an Anthem-brand chair, as were all his players' chairs.

SP: Have you considered pulling a similar maneuver?

FM: Never. I have too much respect for the chair-makers art.

SP: Have you ever considered using a beaded seat cover to improve these chairs?

FM: I would, but it's an NCAA violation, apparently.

SP: Well, good luck with the season, and don't let bad chairs get you down. When it comes to bad chairs, my motto is "I don't give a sit!"

FM: That's not funny. That's awful. There's only one thing that makes me more angry than bad chairs, and that's bad puns.

SP: Oh, well this is awkward. I thought we could end this interview on a humorous, light note. Now how will we --

[Fran throws editor of Sitting Pretty magazine out window. Storms out of room.]