Share All sharing options for: Iowa running back troubles traced to faulty locker 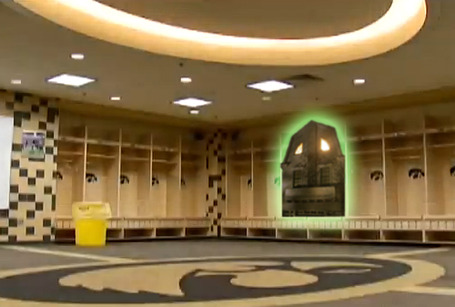 In a press release, University of Iowa officials announced today that they have discovered what they believe to be the source of Iowa's recent attrition problems at running back. "After a careful examination of the circumstances of the thirteen separate departures from the team, we noticed a common thread linking all of the players in question: locker 1408." The locker, which is distinguished from the other lockers by its double-wide space, Dutch Colonial design, and eerie green glow, has been given to Iowa running backs dating back to its mysterious appearance in the locker room circa 2007. "The locker was given to starting running backs and sometimes back-ups as an honor for their hard work and critical place on the team," the press release went on to note. "We now have reason to believe, however, that this locker was possessed by some sort of ancient curse."

The nature of the curse is disputed, but at least one expert believes it is related to a game tape of the 1986 Rose Bowl that was recently excavated from beneath the locker. "That was Ronnie Harmon's four fumble game, you may remember," said University of Iowa professor of Spooky Anthropology, Steven Blum. "And those fumbles were believed to be caused by a hex cast by UCLA coach Terry Donahue, who was a 12th-level shaman, and ... wait, just to clarify, I'm Steven with a 'v' and Blum with a 'u', okay? You do have that down correctly? Anyway, as I was saying, that tape carried with it what we in the academic community call 'very bad mojo', and it presumably called forth into existence the unusual locker."

The Iowa press release cited a "lack of oversight" as the as the reason the locker was allowed to remain in the locker room for such a long period of time. Recently-retired defensive coordinator Norm Parker explained in a phone interview: "Well, I thought Ken had built the damn thing, and he's so sensitive about the crap he makes in his 'wood shop', so I didn't want to hurt his feelings by saying it looked weird, or that blood was running down the walls or what have you. And Ken thought Kirk had built it, and Kirk thought Ken had built it, and you can see how it was... We were all walking on egg shells with each other for a good month after that thing showed up."

Visitors to the locker room have frequently noted wailing sounds emanating from the locker, strange dogs lurking in its vicinity, and sudden twinges of pain in their medial and anterior cruciate ligaments when walking past the locker. The press release commented obliquely on these phenomena: "In retrospect, the warning signs surrounding the locker were clear, and it is truly unfortunate that Adam Robinson and Brandon Wegher were chosen to share the locker in question last fall."

This announcement flies in the face of long-standing claims by head coach Kirk Ferentz that that "curses don't exist." When reached for comment, Ferentz expressed contrition. "I used to think: 'I ain't 'fraid of no ghost,' but I was wrong. I am 'fraid of some ghost, specifically the ghost in the locker room. Or is it a demon? I'm not clear. In any case, I would like to apologize for busting on all of you in the media so hard when you brought up these concerns in the past. The sarcasm, the snorting, it was inappropriate. What can I say? Bustin' made me feel good."

Per Ferentz's orders, the Harmon tape was destroyed late Wednesday, and since that time, the glowing and wailing surrounding the locker have both diminished. As a precautionary measure, and because the team no longer employs running backs, the locker has been reassigned to the team's place kickers. Sophomore kicker Mike Meyer and junior kicker Trent Mossbrucker will take possession of the locker as soon as they return from their suspensions, which were handed down early Thursday morning for unspecified "violation of team rules."

UPDATE: The Press-Citizen has obtained a report via open records law request indicating that Mossbrucker is under investigation by the SEC for running a pyramid scheme that, per the federal complaint, "substantially contributed to the financial meltdown of Lehman Brothers in fall of 2008." Meanwhile, Meyer has been identified as the long-term stalker of actress and Activia spokeswoman Jamie Lee Curtis.