Share All sharing options for: Marcus Coker, Iowa Football and Running Back Attrition

In 2007, Iowa fielded two senior halfbacks in tandem: The always-reliable Albert Young, a fifth year senior who joined the team in 2003, and the quicker, smaller Damian Sims, a fourth-year senior who was recruited in 2004. There had been a time earlier in Young's career where he looked like a future Heisman winner -- as a sophomore, he had been a Doak Walker finalist -- but injuries derailed his career. Sims had shuttled briefly between the defensive backfield and halfback positions before settling in as Young's change of pace back. Their senior season was a mess, as the offensive line went through a full rebuild for the first time in eight years, the best skill position players were all thrown off the team in August camp, and Jake Christensen descended into madness (I sort of joined him by the end).

Little did we know that, when Young and Sims graduated the following May, they would be the last Iowa tailbacks to play four or more years in nearly a decade. Since their departure, Iowa has recruited sixteen tailbacks. Of those sixteen, three remain on the squad. Before yesterday, twelve left before their four years was up, the vast majority within two. Yesterday's announcement that Marcus Coker, the Big Ten's second leading rusher and an astrophysics major to boot, had requested a release from his scholarship made him the thirteenth to jump ship.

Damian Sims was the last recruited Iowa halfback to make it through four years. He signed a letter of intent on National Signing Day, 2004. He is our starting point.

Shonn Greene was also a part of this class. He did not qualify and spent the year at the Milford Academy, where he was neither seen nor heard.

TOTAL DEFECTIONS SINCE DAMIAN SIMS: ONE

Shonn Greene was back! After his year at Milford, Greene was eligible and joined Iowa. He made his debut with 118 yards on 16 carries against Ball State in the 2005 opener, but was used only sparingly the rest of the way. As a sophomore, Greene ran 32 times for 205 yards before missing the second half of the season with an injury. His grades went in the toilet again, and by 2006 he was moving furniture and attending Kirkwood Community College, which doesn't even have a football team. We'll get back to him later.

Kalvin Bailey was the first big-shot halfback recruit to get annihilated by the Iowa program. In retrospect, it's stunning we landed him. Bailey was a four-star recruit out of Florida with offers from FSU and Miami, among others, but was also committing at the height of Kirk Ferentz's power, as part of the vaunted 2005 recruiting class. He was a beast of a halfback, coming in at 5'11" and 245 lbs. He redshirted as a freshman, missed on his grades, went to North Iowa Community College to get back on track, and eventually played at two other community colleges before returning to Tampa and working at a hospital.

Corey Robertson was more of a prototypical Iowa halfback recruit. At 6'1", 205, he wasn't ideal size and only got three stars as a result. He was, however, the Texas 4A MVP as a senior, offensive player of the year as a junior, and best in his class as a sophomore, so it's not like he fell off a turnip truck in Tiffin. He redshirted, moved to defensive back during spring practice in 2006, then failed out in spring semester. He also went to North Iowa Community College, and was never heard from again. Probably has something to do with the fact that it's Mason City, where Stephen Bloom says people go to disappear.

Dana Brown had less going for him when he got to Iowa City than the others on this list: Only two stars, an offer list that never escaped the MAC/Sun Belt, no hype at all. Brown did something his more hyped backfield-mates could not: He made it to his sophomore year. He didn't make it through, though: In October, he was dismissed for a violation of team policies. It was later discovered that he'd beaten up his girlfriend.

There was only one halfback recruit in 2006: Anthony Bowman. 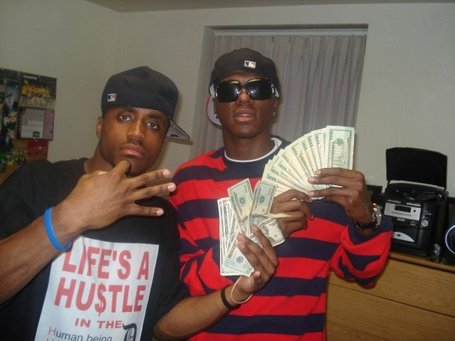 That's Bowman, on the left, in August 2007 in a picture that was found on his Facebook account after he'd been arrested for credit card fraud. The story writes itself.

Again, there was only one halfback recruit in 2007, and Jevon Pugh (Naples, FL) again wasn't here long. A three-star commit with offers from Kansas State, Maryland, and a host of other mid-level programs, Pugh played as a true freshman. That is, until he was implicated in the Cedric Everson matter, suspended indefinitely, and uncerimoniously hung out to dry by the coaching staff while the Des Moines Register all but convicted him. He quietly quit the team in January, after just one semester on campus, despite the fact that nobody had ever implicated him in anything wrong (subsequent reports indicate he'd talked to the victim the night of the Everson thing. That's it. A brief conversation).

With quite literally no scholarship halfbacks on the roster in February 2008, Iowa took all comers, signing five scholarship halfbacks and taking in a sixth. The most promising, at least initially, was JUCO transfer Nate Guillory. A scatback from Coffeyville (KS) Community College, Guillory had given verbal commitments to at least three schools in the fall of 2007 before signing on with Iowa following the Pugh suspension because opportunities were ample. He left of his own volition after about a week, probably because...

Shonn Greene was back again! The furniture moving and TV watching had worked, too, because Shonn went out and won the Doak Walker Award as a 23-year-old junior. He then gave Iowa fans chanting "ONE MORE YEAR" the most STFU look in the history of STFU looks and was never seen again, leaving early for the Draft within seconds of the end of a dominant Outback Bowl victory over South Carolina.

Iowa also added four freshmen to the mix, most notably Florida garage sale find Jeff Brinson. The video on Brinson was wonderful, mostly because he played in a Wing T offense in high school, so it was just pulling guards and Soviet-style deception. That was all we really saw of Brinson, though. Even with the dearth of halfbacks, Brinson redshirted. He rushed once for seven yards as a redshirt freshman, but never fully recovered from ankle injuries suffered in August camp. Then, before the 2009 season, he hurt his foot and never got back to the field. In the winter of 2010, Brinson transferred to Central Florida; by August 2011, he'd tore his ACL and quit football altogether. One carry, seven yards.

Jewel Hampton ended up being Greene's backup in 2008, almost by default. He was, however, extremely effective, and when Greene left early for the pros, an inordinate number of fans put their faith in Hampton to pick up where the Greene Monster had left off. So, as if on cue, Hampton tore his ACL in late August 2009 and missed the season. He then got in a bar fight over the summer and missed some further time. When he returned, he was in a three-man backfield that...well, we'll get to that later. Suffice it to say, he never regained the starting job in any meaningful way. In December 2010, after a tumultuous three seasons in Iowa City, Hampton trasferred to I-AA Southern Illinois, where he was conference newcomer of the year.

Which brings us to the saga of Adam Robinson. A walk-on initially and widely considered a beneficiary of the recruitment of his friend Jordan Bernstine, Robinson was given one of the last scholarships in the 2008 class when a last-second decommit left Iowa flush. He redshirted a year, then appeared without warning as the thunder to Brandon Wegher's flash in the wake of Hampton's injury. By 2010, Hampton was in the doghouse, Wegher was nowhere to be found, and Robinson was earning plaudits from the coaches. So, of course, it imploded almost immediately. Robinson missed some time with concussions, his grades went south (what Ferentz called "academic indigestion" in what we had unsuccessfully hoped would be the last digestive joke of his career), he was suspended twice in November, then while on suspension during Iowa's bowl preparation, was picked up with a bag of weed. He was summarily sacked soon after.

Brandon Wegher was the be-all, end-all of 2009. His legend in western Iowa football was bordering on myth, his star as bright as any Iowa high school skill position player in a generation. He shunned Nebraska and Oklahoma to be a Hawkeye, and played immediately once Hampton was finished. It was as good as could be expected from an Iowa back. He then abruptly quit the team in August 2010, after approximately one half of one practice, for personal reasons. Eventually, it was announced he was not returning. He tried to walk on at Oklahoma, left after two days, enrolled at Iowa Western Community College in Council Bluffs, somehow failed out, and was arrested last year for public intox, eluding arrest, and looking like Jeremy Piven had he been in Fast Times at Ridgemont High: 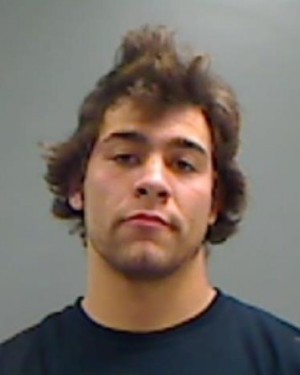 Marcus Coker is now gone. Why, we don't really know, but this Iowa City Press-Citizen report might have something to do with it. More details to come.

That's fourteen defections by twelve players in seven classes of recruits, and that list doesn't even include Class of 2011 defector Mika'il McCall or Rodney Coe, who failed to qualify. Coker's class still includes DeAndre Johnson; should he leave, that would make it seventeen consecutive defections from fifteen consecutive players. Of the players listed, Willie Lowe lasted longer than any other, and he didn't even play halfback. As for those that actually stayed at the position, none even made it past the January following their third season (Robinson, who was dismissed from the team as a redshirt sophomore in the week after Iowa's bowl game, served the longest term). This is no longer funny. This is a plague, and it has no rhyme or reason beyond its indiscriminate effect on running backs.