Share All sharing options for: Digging deep into the wrestling tiebreaker rule

Well it's four days later. Still mad that the Iowa wrestling team lost its unbeaten streak due to a freaking tiebreaker? Yeah, me too.

So for a little closure, I decided to check out the NCAA rules concerning wrestling's new tiebreaker rules.

Here's what I found:

When two teams finish in a tie in a dual meet or a team-advancement tournament, the following criteria shall be applied to determine a winner:

Both teams won five matches. Next!

There were no falls or technical falls. Next!

Now this is where Oklahoma State had the advantage, 54-51, but let's say that match points were even too. Let's go to criterion four.

Damn, the first takedown belonged to the mad Russian Alan Gelogaev, so the Hawks are screwed again. What happens, though, if there are no takedowns by either team (which is probably a scenario equivalent to hell for Hawkeye fans)? 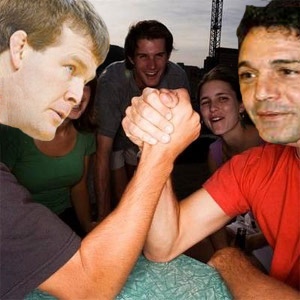 A pretty big jumping off point from first takedown, but I like our chances in this criterion, unless Smith can find a way to stall during a arm wrestling match too. And if that happens well...

Once again advantage Iowa. Telford may be small for a heavyweight, but he's perfect for a dizzy bat race. Next!

Hubris thy name is the NCAA. By the way, this one ends in a tie. Six wrestlers apiece 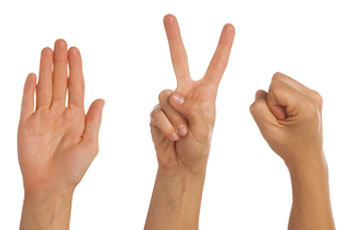 You've got to be kidding me.

That's the last one. And you know what? That's all we need. Oklahoma State can have the match points criterion, we've got Gable.