IOWA CITY, IOWA - The University of Iowa announced today that sophomore running back Marcus Coker has withdrawn his application to enroll in spring semester classes. Coker also asked for a release from his football scholarship and that request has been granted.

I think there is only one possible reaction to this news: 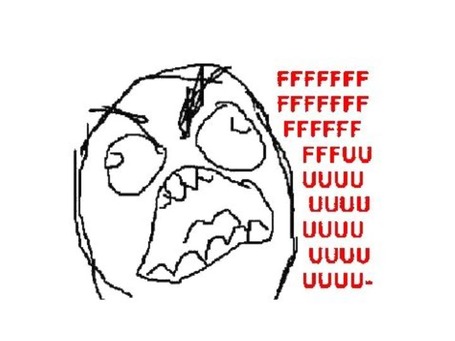 This is so far beyond ridiculous it's... I don't even know what it is at this point. "Absurd" and "farcical" seem inadequate. Even made-up words like "ricockulous" somehow fail to capture the sheer nonsensical insanity of the Iowa running back situation. We're beyond curses, vengeful deities, and comparisons to the Spinal Tap drummer situation. We're in a brand new plane of madness here. And it sucks.

I do not know what Marcus Coker did to get suspended, nor why he now asked for his release from Iowa. There has been (and likely will continue to be) considerable speculation, but out of respect for Coker, who was nothing but a considerate and well-spoken representative for the football team and the university while he was here and whose suspension (by all indications) had nothing to do with any criminal activities, I would prefer that you not disparage his character and that you use discretion in discussing the speculation surrounding his suspension and departure.

According to an Iowa City Police Department incident report from Oct. 28, 2011, a woman reported to police that she was the victim of an assault at Coker’s residence, 618 Iowa Ave. The alleged assault took place sometime between 1:15-1:30 p.m. on Oct. 28.

The report isn’t detailed, but does note the responding officer was dispatched to the University of Iowa Hospitals and Clinics for a sexual assault.

Coker was never charged and the investigation has concluded without charges.

"Welp so much for that. It was a good 2 years iowa..best 2 I could of asked for. Thanks again for the support. I really wish I could tell u guys wats goin on cuz its really ridiculous to b punished for somethin I didnt do. Id like to think [thank] the coaches and athletic staff for everything. Hawk for life."

I give up. I'm going to go stare at pictures of puppies for a while, okay? Okay.

And, yes, I was wrong. I freely admit that. I thought Coker would be back. McCall's departure was sad, but not terribly surprising. Coker's departure, on the other hand, is surprising (except in the "it's not because he's an Iowa running back so of course you should expect the worst' way) because what little we knew about his suspension made it sound as though it wasn't a major deal. Both Ferentz and Barta seemed optimistic that he would be able to return to the team in 2013 2012. Various insiders and Iowa media types expressed the same sentiment. So to see this news today... it was unexpected. Very unexpected.

Meanwhile, for probably the ∞th straight year, Iowa's leading rusher will not be returning for the following season. Welcome to the new reality, same as the old reality.