Share All sharing options for: Happy New Year From BHGP 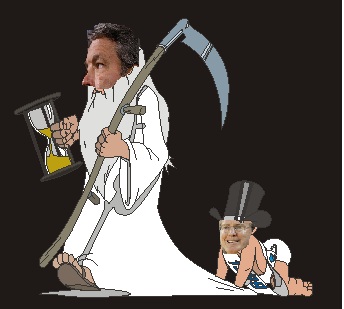 2011 was not exactly a banner year for Iowa sports, though some suffered more than others. The football program began the year with the ugly specter of the rhabdomyolysis scandal hanging over it, as thirteen players were hospitalized for a terrible reaction to an off-season workout. The incident -- and the athletic department's ham-handed handling of it -- led to thousands of jokes and quips and dozens (if not hundreds) of columns and posts excoriating Ferentz, Barta, the coaches, and the administration for the incident and the way they handled it publicly. (As it turned out, this was merely the tip of the iceberg when it came to the staggering amount of scandals and bad publicity that fell upon college football in general in 2011.)

The football program ended the year with a dispiriting loss to Oklahoma in the Insight Bowl that featured several of the hallmarks of Iowa losses in recent years: an ineffectual offense, a defense that wears down, and a staff that struggles to turn a game around when things are going badly. In-between the football team went 7-5, lost to a bad Minnesota team for the second straight year, lost to Iowa State and Nebraska, and finished in the middle of the pack in the Big Ten's new Leaders division. The only rival Iowa beat was, of course, Our Most Hated Rival. And when one of your season highlights is beating a 6-6 Northwestern team... well, it's safe to say it hasn't been a great year. To say nothing of the off-field issues that gobbled up still more players and the ongoing predations of AIRBHG.

Unfortunately, the football team was far from the only Iowa team that endured a disappointing 2011 campaign. The basketball team began the year by losing a heartbreaker at home to Ohio State, went on to lose 12 of their remaining 16 league games and suffered a first round exit in the Big Ten Tournament for the fifth straight year on their way to an 11-20 season, their fourth straight losing season, one of the longest sustained runs of futility in the history of Iowa basketball. On the bright side, they ended the year with an unlikely and exhilarating 72-65 win over #11 Wisconsin in the Kohl Center (where no road teams win), had a thoroughly satisfying 72-52 beatdown of Michigan State last year, knocked off #6 Purdue in last year's regular season finale, and Fran beat Roy Williams and North Carolina for a coveted recruit on his way to assembling what appears to be a gangbusters recruiting class. We might not be able to "get mad" yet this spring, but at least there's hope in the air as we endure more losses.

Nor was the mighty wrestling team spared disappointment in 2011. After winning three consecutive Big Ten and NCAA championships, they came up short in their quest for fourpeats in 2011: they lost the Big Tens to Penn State by a single point and finished third (behind Penn State and Cornell) at the NCAAs. Even the team's 2011 highlight -- maintaining the incredible dual meet streak without a loss -- was tainted somewhat by a draw with Oklahoma State last January, as it turned the winning streak into an "unbeaten" streak instead. Even the women were not immune to the disappointment bug: the women's basketball team made the NCAA tournament (yay!) but got bounced in the first round (boo!) and there were no stirring NCAA Tournament runs by the soccer, softball, or field hockey teams, either. It was, all told, an eminently forgettable year for Hawkeye sports.

Even if it was a down year for Iowa, it was still a pretty good year at BHGP. While circumstances reduced the contributions we got from Adam, Hayden Fry's Mustache Ride, and StoopsMyAss, we got peerless contributions from Horace and excellent aid in the news and humor departments from our newest contributors, PSD and hawk6894. I don't know what 2012 will bring (hopefully more Iowa wins in all sports, since writing about winning teams is a hell of a lot more fun than writing about losing teams; better for page views, too), but BHGP will do our best to cover it all with the same level of insight, irreverence, and downright insanity that's become our trademark.