If you're reading this blog, you probably already know that the Iowa-Iowa State football rivalry lay dormant for over 40 years in the middle of the 20th century, owing to plenty of bad blood on both sides.  But eventually time passed and cooler heads prevailed and the series was resumed in 1977.  To mark the occasion, Iowa State whipped up some special uniforms, which is a big reason the game is fondly remembered around these parts.  After all, they inspired this classic image: 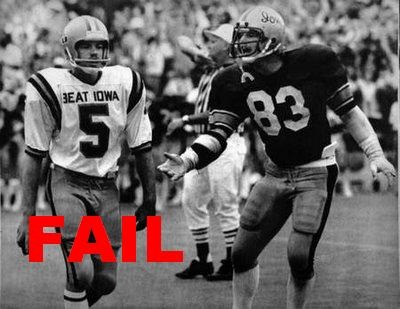 But thanks to the impressive efforts of The Hawkeye Historian, we have more than just a few images and game write-ups to remember that game by: we have actual video footage.

* #19 Iowa State.  Yes, really.  Iowa State was ranked and Iowa was not (well, the second part of that sentence isn't so strange; the late '70s were not kind to Iowa football) at the time they played.  In case you were wondering, yes, this was the very last time that has ever happened.

* Everything was just a little... off.  The uniforms weren't radically dissimilar to what Iowa wears now (aside from the gold "script Iowa" helmet, which is a pretty radical departure from our current black and gold tigerhawk lid).  The sleeves were a little (OK, a lot) longer and the stripes on the pants were a little narrower.  (On the other hand, just try imagining Paul Rhoads rocking a gold shirt and red polyester pants on the sidelines like Earle Bruce was in these highlights.)

But the other elements of the gameday experience were a pretty far cry from what we've grown accustomed to now. Just look at the awful astroturf, which looks like a thin layer of green paint over concrete (actually...).  Or the field itself, which has endzones barren of any design elements, but a modestly-sized "I" in the middle of the field. Things look a little different today.  But by far the biggest change was the individual player introductions (although a few seem to be missing on that video), which are an interesting touch.  Anyone know if that was that unique to this game or was it something they did often back in the day?  The best one?  Mike Brady!  He was even from California.

* Special teams was an issue back then, too.  As evidenced by that punt Iowa State returned for a touchdown (1:15), some things never change.  In fact, it was a triple whammy for Iowa in the special teams department: not only did they give up that punt return touchdown (the only touchdown Iowa conceded, in fact), but they missed an extra point on their first touchdown (more on that in a moment), which then caused them to chase those points and go for two after the second touchdown (they failed to convert).

* Holy shit, Dennis Mosley!  Speaking of that first Iowa touchdown (2:20)... it was a thing of beauty.  Mosley displayed great patience in bouncing the play outside and waiting for the hole to open and once he hit the open field it was all BANG ZOOM TO THE END ZONE, ALICE.  Mosley had a weird career at Iowa.  Despite runs like that, he wasn't Iowa's leading rusher in '77 or '78 (fullback Jon Lazar was -- no, really, a fullback).  But when Hayden Fry arrived in '79, Mosley had a breakout season.  He became the first Iowa running back to crack 1000 yards in a season, scooting for 1267 yards and setting a single-season record that would stand for 16 years.  His breathtaking run in the '77 game may not have even been his greatest highlight against ISU: he destroyed them to the tune of 229 yards (another record at the time) in the '79 game, a 30-14 Iowa win.  No disrespect to Lazar, who was a hell of a running back by all accounts, but it remains a complete mystery to me why Mosley was so underutilized at Iowa until 1979.

* Defense: it's what for breakfast, lunch, and dinner.  The similarities between the Iowa defense in the video and the Iowa defense we've watched in recent years are downright uncanny.  Seriously, just watch them stringing plays out and swarming to the ball: if you squint a little, you'd swear Karl Klug and Pat Angerer had traveled back in time to bitchmake the Iowa State offense.  Or watch Iowa State try to run an option play (7:25) and tell me you don't get flashbacks of the 2010 Orange Bowl.  Old or new, it's a beautiful thing to watch.  Also, even back then Iowa State players liked giving the ball up to Iowa players (see 4:00 for one of many examples).  Why, Iowa State quarterbacks even liked throwing the ball to Iowa guys wearing #9 (9:00)... that pick was so spectacular it might have inspired a Dave "Motherfucking" Becker 'shop.  You know, if Photoshop had been around back then.  Or the interwebs.

* "Take a look at that honey."  File that one away under "Things You'll Never Hear On A Broadcast Today (Unless Ron Franklin Is In The Booth)."

* Football in the '70s, man.  Barefoot kickers!  Offensive and defensive linemen that looked like real people (albeit large real people), not hulking demigods from a comic book!  The T-formation!  What a strange and wonderful time that must have been.  (Unless you enjoyed seeing Iowa actually win football games, that is.  The '70s weren't so wonderful on that front.)