Because the only solid lesson of Iowa's game seemed to be "it's hard to play football in a monsoon," I decided to look at our opponent for next week instead.  This meant, unfortunately, watching Iowa State football when I didn't have to.  I stopped at just the first half of Iowa State's 20-19 victory over Northern Iowa, both for time reasons and a growing sense of seasickness and spiritual disquiet, but that was enough to get a sense of what ISU is about on offense:

To read this, remember that the numbers represent yardage on individual plays and the color-coded numbers represent averages and totals for the specific types of plays in question.  I've added additional color-coding for Iowa State's spread option runs, which is discussed further down.

First, a little background.  Iowa State runs their offense almost exclusively out of a shotgun or pistol (i.e., the QB lines up like he does in the shotgun, but not as far back, with one running back behind the QB) set, usually with three or four wide-receivers: 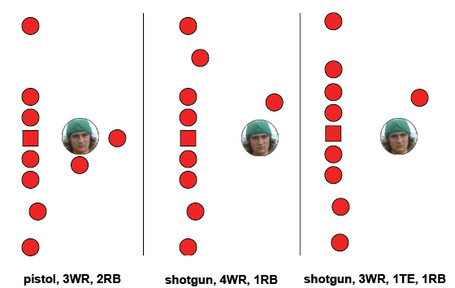 That's Jeff Spicoli ... err, Steele Jantz at QB, of course (I just wanted to recall the awesome photo from this post).  The Cyclones will present the Hawks with yet another variant on the spread offense.*  I'm no connoisseur of all the spread varietals, but ISU's seems to be of the Vince-Young-at-Texas, Pat-White-at-WVU type, with lots of read option (or at least the appearance of read option).  That is, on many plays, both runs and passes, Jantz takes the shotgun snap, puts the ball in the running back's belly, and does one of three things: a) hands it off to the back on a draw, b) keeps it and runs it himself, or c) passes it.  My impression was that these are not true "reads"; the option looks like it's called beforehand, and Jantz just executes the play as called, but I could be wrong.  As the chart above shows, the spread option rarely involved Jantz keeping the ball (2 out of 11 times that play was run), so it seems less like a true option and more like a draw with some option-like physical business attached.  Note: one key difference between ISU and those other spread teams is that Steele Jantz is running the spread here, not Vince Young or Pat White.

* So add Iowa State to the list of opponents this year that run primarily spread: Tennessee Tech, Northwestern, Pitt, Minnesota -- I think this spread thing might be catching on!

The Cyclones usually have three true wide receivers on the field at any time, plus a tight end/H-back (#82 Reid Branderhorst) who lines up most of the time as a slot receiver (sort of like Missouri's "tight end" last year).  When there are two backs in, they usually run one of their true running backs along with a fullback.  Jantz is, needless to say, the crucial cog in the Iowa State machine.  He was the team's leading rusher on Saturday, with 85 yards on 20 carries, and passed for 187 yards on 18-40 passing (1 TD, 3INT).  He looks like a decent runner, not blazing, although he did bail out the offense more than a few times by scrambling on pass plays that broke down.  He also made the choice to actually pass the ball, however, which resulted in several balls thrown past open men or otherwise off-target, and a few very poor choices that led to interceptions (two of which were in the red zone).  The Cyclones seemed to be making things fairly simple for Jantz, running lots of sprint-out throws to the sideline or wide receiver screens (speedy wide-out #3 Aaron Horne was the main target there).  Unfortunately, the Cyclone offensive line seemed determined to make things not simple for Jantz, by allowing hordes of onrushing Panthers into the backfield on a regular basis.  The spread frequently leaves Jantz back there with minimal protection (four WR, one RB was the most popular set), and that allowed the Panthers to get to the QB fairly frequently.

The other noticeable thing about the Cyclone offense was its speed... no, that sounds wrong -- rapidity?  Quickness of getting plays in?  That's it. They usually only used 10-15 seconds of the play clock before snapping the ball (by the way, if you like hearing announcers say the phrase "jet tempo", you are in luck -- the guys on the ISU broadcast must have said it 100 times in the half I watched; also, "Case IH red zone").  That speed meant more plays and more drives -- in one half of football I charted 45 plays for Iowa State.  By comparison, Iowa ran 58 plays in the entire Insight Bowl last year.  I'm not sure what the upshot of that speed is -- it could fatigue our defensive line, I suppose, but the same could be said for their offensive line.  Ultimately, it means that the game will probably be a few drives longer, which could mean... who knows?  Hopefully more opportunities for Iowa to pummel Iowa State players.

I didn't look at Iowa State's defense, but the Cyclones were out-gained 385 to 328 and allowed Northern Iowa quarterback Tirrell Rennie to gain 127 yards on 18 carries, so presumably there will be opportunities for Iowa to run.  As far as defending the Cyclone offense goes, it looks like it will be another game of spread coverage for Iowa's linebackers and secondary, with the added twist of keeping one eye on a spread option running quarterback.  Unless Norm Parker undergoes some sort of philosophical conversion and begins blitzing on a regular basis, it will be up to the Iowa front four to create pressure and sort out when a running back has the ball and when the QB keeps it.  If they can keep the running game contained, Iowa State will be forced to pass the ball, and, if we can take the UNI game as evidence, that's when the fun should start.