Daniels. Binns. Have you seen Norm anywhere? Practice has been going on for 30 minutes.

All right everybody come in. We had a good game last week and we’re going to use this bye week to work on some things that need a little tweaking. Defense, we’re still a little soft on our coverage, special teams had a few breakdowns on kickoff coverage, but our kicking and punting well.

(Under his breath) That James Monroe is a lying piece of shit.

And on offense we…

You heard the man, let’s break it down. Hawks on three. One, two, three. HAWKS!!!

Godamnit, this again. Okay, offense follow Ken. And defense your with Norm. Hey, where is Norm?

I was wondering the same thing.

When I talked to him yesterday, he told me he was breaking down some film.

I’ll go check on him.

Okay. Then I’ll lead the defensive practice. Who’s ready to chase down some punts? 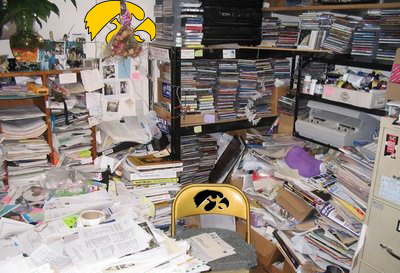 …here I was with both Osmonds in my bed. The guy, I think his name was Danny, he cried for a week-straight. It pretty much led to the cancellation of their television show and it got me a job at Illinois. Marie still calls me to this day. God, the 70s were great.

That was another great year. I was just promoted to defensive coordinator at Michigan State and how do you celebrate news like that? By traveling to West Germany of course, me and the Missus must have visited every bar in Berlin during a week of toe-curling debauchery. But every bar we go to, we hear about the bar of all bars in East Germany, so at 3 a.m. we decide to head over to this drinking hole and you know what’s in my way, some stupid ass wall. I yell over ‘Hey, I want to get hammered, what’s with the wall?" and some hippie with a Russian accent says the wall divides the West from the East. That’s the stupidest thing I’ve ever heard. So I grab a sledge hammer that my old lady carries around when we cruise the bars and I bash into that wall. And people began cheering me on and joining in. You might have seen it on the news.

You played a part in the tearing down of the Berlin wall?

Berlin Wall? Naw, I caused an international incident by drunkenly peeing on Gorbachev. That bar lived up to its reputation. Believe that.

There you guys are. Practice is underway what’s been going on?

Well Ferentz let me know that I was named Big Ten Defensive Player of the Week, so I wanted to come in and thank Norm for all the help.

Well, I guess that doesn’t sound so bad.

That was yesterday at 5. Norm has been showing me tapes from the 1980s and telling me stories. About the Osmonds and the Berlin Wall and slapping Mitt Romney in 1982.

Yeah, he says it’s all about his gameplan for Saturday.

James! Just the man I wanted to see. Here let me show you how we’re going to stop stupid West Coast Offense dead in its tracks.

Don’t get me started on Mr. Paterno and his Irishman quarterback. The last Dubliner to beat me was Jack Kennedy and I really hadn’t thought out my presidential campaign at that time. Here look at the board. 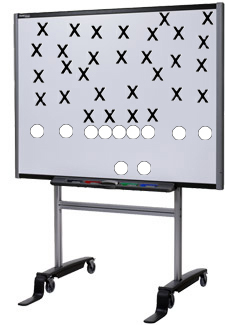 What we’re going to do, is four down linemen. Six linebackers and 20 defensive backs let’s see them try to throw the ball against that defense. Of course, all of the defensive backs will have a 10-yard cushion. See. Points at one X) That’s you James, you’ll wreak havoc all day.

I don’t want to be the bearer of bad news, but you can only have 11 players on defense.

Ahhh, but you’re wrong. I scoured everyone of my books and searched all the NCAA bylaws and guess what I found. You can have as many defensive players as you want, but only if you’re in Utah. So think how lucky we are. Lavell, you trick bastard, you thought you could fool me.

Yeah. One of the sneakiest SOBs west of the Continental Divide. I was on vacation down in Tiajuana in the late 60s. Eating tacos, riding donkeys, injesting pills of all sizes and flavors. It was heaven. I was in this small Mexican cantina and who do I see coming out? My good buddy Lavell. He tells me there’s a burger on the menu with my name on it: the Tiajuana Titty-Twister. So I order it, take a bite and it’s the hottest damn sandwich I ever ate. I finished it, though, and then I had another. The Mexican people thought I was a god the rest of the trip. Now, I’ll have my chance for revenge against Lavell. Here check out this putz’s offense.

Oh Jesus. Tom, he thinks were playing BYU this week instead of the bye.

You’ve got to be kidding me. I’ve been up 38 straight hours. We better go to practice, what’d I miss.

Well, Coach O’Keefe ran away before Coach Ferentz could criticize the offense. And Coach Ferentz is leading the defensive practice.

Umm... Norm, is that Steve Young in that video? I bet he’s a big bozo.

Yeah, what has he ever done?

Steve Young is actually a good guy. Now this is a long story. But in 1992, I was backpacking through northern California and decided to visit Alcatraz in San Francisco because it had been 30 years since my breakout and I’m in Alcatraz and the tour guide keeps giving bad looks. Oops I forgot to mention and this is important: I am not wearing pants. It’s 1992 and San Francisco after all. And this tour guide is staring at me and I’m starting to get mad… 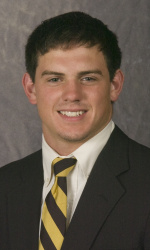 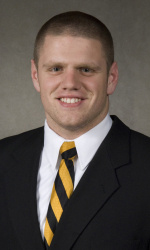