Share All sharing options for: Wha Happened? Week Three Around The Big Ten

Wha Happened? is the weekly round-up of the rest of the games that were in the Big Ten -- you know, the ones that were going on while you were shotgunning that beer, or watching Iowa, or sleeping off that early-morning tailgating.  Who won?  Who lost?  Who made us quiver with fear?  Who made us laugh hysterically?  In short... Wha Happened?

But seriously: don't look know but this isn't your older brother's shitty Illini team.  Nathan Scheelhaase remains the best quarterback in the Big Ten that no one talks about and while Jason Ford isn't making anyone forget about Mikel LeShoure (54 carries, 192 yards, 4 TD so far this year), he's been solid.  But the biggest surprise is the defense, the unit that lost their two best players from a year ago (LB Martez Wilson and DT Corey Liuget) has reloaded into a quietly formidable unit.  The offense sputtered against Sparky this week, but the defense bailed them out by holding the ASU offense to 4.6 yards per play, sacking ginormous ASU QB Brock Osweiler (6'6"!) six times, and intercepting him twice.  This Illinois team actually seems, well, legit.  (Cue: embarrassing and inexplicable loss to Western Michigan and renewed calls for Zook's head.)

PLACE
#7 WISCONSIN 49, NORTHERN ILLINOIS 7
It's Bucky Badger's world and we're all just renting space in it right now.  The Badger Pain Train took a quick trip down to Chicago and Soldier Field and used the opportunity to bludgeon a good Northern Illinois team into submission.  NIU kept it close for almost a quarter, but Wisconsin pulled away enough to lead 28-7 at halftime.  Russell Wilson was, once again, spectacular: 23/32, 347 yards, 3/1 TD/INT, plus 37 yards on the ground.  Shockingly enough, if you put a good player on a good team with good players around him, he puts up good numbers.  I know, I know -- breakthough analysis right there.  Meanwhile, the maligned Badger defense has quietly been improving, too: after a touchdown drive in the first quarter, they held the Huskies scoreless the rest of the way and kept their potent offense to just 237 yards (including 64 yards) and 11 first downs on the day.  The upper class of the Big Ten currently consists of Wisconsin and... no one else.

SHOW
NEBRASKA 51, WASHINGTON 38
Of course, we thought that the Big Ten's other candy-striped power run-happy team from the plains* would also be up there in the Big Ten's upper class.  But that was mainly because we assumed they were bringing a defense into the league that chewed nails and spit blood and was ready to show the Big Ten the true meaning of pain.  (Shh, just let them have their fantasies.)  If we had known they were going to be bringing a unit that was going to get gashed from sternum to crotch by the likes of Fresno State and Washington (38 points, 400+ yards), we wouldn't have bought so high on their futures.  They were still victorious in this game, thanks to some officiating on kick returns that made the officials in the Iowa-Pitt game look competent and an offense that's been quite potent with Taylor Martinez, Nebraska's floppy-eared Denard Robinson impersonator, under center.  Martinez ran for 83 yards and a touchdown on 17 carries and remains completely boom-or-bust through the air: 10/21, 155 yards, 2/0 TD/INT.  With the porous state of their defense, Nebraska is going to be in a lot of shootouts this year, which is probably OK so long as they have Martinez.  If something happens to him, though... 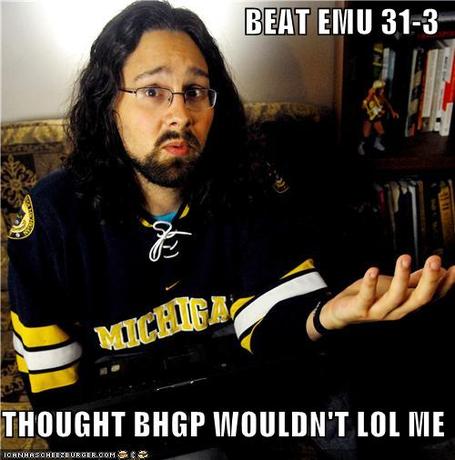 Also: if anyone can explain to me why Michigan felt the need to have Denard Robinson carry the ball 26 times (more than all of their running back carries combined) against Eastern Michigan, well, I'm all ears.

PENN STATE 14, TEMPLE 10
Last week, I suggested that Matt McGloin's almost impossibly bad 1/10, 0 yards performance was solid evidence that Penn State should scrap their asinine two-quarterback system and hand the keys over permanently to Robert Bolden.  So naturally Penn State didn't listen to me and went with a rotating quarterback system again... and this time it was the Ginger Avenger who was the better option (13/19, 124 yards, 0/0 TD/INT to Bolden's 9/17, 92 yards, 0/1 TD/INT).  Of course, neither option is exactly, uh, good.  Meanwhile, the Penn State defense was again quite good -- they held Temple to under 200 yards and 13 first downs.  They're a conference champion-caliber unit.  Unfortunately, they're joined at the hip to a cellar dweller-caliber offense.

MINNESOTA 29, MIAMI (OH) 23
Strange but true: four of the six teams in the Floyd of Rosedale division feature quarterbacks who are also their leading rushers.  Iowa and Michigan State, those fuddy duddy old pro-style holdouts, are the lone exceptions.  I point this out because Marqueis Gray had a whale of a game running the ball Saturday: 25 carries, 171 yards.  Which was good, because Minnesota needed every yard and point they could wring out of Gray (as well as a blocked punt returned for a touchdown that Gray had nothing to do with, aside from whatever positive vibes he was sending to the special teams): they were outgained by the RedHawks and came within a just-missed last-second heave of losing this game.

PURDUE 59, SOUTHEAST MISSOURI STATE 0
INDIANA 38, SOUTH CAROLINA STATE 21
Things were decidedly sunnier this week for the Hoosier State's football squads, although that's to be expected when a pair of FCS patsies roll into town.  Purdue took out a heaping helping of frustration on the hapless Redhawks: 50 points and over 600 yards of offense, including almost 400 yards rushing on 7.4 ypc.  Meanwhile, they held SEMO State to zero points and barely 150 yards of offense.  That's quite a good day at the office, even if an FCS punching bag is the opponent.  Indiana had a bit more trouble with SC State -- at one point the Bulldogs had narrowed their deficit to 31-21 early in the fourth quarter -- but they still finished them off with relative ease and ensured they wouldn't go the entire 2011 season without a notch in the "W" column.

Meanwhile, doing the Walk of Shame to the glue factory...

MIAMI (FL) 24, OHIO STATE 6
Holy hell, Ohio State, your quarterback situation is a goddamn nightmare.  Braxton Miller and Joe Bauserman combined -- combined! -- to go 4/18 for 35 yards and 1 INT against Miami on Saturday.  The same Miami that Maryland's quarterback gutted like a fish on Labor Day, mind you.  We need to reassess the "Penn State has by far the worst quarterback situation in the division" point, I think.  The running game was fine: Carlos Hyde and Jordan Hall combined for 141 yards on 26 carries, but that passing "attack" was so dreadful it didn't matter.  The defense handed two gift-wrapped Jacory Harris interceptions to the offense, but had trouble slowing down Lamar Miller, Miami's speedy running back who went for 184 yards on 26 carries.  Getting back the suspended "Tatgate" players will help the Buckeyes, but if the passing game remains this anemic, it's going to be a very long year in Buckeye-land.

NOTRE DAME 31, MICHIGAN STATE 13
Stop me if you've heard this one before: Michigan State can't run the ball, Kirk Cousins and the Spartan offense gives the ball away early (leading to quick points for the opposition), and Sparty gets physically bullied by a opponent.  I do believe I've seen that script before and every time it ends in Spartan anguish and brutal MSU beatdowns.  The Sparty defense actually played fairly well (they limited Notre Dame to 275 yards and 18 first downs), but they couldn't make up for a Spartan offense that couldn't run the ball 29 yards on 23 carries) and had some costly turnovers.  Throw in a special teams breakdown that led to a Notre Dame kickoff return touchdown and you can see why this one got away from Sparty in a hurry.  Notre Dame cut down on the crippling turnovers that had been the main contributor to their 0-2 start (only three this week!), which was enough to get the win.

Anyway, I'm sure MSU fans are taking this one in stride, right?

It’s time to regroup, put their shit in one sock, and move on for the rest of the season..

Remind me never to do laundry with SpartyMSU.

ARMY 21, just NORTHWESTERN 14
How do you lose to a team that goes 1/7 for 6 yards passing?  You lose because that team is Army and they run the ball 75 times (!) for 381 yards and 3 TD.  God bless the service academies and their old-school (but still effective, at least in one-off affairs) option attacks.  Army used the triple option (even running the goddamn wishbone on occasion) to play keep-away from Northwestern's offense (the jNW offense was on the field less than 20 minutes and ran just 57 plays all game) and ram the ball down their throat with a precise, powerful rushing attack.  While the defense's inability to get Army off the field was a major factor in jNW suffering their Obligatory Annual Non-Conference Loss, the limitations of fill-in quarterback Kain Colter were made painfully apparent, too.  He again led the team in rushing (57 yards on 10 attempts), but his passing was so woeful (12/23 for 89 yards and 1 TD) that jNW turned to QB3, Trevor Siemian, to jumpstart their sputtering offense late in the game.  He led one touchdown drive, but came up short on the potential game-tying drive.  Where oh where has #PERSASTRONG gone?

NEXT WEEK: Either a very boring week or a very humiliating week, as the Big Ten-MAC Challenge continues (with some bonus Sun Belt and Mountain West opponents tossed in to round things out), while Minnesota and Wisconsin battle the dastardly Dakotas, and a reeling Ohio State faces the lone BCS opponent on the Big Ten's docket, Colorado.