It got lost in the shuffle of HATE WEEK, but the full Iowa basketball schedule was announced last week.  It's probably worthy of a little discussion, no?

Every game involving Iowa should be available for your viewing pleasure this year (depending on who picks up the ISU and UNI games; Iowa/the Big Ten has no control over those broadcasts since the games will be in Ames and Cedar Falls), which is always nice (I think at least one of last year's Paradise Jam games was not able to viewed at all, although I may be mistaken).  On the other hand, it may take a bit more effort (and cash) to see some of the games, particularly if you live out-of-state.  Iowa has nine games on BTN.com this year, which is both an increase on past years and more than any other team in the league (Minnesota has the second-most, with seven, while Nebraska, Northwestern, and Penn State each have six apiece).

My suspicion is that it has more to do with the lackluster slate of opponents Iowa has in non-conference play (Boise State is the only one of the BTN.com opponents that anyone has even heard of, although I, for one, am excited for Iowa to play The Fightin' Joe Camels) than a conspiracy against Iowa and its fans, but don tinfoil hats as you see fit.  (Other Big Ten teams are getting their non-conference games against no-name bodybag opponents on BTN proper, after all.)  It's also worth noting that the BTN.com games (which are not free) are a much bigger issue for out-of-state fans than in-state fans (or at least in-state fans serviced by Mediacom), as there's a pretty good chance that Mediacom 22 will air the .com games for in-state fans.

Iowa also has six games on ESPNU (more than any other B1G team), including five conference games.  (In fact, only four Big Ten teams are playing any conference games on ESPNU: Iowa, Nebraska, Penn State, and Northwestern.  Having so many games on ESPNU is how Iowa can get away with saying that they have seven games being broadcast by ESPN this year, despite the fact that claiming to be on ESPN while airing on ESPNU is about like claiming to be on NBC while you're airing on The Channel Formerly Known As Versus.  But hey.

On the bright side, this schedule also features five weekend conference home games (including four Saturday games); in recent years, Iowa's had few conference home games on the weekend, which hasn't helped the attendance issues that have plagued the program.  Putting an actual winning team on the court will certainly matter a lot more than which day of the week the team plays on, but having more weekend games should make it easier for fans outside the Iowa City/Cedar Rapids area to show up.

As far as the schedule itself... we've discussed the non-conference slate in the past and as we said then: it's tailor-made to allow Iowa to rack up a lot of wins before conference play hits.  None of Iowa's non-conference games involve a trip out-of-state -- the only roadtrips are to Ames, Cedar Falls, and Des Moines (for a neutral-site game against Creighton) -- which means they won't leave the state until they head to Madison on New Year's Eve.

The Big Ten portion of the schedule is weirdly balanced.  Iowa plays three of their four single-play opponents (Ohio State, Michigan, Michigan State) within their first six games and they play Penn State twice in the span of less than two weeks later in the season.  Based on recent history, the front-half of Iowa's schedule looks tougher then the back-half: five of Iowa's first six league opponents went to the NCAA Tournament last year (and Minnesota probably would have if they hadn't completely imploded down the stretch).  But many of those teams will be rebuilding in 2011-2012, so getting them earlier in the season may actually be a benefit.  It's also definitely a benefit to only be playing Ohio State, Michigan State, Michigan, and Illinois just once this year, since those teams figure to finish in the upper half of the league.  Having a stretch of more beatable (on paper, at least) opponents near the end of the season could be advantageous if it gives Iowa an opportunity to put together a nice stretch of wins late in the year -- tournament selection committees look favorably on things like that. 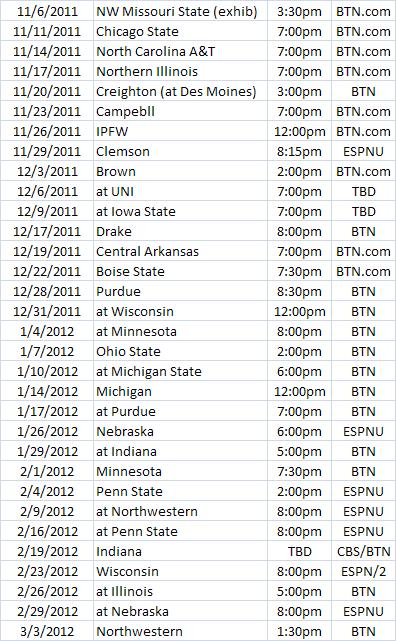