OMHR Fires New Shots Across The Bow In Our Eternal Conflict

Share All sharing options for: OMHR Fires New Shots Across The Bow In Our Eternal Conflict

The football season is fast approaching, which means most reputable blogs are busy publishing previews of their upcoming opponents, including our SBN blog-buddies enemies, Hammer & Rails.  They got around to their Iowa preview last week and SHOTS WERE FIRED, SIRS AND MADAMS:

And so the hatred comes to the fore. Forget Indiana-Purdue, Ohio State-Michigan, or even the new heroes game. Here is a rivalry so bitter that Jim Delaney himself ordered a two-year cooling off period in 2009 and 2010 as he feared it would spill over into an all-out war. Our rampaging armies of engineers would spill across the state of Illinois while our school of aviation would battle clones of Nile Kinnick resurrected by the necromancy department of the Iowa Med School in the skies over Chicago. Eventually, our nuclear engineering department would have to nuke Iowa City. Remember that folks: We (especially reader Boilernuke) can make The Bomb.

Well, if you think some piddly little nuclear bomb is going to stop our army of Nile Kinnick clones, THINK AGAIN, COMRADES: 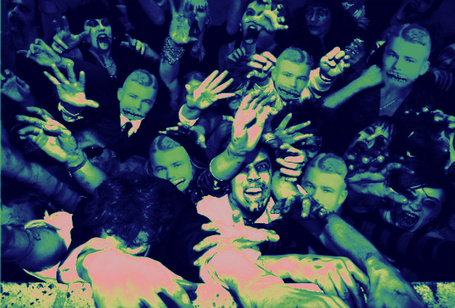 REVENGE IS A DISH BEST SERVED RADIOACTIVE AND WITH A 10,000 YEAR HALF-LIFE, DICKHEADS.

When the horde of radioactive undead Nile Kinnick zombies descends on West Lafayette and razes that shithole to the ground, we'll -- well, we'll probably be dead if we happen to be anywhere near Iowa City when the nukes go off -- but rest assured there will be fistbumps aplenty in the afterlife.  If it's war you want, OMHR, it's war you'll get -- just know that it will end with your brainmeats rotting between the glowing teeth of the clones of our Heisman Trophy-winning hero.