Because I always wanted to be a member of the Prize Patrol... 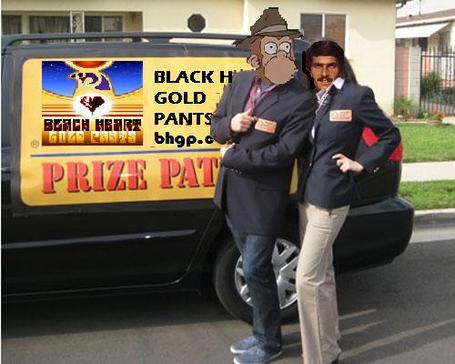 We already announced the BHGP College Pick'Em contest last week, but now we're back to tell you that there are prizes to be won. Gameday Depot (Iowa gear coming soon, I am told) is providing a $50 gift certificate to the season-long winner of the 2011 Black Heart Gold Pants College Football Pick 'Em Pool and $10 gift certificates to one winner each week. Here are the official rules of the contest, but the abbreviated version is that you can't win more than one pool across the SBN network (other sites are doing this as well) so don't even bother entering other sites' pools, you can't win more than once in any given 30 day period (except that winning a weekly contest at any time doesn't disqualify you from also winning the grand prize), and tiebreakers will be used to preclude ties.  The tiebreakers will be the default Yahoo! ones, so make sure to answer those when you make your picks each week.  If we need additional tiebreakers, they'll be as follows:

So if you haven't joined up yet, head over to Yahoo! and join the pool named "BHGP College Pick 'Em III.

Or join Group 4 since Group 3 is now full.

You have until 6:00pm CST on Friday, September 2 to join up and make your picks, so sign up and spread the word.  NOTE TO ALL: The weird glitch that had two phantom games included in the listing of the week's games (and which prevented you from being able to save your picks as "Complete") has been resolved.  And remember that these picks are against the spread.