Hello, friends. Those of you who have been reading us since at least last football season are likely aware of BHGP's partnership with Iowa Touchdowns For Kids, or as it's known here, TD4K. Last season was a success beyond measure, with BHGP readers pledging over $20,000 to the University of Iowa Children's Hospital in the fundraising program's first year of existence. We didn't imagine raising anywhere near that coming into the season, and your generosity is truly going to make a difference in the lives of families in desperate times of need.

Well, the new football season is right around the corner, and we're happy to announce that Iowa Touchdowns For Kids is back in action for 2011, and that Black Heart Gold Pants will continue being a proud partner of the program.

First, some background. The premise of Iowa Touchdowns For Kids is simple: before and during the season, donors pledge a specific amount of money for every touchdown the Hawkeyes score during the entire regular season (so if you join in mid-November, you're still donating for all 12 games). At the end of the season, those who pledged money are invoiced by the Children's Miracle Network, which facilitates this entire operation, and payment is taken care of then and given directly to the University of Iowa Children's Hospital. It's all tax deductible, of course, and since the fundraiser is limited to the regular season, it's for the 2011 tax year. Frankly, it's a fun way to stay even more engaged with the football team's on-field successes than you imagined possible, and to help a truly wonderful project take shape. More on that in just a bit.

We mentioned it last year, but it bears repeating, in bold: every single penny of your donation goes to the UI Children's Hospital. It doesn't go to "administrative costs," there is no financial reward for BHGP or any other partner for our roles, and BHGP is not involved with the actual collection process or any other money handling whatsoever. You're not donating to us or to fat cat administrators; you're donating to the hospital, period.

Oh, and the plans the hospital has in store. More on that after the break.

As we reported back in the winter, the University of Iowa Hospitals and Clinics recently announced final approval of a $5 million expansion to the facility that will be a dedicated wing for the Children's Hospital, in the form of a five-story tower. Currently, the UICH is the only children's hospital of the Top 20 in the nation without its own central facility; instead, it's spread out over the entire UIHC, interspersed with the "regular" hospital wings, which means a round of tests can send an ailing child and his/her family all around the hospital over the course of a day. And yet, even with that logistical nightmare in place, again, the UI Children's Hospital is still ranked in the Top 20 in the nation. Consolidating everything the children need into one wing reduces burdens on families, their children, their doctors, and also the rest of the hospital.

Moreover, it's not just "a new wing"; it's also going to look pretty cool. 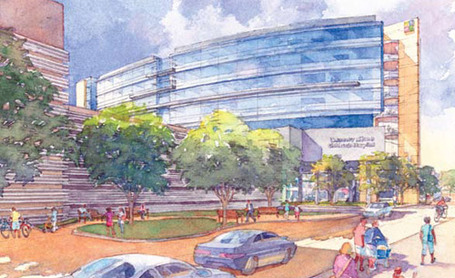 That's what the new tower's going to look like, and yes, that's the south entrance of Kinnick Stadium at the far left of the design. In other words, the tower's going to directly overlook Kinnick Stadium, so if you're at a game after construction's complete and you're a donor, you can look right there at the new facility and say, "I helped make that happen." That's something to be damn proud of.

Last year, we had a bragging thread for pledges, if people so chose to participate; not everybody did, but that's cool, because not everybody has to. But let's face it, for some of us, giving to a worthy cause feels really good, and so does sharing the good news. We'll be having another one of those this year, right here.

We're also still working on lining up some podcasts or FanPosts from special guests, but with over 40 Hawkeyes currently in NFL camp (including unequivocal hero of the UI Children's Hospital Ricky Stanzi), getting some free time from any of these guys has been, to say the least, a challenge. We'll figure out a way to have some interesting folks on to talk about Hawkeye sports and the UICH, though. There's really no shortage of stories to tell on either front.

Further, we'll be announcing this year's t-shirt for which all of BHGP's proceeds will benefit the UICH; last year, it was the wildly popular Friend Of The Pants shirt. As soon as that call's made, we'll let you know.

And finally, look, I said it last year and I'll say it again: I don't believe in quotas or hard fundraising goals or whatever you want to call them, because that introduces the possibility of "underachievement" or "disappointment" in this endeavor, and that's the last attitude we ever want to foster with this. Raising -- or donating -- money for charity is an awesome thing to do. It doesn't matter what other websites raise, or other partners of TD4K raise, or what other children's hospitals raise. We're not competing with them. We're competing with ZERO, which is the amount of money that BHGP raises for TD4K when we choose not to get involved. So pledge what you can. If you don't have the means to pledge anything, even though invoicing doesn't happen until December, that's fine. Take care of you and yours first. If you can't donate as much as last year, but you can still pledge, that is awesome! And I you can donate more than you did last year, again, that is awesome! Just know that it's going to a great cause, and that it's going to help develop an even stronger pillar of the Iowa City community, the University of Iowa, the state of Iowa, and all the families therein.

Are you sold yet? Show your support by clicking here, selecting "Make A Pledge!," and following the instructions thereafter. Be sure to select "Black Heart Gold Pants blog" on the "How did you hear about this event" pulldown on the next page if you want your pledge to be counted with the rest of ours, and to help demonstrate how awesome our community truly is. Seriously, we have so, so much to be proud of as a community for our pledges and donations last year. Let's do it again. And BHGP will kick things off with a $5 per touchdown pledge. Can you match us? Can you do $3 per score? Even $1?