Iowa Corn And The Indecent Proposal

Share All sharing options for: Iowa Corn And The Indecent Proposal

... well, of course I appreciate the thought, Mr. Dodds, but I don't know if Texas State University at Ames is really how we want to brand ourselves right now.

Sir, you have some visitors.

Sorry, Mr. Dodds.  Gotta run -- I promise I'll, uh, get back to you on your suggestion soon.

It's a group of representatives from Iowa Corn.

Okay, let's cut the chit-chat and get straight to business, Jamie.  I'm gonna make you an offer you can't refuse.

An indecent proposal?!  Sir, I appreciate the offer, but I don't think the missus will go for that, so --

Jamie, I don't want to fuck your wife.

No.  I want to buy your whole got-damn program, son.

-- she would have been pretty cross with ol' Jamie and, wait, what?

I said I want to buy up the entire athletic department, son.

Now, I ain't gonna blow smoke up yer ass just to make ya feel good.  You weren't my first choice.  But Barta just laughed at me and lit some BTN checks on fire and threw 'em at me.

That's great, but those deals are gonna be about as useful as employin' a eunuch in a whorehouse because the Big 12 ain't gonna exist in five years, son.

Now, that's just not true!  Mr. Dodds promised me that he'd keep us all together.

And you bought that line of bullshit?  Son, DeLoss Dodds would whore out his mother if he thought he could get a few nickels out of it.

I don't understand, though.  If you don't think we'll even be in the Big 12, why would you want to buy us?

Ha!  I don't care who you play or how good you are.  I thought we'd already proven that we don't care if we're associated with shit.

Son, we just want you as a tax write-off.

Is that even legal?

Now there would have to be a few changes, of course.

I don't think they'll be any big deal.  You guys haven't exactly been too shy about switching things up.

Aw, it don't matter.  Hell, the national media don't even know what your name is.  So we're gonna change it.  I'm thinking The Iowa State Cornlovers presented by Iowa Corn.  Really rolls off the tongue, don't ya think?

We'll be changing the helmets, of course.  Again.

And we'll be replacing your goofy old mascot with Captain Corn here.

Pray pardon me, sir, but you are wearing no breeches.

Be that as it may, your slovenly appearance makes you appear quite arsy varsy and rather lacking in culture.

Oh now you're just being mean.  Cy's been clean and sober for eight years now.

Sir, I fear once the demon firewater has sunk its talons deep within a man, he shall never again be free of its deadly temptations and sweet siren song.

Enough already!  You nancy-boys are just makin' me thirsty.  So how 'bout it, Jamie?  Are you gonna take my offer?

Er, how much were you offering again?

Have a seat, Jamie.

Do you know who I am, Jamie?

Mr. Pollard will be fine, thank you.

I'm Charles Robinson, crack investigative reporter for Yahoo! Sports.  And you, sir, have just been SCANDAL'D.

You probably want to know how I broke down your walls of lies, your insulation of half-truths, and your drywall of outright fabrications, don't you?

That is a painfully strained metaphor.

/yet again ignoring him

It all started earlier this off-season, when I was in Iowa to investigate your big brother program, the University of Iowa --

Actually, according to the Board of Regents, we're equals.

That rhabdomyolysis debacle seemed like it had the potential to be one hell of a scandal.  You can imagine my disappointment when that just fizzled out.

But then I noticed your uncommonly high placement in the Fulmer Cup.  I was intrigued!  Perhaps I was focusing on the wrong program in the Hawkeye state!

At first, I was dismayed that they were mainly just penny-ante drinking charges, but it takes more than that to throw the Chuckster off a story!  My journalistic nose kept at it.  Because the nose knows, Jamie.  The nose knows!

But we weren't doing anything else illegal --

So I set up camp in this cow pasture you call a college campus.  I interviewed hundreds of residents, I dug through your garbage, I tapped your phones...

And it was that last action that landed the smoking gun in my lap: proof of you accepting bribes!

You know, I didn't actually accept anything, so --

/completely unaware anyone else is talking

How does a little "lack of institutional control" sound for this here "rogue program," Jamie? 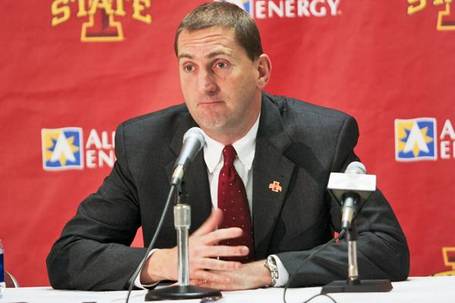 On campuses tiny and on campuses mighty, no scandal shall escape my sight!

I hate my life.