Iowa State Stole Our Drum!; or, The Virtues Of Design By Competition

Share All sharing options for: Iowa State Stole Our Drum!; or, The Virtues Of Design By Competition 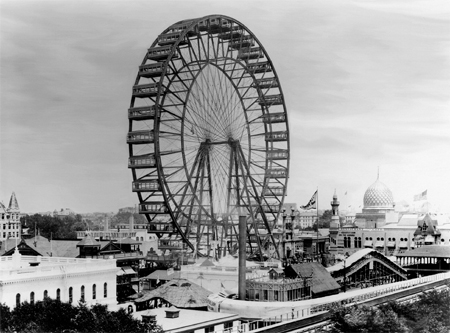 In a way, we should thank the Iowa Corn Growers Association for filling these late August days with a healthy dose of unmitigated scorn (more like Iowa Scorn-Growers Association, amirite?). Their trophy, entitled "Family Saddened By Corn", has provided all of us with some good laughs, funny "kill it with fire" photoshops, and a humorous addition to the Wikipedia entry on the Cy-Hawk trophy ("More traditional rivalry trophies usually have a simpler design, depicting something that is of historical interest or something that evokes the roughness of the sport...").  And now that there is an announcement afoot to respond to the outcry, we may not even have to suffer through looking at the monstrosity on game day.  But before that sculpted farmer and his ennui-filled family fade into the mists of internet memory, it's important that fans, schools and, most importantly, corporate sponsors learn something from this debacle.  The clearest lessons are these: trophies are tricky things to get right, it is a very hard thing indeed to impose a trophy on people against their will, and companies would be wise, at the very least, to run these things by a janitor or someone before dropping them on the public.

But the lessons go beyond that.  Trophies are weird community symbols, metaphors for the spoils of war, and repositories of psychic angst; good luck to the designer who finds those requirements at the top of his or her spec list.  Because trophies function primarily as symbols of either exultant victory or shameful defeat, I'm not sure if companies should even try to attach their name to them in the first place -- do you really want Cyclone fans associating their gnawing sense of failure and inferiority with Iowa's corn farmers? -- but if they absolutely must pursue these follies, then their first job would seem to be ensuring that the object is at least acceptable to the community.  Focus groups might help, or some sort of quiet pre-release polling, but there is another path that would, in my opinion, generate better ideas, better designs, and, by virtue of the process itself, ensure the legitimacy of the final product: make the design of the trophy a competition open to the public.  Iowans are smart, creative people with skills that go beyond the cultivation of corn and careful scrutinization thereof, and they simply care more about the damn thing.  Let them design the trophy.

What would such a trophy have looked like? That's the best part: I have no idea.  It would look like whatever the best idea hundreds of thousands of Iowa and Iowa State fans could come up with would look like.  It would draw on the historical knowledge, creativity and design abilities of an entire state of people who deeply, deeply love football.  It would probably not look like the very first idea that the laziest hack would scribble down in his notebook -- "Iowa, corn, done" -- but instead would represent something new, surprising, and impressive enough to wow a panel of judges or the voting public.  In other words, it would be, at the very least, interesting. There is a long history of competitions being used as the spur to great public art: the Acropolis, the dome of the cathedral in Florence, the British Houses of Parliament, the Ferris Wheel, the Tribune Tower in Chicago and the Sydney Opera House were all the result of some sort of competition.  The ICGA doesn't have the budget of, say, the British government, and I don't mean to elevate the Cy-Hawk trophy to the level of high art, but the point is that competitions do an amazing job of inspiring creativity, especially when a sense of local pride is on the line, and could be a great tool for the design of trophies in the future.

Here's a personal example of how fruitful even the most amateur efforts to generate ideas can be. In the hopes of finding a better trophy idea, I went to Google and started searching. After a few minutes, I found this excerpt of a 1908 speech entitled "Intercollegiate Relations in Athletic Contests" by a University of Iowa professor named A.G. Smith (particularly interesting portions are in bold):

I wish now to speak briefly of a situation that has existed during the past year between Iowa State College at Ames and our own University. These two institutions both supported by the same State are and should be sister institutions in every sense of the word. As a result of the perhaps somewhat limited financial support accorded to both institutions there has been a natural feeling of rivalry along that line just as there has been an exactly similar rivalry between two different insane asylums of the state. There has been a natural competition for students and these questions have added their weight to the rivalry in athletic contests. Athletics, as I have said before, have grown so rapidly that the institutions have not had time to adapt themselves to the changed conditions and ardent supporters of both sides have been led into words and acts, ill-becoming to either institution. A similar condition existed between Grinnell College and the University years ago and as a result feeling ran so high that one game was followed by a practical riot and the two institutions were compelled mutually to suspend athletic contests for a year. The contest in football between Ames and Iowa about five years ago assumed the position of being the state championship game. Had the institutions represented neighboring states, the contest would have been marked as one of interstate rivalry with the people of each state standing by their own institution. Instead we had the people of one state divided among themselves. We had all the elements of fraternal strife and it is a well known fact that no rivalry is so intense as fraternal rivalry. The feeling became so intense that following the game at Ames in 1905 a demonstration against the Iowa train was made and the drum stolen from the Iowa band. There is no question in my mind but that this was almost entirely the work of outsiders, but it had its effect upon the minds of all here. The following year, 1906, after the game here, there was some rough play and one of the Iowa players was accused also in the game of having willfully fouled an Ames man. I was assured by a member of the Ames faculty that stones were thrown, one of them striking the car window near his head. I believe here also that most of this represented outside work, but it had its effect as surely as though it had been done by the members of the student body only. In the game at Ames in 1907, a player of the Iowa team was very seriously injured by a reprehensible and inexcusable play on the part of an Ames man-I do not believe a willful act on his part. This was shortly followed by the knowledge that an ineligible player had taken part in the contest, and it was believed by the Iowa Board, perhaps a mistaken belief, that the Eligibility Committee of the other institution had not taken proper precautions in the case. As a result, the Iowa Board felt that it was best to sever athletic relations for a time. The Reppert-Kirk affair, as it has been called, was not the ground for this severance of relations. It had its bearing only as it excited the intense feeling, the unwholesome rivalry, to colossal proportions.

It's a fun piece to read throughout, not only for its "times haven't changed" quality (an ineligible player in college football? My stars!), and it's incongruous details (the Grinnell-Iowa rivalry once caused a riot?) but for its view of a time when the Iowa-Iowa State game verged so closely to anarchy that the contest was suspended. And best of all, there is a perfect idea for a trophy contained in these comments: Iowa State stole our drum! I don't know how this has been allowed to stand for over 100 years, but this aggression will not stand. Here's what my submission to the hypothetical Iowa-Iowa State design competition would look like: 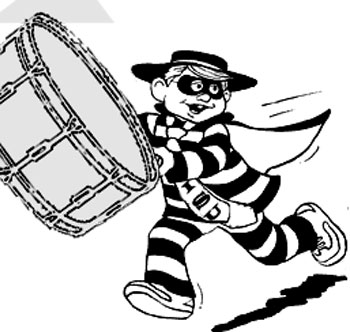 Okay, so maybe that's not so great, but I provide it just as an example of what turning the process over to the people could do: if one person can uncover one nugget of history and make a trophy idea out of it, what could 100,000 do?  And imagine if a few of those people were actual, you know, artists?  The economy, if you haven't noticed, is not doing so well, so there are doubtless many, many talented people out there with time and ability to help design a trophy in exchange for prize money and state-wide recognition.  I have already seen solid suggestions all over the internet, and an official competition would only focus the efforts of the fans and draw even more creative types out of the woodwork.  I doubt the ICGA will take these kind of steps (it's a little late in the game for that), but for future games --  the Heroes Game, for instance -- there is no reason other companies and schools should be forced to fall into the same snake-pit of mockery and bile that Iowa Corn did.  All these companies have to do is heed this simple plea: open the competition to the public.  We work cheap, there are lots of us, and we care about football to an unhealthy and irrational degree.  Use that.

[Feel free to leave your ideas for a better trophy in the comments, either described in words or actual photoshop/sketches if you're ambitious]