Players to watch for in 2011: Royce Bonenberger - The Summit

Share All sharing options for: Players to watch for in 2011: Royce Bonenberger - The Summit

What you need to know:
Who is this jabroni?
He's a 5' 10" 170lb bartender from Libertyville (or whatever northern Chicago suburb you want),  IL

What has he accomplished?
Made up a fake resume claiming he had 2 years of bartending experience at Mickey Finn's.  Luckily, his fratbro was the hiring manager so it didn't really matter but he wanted to cover all his bases.  He's mastered the art of the long pour for the ladies and serving straight Diet Cokes to the GDI's.  He is capable of eye-fucking a girl on the other side of the bar while over-charging some dude who looks like a weak tipper.  Has a keen ability to look straight past some guy who has been waiting for 25 minutes so he can serve the hot chick standing behind him.  Holds single-night record for fist bumps with 174.

I have to stop now because CycloneFanatic.com just reached a collective climax into their shorts.


Why should you not be worried about him?

What is the most likely outcome?
Kirk Ferentz breaks all of his teeth by stuffing that shitty new Cy-Hawk Trophy right down his fucking throat. 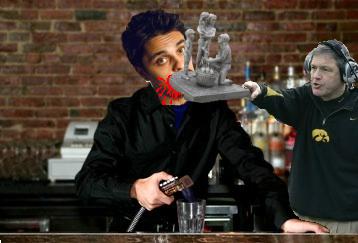