Share All sharing options for: It's Not Plagiarism If You Link To It Wonders About The Manchurian Candidate's Coverage Skills

The Sleeper Agent.  The one constant about the 2011 Iowa football team since spring has been that outside of Shaun Prater at one cornerback spot, the defensive back situation is clear as mud.  Except things are starting to clear up now that the beginning of the season is in sight (less than two weeks!).  While Ferentz didn't explicitly confirm whether or not Micah Hyde is staying at free safety, every indication is that he's staying put.  Which leaves Greg Castillo and B.J. Lowery to duke it out for the other cornerback battle (a battle which Castillo is still winning, by all accounts).  But whither strong safety?  Who's slated to fill in for Tyler "Motherfucking" Sash in the Iowa defensive backfield in 2011?  That too seems to be a two-man battle.

In one corner, the people's champion and interwebs legend, Jordan Bernstine.  Bernstine's history at Iowa has been well-documented, but if you need a refresher course, Mas Casa has you covered.  In short, he's had the worst injury history of any recent Iowa player this side of Dace Richardson and he's had the misfortune of trying to unseat future NFL draft picks like Amari Spievey and (presumably) Prater.  That he also apparently can't beat out either Castillo or Lowery suggests that perhaps he was never meant to be a cornerback.  Enter: the strong safety job.

In the other corner, the depth chart leader and Iowan man of mystery, Colin Sleeper.  Sleeper's history at Iowa has been far less well-documented, but Morehouse and Harty have filled in a few details.  In short, he's the latest cog to come off Iowa's walk-on safety assembly line, following in the proud footsteps of Derek Pagel, Sean Considine, and Brett Greenwood.  Despite not yet playing a single live snap as a safety, Sleeper's probably the favorite to win the job.  Here's the money quote:

"I thought he had great eyes," DiNardo said after watching Sleeper practice. "He always knew what was going on back in the secondary."

If the last half-decade has taught us anything, it's that the the Iowa coaches value intelligence and the ability to read a play and be in the right position over raw athleticism and the ability to deliver a big hit.  And you'll never go broke betting on the walk-on safety to play at Iowa.

The Running Men.  Sixteen months ago, we were trying to figure out how Ferentz and O'Keefe were going to find a way to divide carries between the talented running back troika of Adam Robinson, Jewel Hampton, and Brandon Wegher.  If you want the most exhaustive rundown yet on how we went from that point to a present day featuring Marcus Coker and a cast of unknowns, Morehouse has the story in all its juicy, absurd, AIRBHG-riddled details. Meanwhile, the battle to back-up Coker has been one of the more intriguing subplots during fall practice, with true freshmen Jordan Canzeri and Mika'il McCall garnering the most buzz at the Kids' Day practice a week ago.  McCall in particular seems likely to earn a solid amount of carries, which should be exciting news for any Iowa fan who's missed seeing Iowa running backs treat oncoming defenders like crash test dummies since Shonn Greene took his talents to the NFL.  Also, we need to get to work on a nickname for him; if his dad (heavyweight boxer Oliver McCall) is The Atomic Bull, the standards are pretty high.

Eric Guthrie is just here to wreck fools.  It's puff piece preview season and not even punters are immune, as evidenced by this Hawk Central piece, which spends a lot of time talking about Eric Guthrie's long, strange trip to the starting punter gig:

"It’s just been a huge change from where I came from," Guthrie said. "In high school I was not good at all. I don’t even know how I ended up here. They took a shot on me."

Guthrie looks more like a power forward at 6-foot-6 and 245 pounds. His long levers help provide power, but they also mean he has to drop the ball farther to his foot.

"I don’t have to be quite as quick or explosive to have the ball go as far," Guthrie said. "But it makes it tougher to be consistent."

Is it wrong that I really just want to see him tackle someone, though? 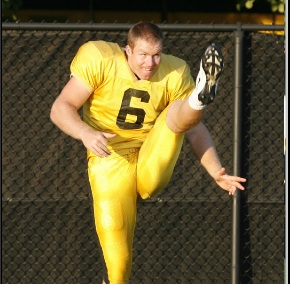 Come on, he's bigger than like half our linebackers. Also, this is a really strange line to toss off and not elaborate on:

The insurance on Guthrie — who on media day said he did not have a scholarship yet and didn’t have the money for a fifth year of school — not being ready for prime time is thin. (emphasis added)

Uh, what?  Doesn't that need a little more elaboration?

* mgoblog provides yet more statistical evidence that Iowa football has been really, really good at player development under Ferentz.

* Is there nothing about Iowa that Wisconsin won't copy?

* The Iowa women's basketball team finished up a successful European adventure last week; incoming freshman Samantha Logic averaged a double-double on the trip, which is a promising sign.

* Clone Chronicles gets the Colbert Bump...

*... but Iowa State loses the quarterbacking services of Jerome Tiller, paving the way for the emergence of Steele Jantz, which the BHGP oracles predicted months ago.