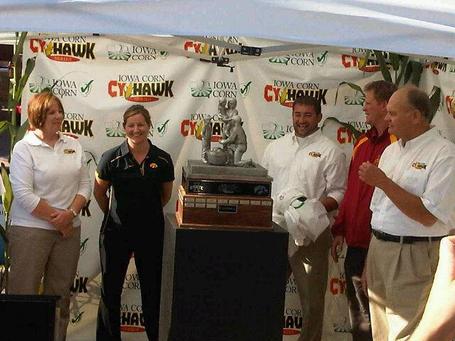 And a bigger version of the top of the trophy, courtesy of Todd Brommelkamp:

In case you can't tell what the hell the new trophy is, here's the official description:

The trophy shows a family talking after a long day of work.

"The scene of a family talking after a day’s work is representative of our state," ISU athletic director Jamie Pollard said.

From a certain aesthetic sense, the new trophy is a step up from the previous version: it no longer looks like something a badly hungover shop teacher cobbled together in fifteen minutes. Unfortunately, it also now looks like something that belongs at one of the arts and crafts booths at the Iowa State Fair. Wait, did they just... nah. It also features the Cyclones' current "I-State" logo, which will surely be out of date within 18 months. But, hell, let's take another look and, say, I wonder what sort of track record Iowa Corn has with designing things:

... oh, for fuck's sake, this whole enterprise was doomed from the start.