Share All sharing options for: The Quest For History: Iowa Releases 2011-2012 Wrestling Schedule 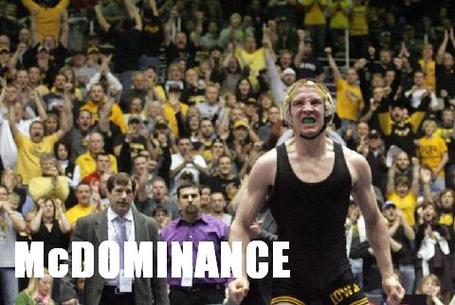 Iowa finally released the 2011-2012 wrestling schedule yesterday, which is significant for a few reasons.  One, it allows us to get a sense of what the season will be like and who they're facing (and who they're missing, too).  Two, it allows us to finally chart their potential path to history -- and a new NCAA record.  Iowa's 69-meet winning streak came to a halt in Stillwater last year, but since Iowa had a sister-kissing draw with the 'Pokes in that meet, the streak didn't end entirely -- it just transformed into an "unbeaten" streak.  That unbeaten streak continued through the end of the year, including stirring (and slightly surprising) wins at Penn State and at Minnesota.  Iowa ended the 2010-2011 season as holders of a 77-meet unbeaten streak, which is notable because it's within sniffing distance of the all-time NCAA record of 84, held by Oklahoma State.

An unbeaten streak doesn't have quite the same cache as a winning streak, but 77 meets without a loss is damn impressive and setting a new record would be more impressive still.  Tom Brands has a long (long) way to go when it comes to catch Dan Gable in terms of national and Big Ten championships, but setting an NCAA record with this streak would give him that rarest of feats: an accomplishment that actually surpasses Gable.  So what's the road to history look like?

The Lindenwood University Open and Midlands are tournament events, so (obviously) they won't count towards the dual meet streak.  So based on the schedule above, Iowa could tie the all-time unbeaten streak record at Indiana on 1/6/12... and have a chance to break the record at home against Oklahoma State, the current record-holders, on 1/8/12.  Wow.  That's already an incredibly heated dual, given the long-standing history between the two programs (they're the two undisputed kings of the sport) and the diametrically opposed styles they tend to represent.  Add in the desire to avenge last year's draw and a chance to set history at the 'Pokes expense?  I think it's safe to say that Carver will be rocking for that meet.  (And I didn't even mention the fact that, in a dual meet setting, Oklahoma State may provide the stiffest test of any Iowa opponent this year.)

Other thoughts on the schedule:

* It's fun to see Iowa in tournaments and the Lindenwood University Open may provide a few nice early challenges for Iowa wrestlers.  I haven't seen a list of the 2011 participants, but the 2009 incarnation featured wrestlers from Missouri, Oklahoma, and Illinois; hopefully the '11 version features a comparable level of talent and Iowa isn't beating up on D-III caliber opposition.

* ... Especially since they're going to be doing just that at the Iowa City Duals a week later.  It's pretty dispiriting that the best teams Iowa can bring on for this event are Baker College, Cornell College, and Iowa Central Community College.  If they're going to go that route in terms of scheduling, they should at least try to get defending Division III national champion Wartburg to come down the road.  Also, why schedule that event on Black Friday?  Did they somehow miss the fact that there's another kinda important Iowa sporting event happening that same day?

* Mind you, there's the potential for even more football-induced scheduling angst if Iowa makes the inaugural Big Ten Championship Game.  It's slated for 7pm CST on Saturday, December 3, the same day as the Iowa-Illinois dual in Champaign.  Still, at least there's no guarantee Iowa will be playing on that day, unlike the Black Friday snafu.

* On the whole, it's a tough schedule: seven of the fourteen dual meet opponents finished in the Top 20 at the 2011 NCAA Tournament.  It's a particularly brutal Big Ten slate, since Iowa gets the other two league heavyweights (Penn State and Minnesota) as well as two of the toughest teams from the next tier of competition (Ohio State, Wisconsin).  The other four league foes -- Illinois, Indiana, Nebraska, Nerdwestern -- should each have a handful of challenging individual foes, but probably not the overall team depth to upset Iowa.  Still, if Iowa makes it a fifth straight year with an 8-0 league record, they'll definitely have earned it this year.