Woody Orne Is A Large Human Being

Share All sharing options for: Woody Orne Is A Large Human Being

In these dog days of summer, as football fans we find ourselves poised in an awkward spot.  On one hand, there is a genuine light at the end of the tunnel for our football-famished souls: real, honest-to-god games will be upon us in a scant few weeks.  On the other hand, those "scant few weeks" seem even more interminable and torturous with the finish line actually in sight.  As Tom Petty once said, "There's a gator on my lawn."  Wait, that's not right (although he did say that).  No, he said, "You see you don't have to live like a refugee."  Shit, that's not it, either.  Anyway...

So with football almost upon us but not actually here yet, what's a football junkie to do to get a fix?  Why, to turn to the information that leaks out of practice, of course, be it legititmate news stories, message board whispers, the occasional video, or practice photos.  Ah, practice photos.  Because there's nothing at all weird or creepy about obsessing over still photos of 18-22 year olds in shorts.  The Iowa SID releases 1-2 sets of practice photos every day and while there lots of observations one can make from them, one thing in particular leaped out at me earlier this week: Woody Orne is pretty goddamn big.  See? 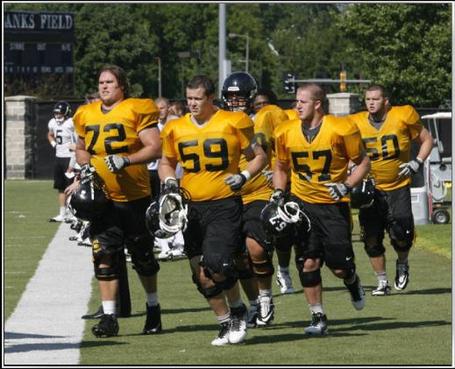 Sure, Orne (#72) looks pretty big there, but I was convinced that picture didn't tell the full story, so I did a little more investigatin'.  I think I was right, as evidenced by these shots of Orne in the wild: 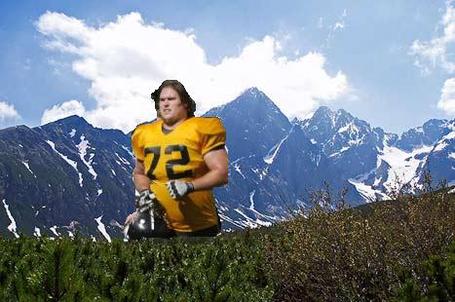 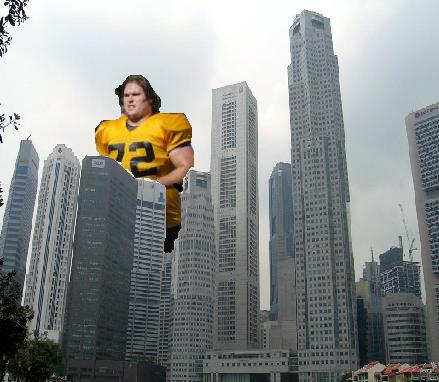 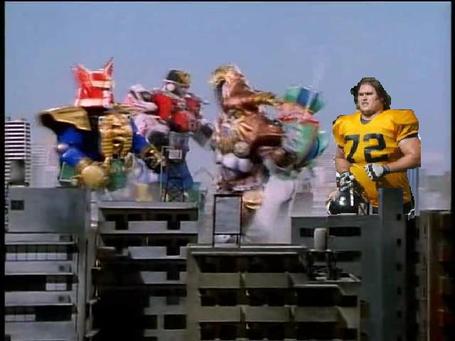 There you have it.  Conclusive evidence that Woody Orne is a gigantic specimen of humanity.  Now, if you'll excuse me, I need to email Kirk Ferentz and find out why this leviathan isn't starting yet.