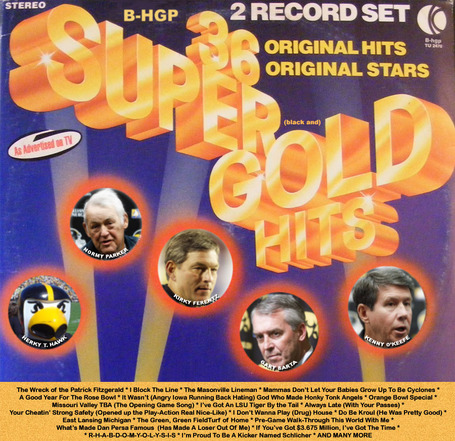 In a surprising development, Kirk Ferentz and his coach staff announced after practice Thursday that they would be releasing an album of Hawkeye-themed musical parodies.  The album, entitled "35 Super Black and Gold Hits", has been a work in progress since early June, when Ferentz and Defensive Coordinator Norm Parker heard an early version of "Hawkeye Yellow", an Iowa football-themed parody of Wiz Khalifa's hit "Black and Yellow."  Ferentz tells the story:

"The way it happened was this: somebody sent us this "Hawkeye Yellow" joint, and we were shocked.  You see, we had been talking about doing just this kind of thing, and those guys beat us to it."

"It was our ‘Pet Sounds'" moment," added Parker.

"So we looked at the schedule, noticed that we had a week in July marked for ‘playbook expansion', and thought ‘we've got some free time -- let's do it.'   I dusted off my ol' six string, Norm got out his stand-up bass, and with the help of some left-over thigh pads and field turf, we turned conference room C into a serviceable record studio.  We knew Gary Barta plays some drums, and Herky of course is a very talented keyboardist and production wizard, so the band was pretty much set."

"Then Ken O'Keefe showed up with his own wood block, so our songs also feature wood block."

The group, informally known as "The A-Gap Band", in studio.

When asked to describe the record, Ferentz called it "encyclopedic": "It has everything , from Lefty Frizzell to Gordon Lightfoot."

When asked if they ever expanded beyond the boundaries of the country and western canon, Ferentz said that they did experiment in that direction.  "Kenny brought in about 100 tracks that he recorded in his basement, but it was all Hawkeye-themed reggaeton, and it was just ... upsetting.  And of course Herky has his hours of tape loops - you know, Hayden Fry singing ‘you put your right foot in' repeated and distorted over and over for twenty minutes straight - but we wanted to keep things simple."   The result is a two-record album chock-a-block with Hawkeye nostalgia, sweet melodies and Ferentz's unique, uninflected, monotone singing voice.  Tracks include crowd-pleasers like "I Block The Line," "The Orange Bowl Special" and "I've Got An LSU Tiger By The Tail," but also more mournful, introspective songs such as "What's Made Dan Persa Famous (Has Made a Loser Out of Me)", the Tammy Wynette parody "R-H-A-B-D-O-M-Y-O-L-Y-S-I-S" and "Don't Wanna Play (Drug) House".

Ferentz added: "We wanted to represent the light and the dark of Hawkeye football, and address the controversies in a direct way.  We also threw in a 20-minute Gary Barta drum solo, purely on its merits and not due to any threats or intimidation."

"35 Super Black and Gold Hits" is available through a special TV offer that will run on the Big Ten Network at 2-4 a.m. throughout this fall. "Ken O'Keefe's Top 100 Reggaeton Riddims" comes out in October.