Share All sharing options for: It's Not Plagiarism If You Link To It Actually Is Watching Paint Dry

Hello, floor.  Courtesy of @IowaHoops, a look at the new Carver-Hawkeye Arena floor for basketball. 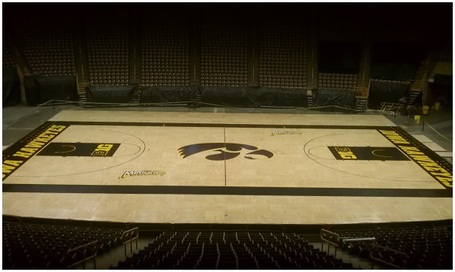 (Edited to include a better look at the entire court.  The previous, in-progress shot is available here.)

McRecords?  Marvin McNutt is on the cusp of history when it comes to Iowa receiving records:

McNutt now carries 215 pounds on his 6-foot-4 frame. He’s been clocked at 4.5 seconds in the 40, and he runs routes and catches passes with the polish of a lifelong wideout.

In two seasons as a full-time receiver, McNutt has posted a pair of the most prolific seasons in Iowa history. He caught 34 passes for 674 yards and eight touchdowns in 2009 and backed that up with 53 grabs for 861 yards and eight scores last season.

With similar production as a senior, he could leave Iowa with more touchdown catches than any player in school history — Tim Dwight and Danan Hughes hold the record with 21 — and finish near the top of the program list in receiving yards.

Not too shabby for a guy who showed up on campus as a dual-threat quarterback.  I don't think the yardage record will fall (he'd need an all-time great season for that to happen, which is possible but unlikely), but the touchdown mark should get toppled.  (He's six shy of setting a new record now.)  My guess is during the Indiana game on 10/22.  What say you?

To the duals.  The Iowa wrestling schedule is in the process of being finalized (it should be out next week), but another brick in the wall dropped into place with the news that Iowa State was selected to host one of the four regionals at this year's NWCA National Duals Tournament, the first incarnation of the event under their new format.  No word yet on whether or not Jamie Pollard plans to curtain off part of the arena for this event, too.  It's unclear why Iowa wasn't selected to host the event, although it's entirely possible that CHA was already booked for an event on Feb. 12.  (We'll know in a few weeks when the conference schedules are released for men's and women's basketball.)

Along with Iowa State, the other teams in Iowa's regional are UNI, Wisconsin, Virginia Tech, and Oregon State.  (Amusingly, every team but Iowa State is coached by a former Iowa wrestler.)  The top two seeds in each regional get byes; odds are very good that Iowa will be one of the two teams to get a bye in this regional.  Finally, if you want to get a little bit of a look at the new Dan Gable Wrestling Complex inside the renovated CHA, here's a video (it doesn't show a ton, frankly).

Should I stay?  Really?  Anecdotally, decommitments and transfers seem to be all the rage in college basketball (and football, too, but especially in basketball) in recent years.  SI writer Luke Winn decided to put that anecdotal theory to the test, though, and ran the data.  It's fascinating stuff, and particularly relevant to Iowa.  Why?  Because Matt Gatens in the outlier of outliers:

Matt Gatens of Iowa City, Iowa, the No. 89th-ranked recruit in the Class of 2008, committed to the Hawkeyes in June 2005, after his freshman year of high school. The coach he committed to, Steve Alford, left for New Mexico in March 2007, but Gatens stuck with Iowa through its hiring of Butler's Todd Lickliter, and enrolled at the school. After three straight sub-.500 and multiple waves of player departures, Lickliter was fired from Iowa in 2010. That was after Gatens' sophomore year, and he declined to transfer, remaining with the Hawkeyes after they hired Siena's Fran McCaffery.

Gatens was the lone recruit in the entire database to commit to a school under one coach, hold that commitment despite a coaching change, and not transfer upon the occasion of another coaching change. In an age where nomads run the floor and mercenaries stalk the sidelines, it should not come as a surprise that the ultimate outlier is someone who simply refused to leave home.

Gatens' loyalty to the Iowa program over the last few years has been beyond admirable; plenty of kids (particularly relatively high-profile recruits) would have bolted after enduring one coaching change, let alone two.  Hopefully Gatens' decision to stay put is rewarded with a good senior season.

* Prepare to lower the panic levels: Darian Cooper is back at practice (see pic #9).

* BTN announced their on-air talent for the 2011 football season and the influence of OMHR continues to spread: Joe Tiller will be wagging his lip-warmer on BTN this fall.

* Ever want to know what it was like to wrestle under Dan Gable at Iowa in the late '80s?  Enter: Wrestling for Gable, an excellent blog from Todd Tarpley.

* At least one Nebraska paper already thinks recent Iowa hoops recruit Mike Gesell is the latest "one who got away."

* The gametimes and networks for the 2011 Big Ten-ACC Challenge are set; Iowa draws Clemson at 8:15pm CST on ESPNU on November 29th.  Fuck Clemson.

* The footballers, wrestlers, and men's hoopyballers weren't the only Iowa teams to get their creep on last week: the lady cagers added a recruit as well, Claire Till, a 6' small forward from Dubuque Wahlert and the daughter of Iowa women's basketball's regular radio color analyst, Shelley Till.