Good day, I'm Luke Fickell, head coach of The Ohio State Buckeyes, and since this is my first time at The Big Ten Media Days, I thought I'd break The ice by opening with a joke: I just saw this is in The news. Did you see this? Did you see this? The NCAA has decided not to slap The dreaded "Failure to Monitor" label on The Ohio State athletic department. But what The NCAA doesn't know -- and here's The joke -- is that The athletic department knew everything from The very beginning. Furthermore, I have tapes, transcripts, photos, videos, receipts, DNA samples, used tattoo needles, and a suitcase full of gold pants to prove it, all hidden in an undisclosed location.

That's not really a joke, but, okay, welcome to the Big 10. What's with the sweatervest?  Isn't that the old guy's thing?

Well, The Ohio State University athletic department gave me this sweatervest on my first day. Funny story. I went to The old coach's office -- you know, The big one, with The mahogany desk and The cognac and The signed photos of Woody Hayes and Archie Griffin -- and they told me that office was under construction and redirected me to my new office, which was actually my old office, which is actually a cubicle. But I didn't hear any sawing or hammering.

But what about the sweatervest?

Oh, well when I got to my new-old office, they had this waiting for me.  It's stenciled all nice-like, and they say it's a game-worn original with "authentic smell and staining".  Those guys really go The extra mile.

Wait a minute -- are you capitalizing all of your "the's"?

No, don't be ridiculous.

Of course, that is Th -- I mean, that is La cosa mas ridiculosa in El mundo.

That's just Spanish, and you're still doing it.

Anyway ... so they gave you that sweater-vest...

"An Dickens"? Fine, whatever, but did they make you wear that sticker, too? 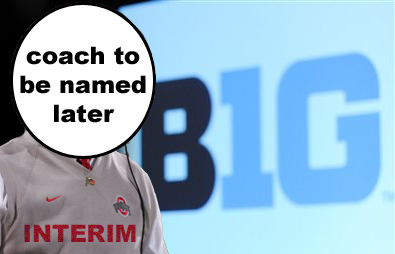 Yeah, that was a good joke. I poked my head into the AD's office, just to, you know, introduce myself, and they slapped this on my face.

Can you breathe through that thing?

It's this new breathable, stretch fabric from Nike, so, yeah, sort of.

Don't you find this treatment kind of offensive?  I mean, you were named the head coach -- you're not just an interim coach anymore.

You would think so, but I've been keeping my spirits up.

Humor. Like that joke I told you earlier. It's a good joke, huh? Well, I have more jokes just like it. Whole books of them. Massive binders of jokes. All in undisclosed locations. And I'm, hey, I'm a funny guy, you know. I like to talk. I'm thinking of going to some open mics, bringing my props .... [ominously] ALL MY PROPS ... and telling my jokes.

That's great. It's good to have a hobby. Who are your comedic influences?

Those are ... interesting choices.

Well I like prop stuff. And suspenders. Anything that brings about suspension. [ominously] SUSPENSION.

Can you share some of your act with us?

Sure. (rummages under table) What's this?

It looks like a big salad bowl filled with little toy musical instruments.

How ‘bout this. (rummages some more) What's this?

It's just a piece of paper with "probation" written on it.

This is getting a little weird. Can we get back to football?  How do you see the year going Ohio State?

I think this year can be characterized by one word: stability.  I see continued success, and I see it ending with me still having my job as head coach.

But, come on, you've never been a head coach before, you're very young, what qualifies you to take over one of the premier college football programs in the country?

My name ends in an "ell" sound, this program practically runs itself, and I know things.

Fair enough. Watch your back, Luke.