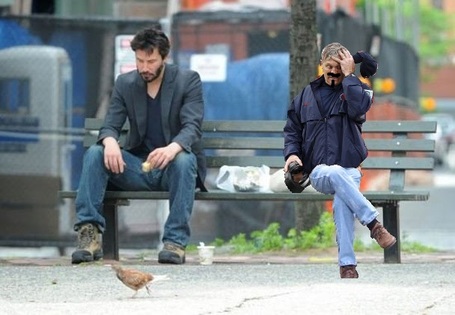 I almost had him.

I chased him for three years.

I did the same.

I went from California to Australia.

It transcended my job.

It transcended my life.

What's your story, Bobert?  What did you do for a living?

Dog racing, actually.  And I've been trying to track down my brother Ron for years.  Dude was my nose.

Yeah, I can't smell. so he used to smell for me.  I need my nose back.

What about you, Utah?  What do you do?

I was chasing this surfing band of bank robbers.

They killed my partner.  They kidnapped my girlfriend.  They forced me to let them go.

And I chased their leader, this guy named Bodie, to the end of the earth, and I had him, and I let him go again, and he got away or died or something.

I got in with the LAPD, ended up in this situation where a crazy guy put a bomb on a bus.  After that, I just kinda figured I'm bad luck in law enforcement, so I moved home and started a rock band.

Anything I would have heard?

You know, you look familiar.

Not as familiar as you.  I loved that movie where you bend spoons.

No, I mean I've seen you before.

Recently, too, like...wait, over there!

/points at nearby park bench 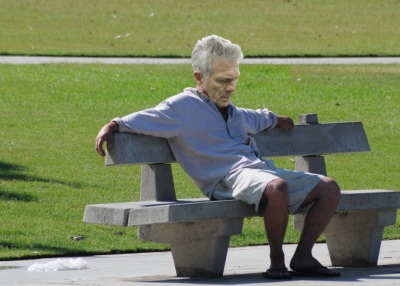 That's him!  That's my brother!

RON!  DON'T RUN AWAY FROM YOUR FEELINGS!  RON!

/chases Ron Zook through the park

/destroys kid playing red rover who gets in the way

/gets trapped behind crowd

/runs into a guy

Ouch!  What the hey is goins on?

Sorry, Coach Pelini.  Sorry about that.  I'm chasing my...

Chasing Ron? Whys would yous do somethin like that?

Here, lets me help yous up.

How did you know it was lavender shampoo?

I has mees a pretty darned good sniffer.

Yessir, funny looking Ron Zooks.  I can smells mees some potpourris from a mile aways.

Smell me, and tell me what I had for lunch.

Aw, yous hads some Arbys beefs and cheddar and the seasoned curlys fries.

Tell me, Bo, what do you like to do during the offseason.

Aw, mostly I drive mines Camaro round Lincolns and hangs out at the dogs track.

Well, I like Camaros and dog tracks too.  Do you want a new friend, Bo?

I needs me a new defenses coordinator.  My bros pretty stupid and he's gots the angries all the time.

You wanna be mees defenses coordinator?

That depends: You wanna be my nose?

Hecks, I can be yours nose.  I'ms like a hound dog r somethin.  I needs a defenses coordinator though

Well then Bo, I think we've got a deal.

From now on, you're my nose.

An yer mees black sheep brother from a 'nother mother

This is going to be awesome.