Big Ten Media Days: I Can Call You Bobert, and Bobert, When You Call Me, You Can Call Me Al

Share All sharing options for: Big Ten Media Days: I Can Call You Bobert, and Bobert, When You Call Me, You Can Call Me Al 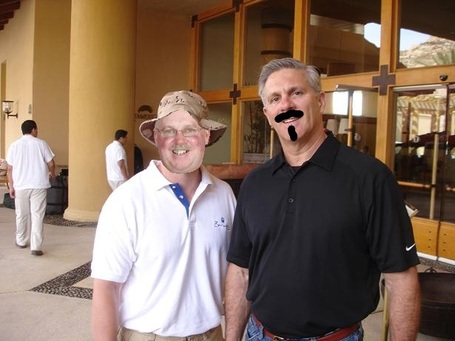 Three years ago, in anticipation of Big Ten Media Days, we went in search of Bobert Garthe "Bob" Zook, the older brother of Illinois coach Ron Zook.  Bob was living in a storage shed in Pensacola, Florida, bowling in a Tuesday night league at a nearby alley (not a bowling alley, an actual alley), and searching far and wide for his long-lost younger brother.  You see, Bob Zook was born with Russian Reversal Syndrome, a disease that rendered him smell-impaired.  Ron had spent his childhood studying the disease and refining his own sense of smell so that he could smell for both himself and his older brother.

Then he became a shampoo aficionado, and just like that, Ron was gone, lost to a seedy underworld of shampoos, oils, and linaments.  Bob hasn't seen his brother in years, despite a single-minded effort to find Ron and reconcile.  This isn't just a brother, mind you.  This is the man's sense of smell we're talking about.

We're here to help, of course, and so while we weren't able to procure media passes for ourselves, we pulled some strings and got Bobert yet another press pass for media days.  Bob acts as our correspondent, tweeting updates (@BobZookROLLIN) and interviewing the coaches in attendance over the next two days.  He might one day ask you to be his nose.  For the next two days, let him be your eyes and ears.

(Should actual news break, we'll be here with it, but let's face it: That's never going to happen.)