Share All sharing options for: It's Not Plagiarism If You Link To It Would Prefer If You Leave My Father Out Of It

It's Not Plagiarism If You Link To It is BHGP's regular news roundup. Send all tips to any of the email addresses at the bottom of the page. Seriously: any and all tips are appreciated, although not all tips will necessarily get used in INP.

* Dysfunction junction.  The Big 12 had their three-ring circus Media Days earlier this week, and -- surprise! -- the league is still dysfunctional and Texas is still kinda jerky and, wait, none of this is surprising at all.

"If we want to get into this and have everybody draw their swords, nobody’s going to be left standing," Commissioner Dan Beebe said Tuesday. 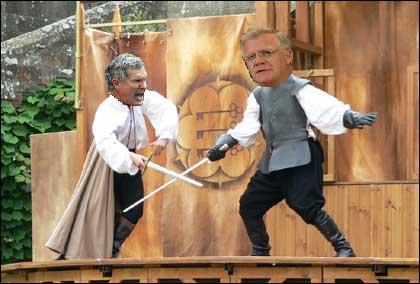 Of course Big 12 Media Days look like a Renaissance Fair.  What did you think they looked like?

* Fight for your right... TO POOOOLLLLLL.  The Big Ten can put the kibosh on the official Big Ten preseason predictions and whatnot, but you can't stop those kooky contrarian writers from doing what they want anyway.  So Doug Lesmerises of The Cleveland Plain-Dealer got a host of Big Ten beat writers together and picked their brains about the Big Ten in 2011.  Survey says?  They really like Wisconsin and Nebraska.  Oh, and Mas Casa is ready for HOKEAMANIA TO RUN ALL OVER YOU, BROTHER.

* Death to TV gridlock.  Adding Nebraska hasn't (yet) added to the Big Ten's bottom line in terms of higher media rights (although that's surely coming at the next rights negotiation), but it has allowed the Big Ten to make some welcome scheduling changes for television:

"The windows are no longer exclusive," said Mark Rudner, the Big Ten’s senior associate commissioner for television administration. "The network will have 3:30 Eastern games in the same window as ABC’s 3:30 Eastern games, which heretofore they couldn’t do. The same in basketball.

"Last year, since the beginning, if ESPN had a 7 p.m. Eastern game, that meant that the Big Ten Network had to wait until 9 p.m. Eastern, until the window was down. Now they’ll get some measure of relief."

Those days of 4-6 Big Ten games with 11am start times?  Dunzo.  And those late start time for Iowa hoopyball games?  (hopefully) Finito.  These are both very welcome changes.

* European Adventurez.  The Prime Time League has wrapped up another season, but there's more basketball to be played for Matt Gatens and Bryce Cartwright -- they're heading to Europe:

Cartwright and Gatens will play three exhibitions with the East Coast All-Stars as part of the 4-Nations Cup in Tallinn, Estonia next month. Their team will play select teams from Estonia, Sweden and the Republic of Georgia.

The Americans are also bringing a secret weapon in their quest to win the 4-Nations Cup: Wisconsin's Mike Bruesewitz, he of the most splendiferous jewfro in college hoops.  (Although he might have cornrows now.)  As far as Gatens and Cartwright go, here's hoping their European adventure is more Eurotrip and less National Lampoon's European Vacation.

BLOWN PLAYZ AT THE PLATE

* Maize 'n' Brew Dave is having breakfast with Bloodpunch.  #PRAY4MNBDAVE

* Do you need a wonderfully detailed breakdown of Iowa's zone blocking schemes?  Of course you do.

* The nine-game conference schedule for Big Ten football?  It's coming.

* Mel-sizzle cracks Basketball Prospectus' Top 100, which is probably the first time an Iowa player has done that since Greg Brunner's hairline was receding into the top row at CHA.

* You can take the coaches out of Iowa and Iowa State, but you can't take out THE SEETHING HATRED.