Anthony Hubbard, Fran McCaffery, and The Lessons of Rhabdogate

Share All sharing options for: Anthony Hubbard, Fran McCaffery, and The Lessons of Rhabdogate

On Thursday, we were told that incoming recruit Anthony Hubbard was abruptly leaving Iowa City and the UI basketball program, allegedly for homesickness.  You see, we were told, Hubbard came to Iowa from the east coast, and like so many kids from out east, two weeks in Iowa had convinced him that the grass was greener in the mid-Atlantic.  It was odd, given that there had been no rumors of Hubbard's pending departure and McCaffery was out recruiting all week, to say nothing of the fact that Hubbard is a whopping 26 years old and spent some time in prison.  There was no news conference.  Cursory statements were issued.  Phil Haddy was pleased.

Plausible, that is, until we were told Hubbard had been in contact with Nebraska over the weekend.  Nebraska, which is about 300 miles further from Virginia than Iowa City and completely devoid of live theater and crab cakes.  Our response: 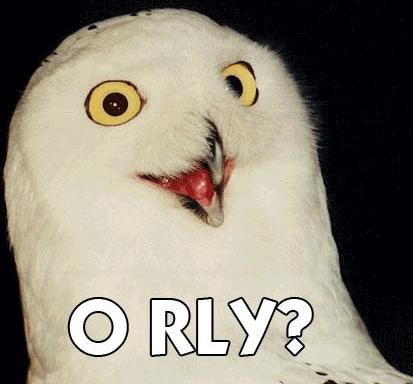 This did not fit the narrative of the homesick kid, a narrative that was implausible to begin with.  We were then told that it wasn't homesickness so much as the fact that Hubbard didn't get along with his teammates, with whom he was playing summer ball in the Prime Time League.  After all, Hubbard is an older player stepping into a team where a couple of players, rightfully or wrongfully, see themselves as top bananas.  There was even a rumored altercation between Hubbard and Gatens during a game.  And then Dochterman blew up that theory.  People started believing the worst.  Phil Haddy contacted Biff Poggi.

Tonight, we get word that the Nebraska dalliance has come to an end, via Lincoln Journal-Star sportswriter Steven Sipple, courtesy of FOTP John Bohnenkamp's Twitter (with relevant snarky RT comment attached, of course): 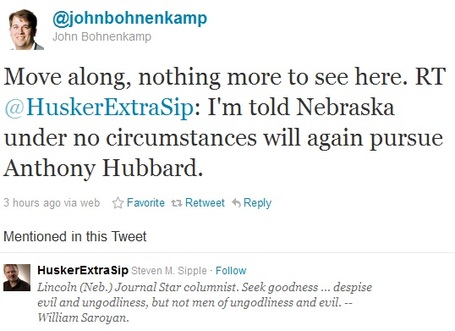 The language there is fascinating.  Nebraska recruited Hubbard before the A-Train chose to vacation in Iowa, so their decision to not "again" pursue Hubbard could reference their prior overtures. However, given that we know there was at least some kind of contact, it's seemingly more plausible that there was some sort of contact over the weekend, after which Nebraska -- for whatever reason -- decided that a player they coveted one month ago was no longer worth their time.

There is now so much smoke in the room that we're all laying on our bellies on the floor, and it's all due to the combination of circumstances.  If this were your typical freshman, the confusion could be chalked up to the convoluted thought process of a teenager.  If this were your typical uncontroversial recruit, the swift exit could go unnoticed.  This was a peculiar recruit, quite possibly the most peculiar recruit in the history of the program, a player in his mid-20s and with a past.  This is a player who could lose his scholarship and cost his coach a job just by looking cross-eyed at a public safety officer.  If there was a reason he left that wasn't so simple and innocent, there's no denying it would be in the best interest of everyone involved to say otherwise.

Say what you will about Fran McCaffery, but he's been brutally honest and forthright with the press in his first 15 months at Iowa.  It is that track record, and that track record alone, that makes me think this is still something innocuous.  It's time, though, to face the press and clear the air.  Take every question, not just softballs from Jon Miller and Pat Harty but from every reporter who wants a credential (we promise, Coach, we won't be there).  Answer every inquiry until the assembled media is more interested in the sandwich spread than it is in pursuing the story.  Sit there all day if you have to.  As Ferentz can tell you after his own moment of truth this February, the story won't die until you kill it by strangulation.  So far, we've gotten our rushed (and probably ill-advised) press statements that raised every question and provided few answers.  If this isn't going to consume the next six months, the answers need to come, and they need to come now.