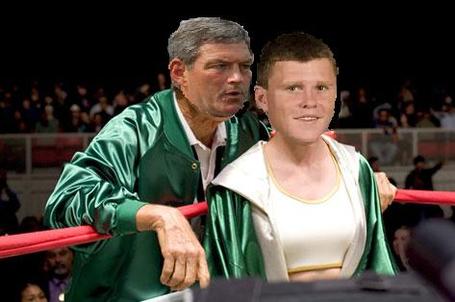 "No, see, ya gotta keep it close 'til the end, then hope ya got more than the other guy..."

The Des Moines Register took off its "firing people" hat, put on its reporter hat, and invoked the good ol' Open Records Act to obtain a copy of the contract for Iowa's game with Louisiana-Monroe this fall.  Lo and behold, Iowa's paying out a cool one million dollars to the Team Formerly Known As The Indians.  Well, $1.05 million, technically:

The Hawkeyes paid nonconference opponent Louisiana-Monroe a school-record $1.05 million guarantee for the Sept. 24 game at Kinnick Stadium, according to contracts obtained by The Des Moines Register through the Open Records Act.

That $1.05M price tag is a record now, but it almost certainly won't stay that way for long -- prices for these "guarantee" games keep going up, up, up.  Iowa (and schools like them) are willing to pay these outrageous prices because they're still turning a profit: as the article notes, Iowa generates $2M per home game via ticket sales alone, which (obviously) doesn't factor in revenue generated through concessions, parking, or merchandise.  (And now you see why schools like Iowa are adamant about playing seven home games every year.)

I couldn't find information on the guarantee being paid to Tennessee Tech this fall, but Iowa paid Eastern Illinois $400,000 last year.  Considering that Tennessee Tech has over twice as far to travel (660 miles versus 300 miles, according to my friends at Google Maps) to get to Iowa City (read: higher travel costs) and that these guaranteed fees tend to go in one direction over time (read: up, up, up), it's probably safe to assume that Iowa's paying at least $500,000 to Tennessee Tech.  So for the low, low cost of just $1.5M dollars (Less than half of Kirk Ferentz's annual salary!  Just three-fourths of the value of ticket sales for one home game!), Iowa gets to bring in two teams no one wants to see (if I told you the quarterback of UL-Monroe was a former male stripper-and-cable repairman named Carl Hungus, you would probably believe me -- because no one gives two shits about the accuracy of reporting w/r/t Louisiana-Monroe), in games Iowa has very little chance of losing (you say "2009 UNI," I say "statistical aberration"), and that Iowa fans will watch only because they're desperate addicts in need of a fix (and if a home game with Michigan is the equivalent of the purest ye-yo, shipped directly from Columbia, then a home game with Louisiana-Monroe is the equivalent of buying a bag of nose candy that's half baking soda, mixed in some dude's basement in North Liberty).  What a bargain!  What a sport!