Share All sharing options for: The PTL Lifestyle, Game 6

I couldn't make it to the PTL this Sunday, so instead of a detailed rundown, here are links to some more industrious folks who did.  Apparently it was quite crowded out in North Liberty yesterday, due to the presence of the most incandescent star in the ex-Hawkeye basketball galaxy -- this guy: 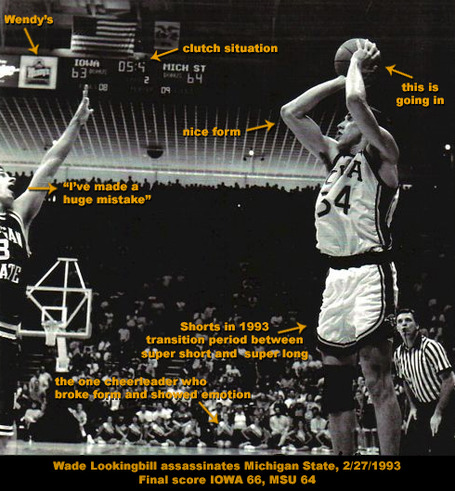 Also, Roy Marble, Adam Haluska, Bobby Hansen, Greg Brunner, Jeff Horner, J.R. Angle, Cyrus Tate, Luke Recker, Steve Krafcisin and Greg Stokes were on hand, but we all know who the real draw was here: The 'Bill.  I wanted to do a little retrospective here on Wade Lookingbill's career and check my recollection that he was actually a pretty valuable player (he was also a Mr. Iowa in basketball, which I didn't know), but Iowa basketball statistics from 1991-93 are surprisingly hard to come by on the internet.  Some information age we live in.  Anyway, here are the links: