Show Me The Dolla Dolla Bills: The Big Ten And Media Rights

Share All sharing options for: Show Me The Dolla Dolla Bills: The Big Ten And Media Rights

If the theme of this off-season has been scandal (and, oh, it has, with "NCAA sanctions" replacing last year's "conference realignment" as the buzzwords of choice), the secondary theme has been media rights, which have been exploding in geysers of cash for the Pac-10 12 and Big 12.  The Pac-12 got a deal worth $250 million annually from ESPN/ABC and FOX, quadrupling their previous deal, despite airing their most valuable programming (live football) at a time when two-thirds of the country is asleep, passed out, or trying to convince the drunk girl at the bar that, no, it really would be a good idea to go home with them tonight.  The Big 12 got a deal for their secondary media rights (i.e., the second- and third-choice games each week) that's worth $90M annually from FOX, quadrupling the previous value for that deal and actually making it more valuable than their primary media rights deal (worth $60M annually from ESPN/ABC).  The Big East turned down an offer from ESPN to re-up their media rights deal to $110-130M annually -- a figure that would have more than tripled the current value of their deal -- because they think there might be even more filthy lucre available when their current deal actually expires in 2013.

So what does all this mean for the Big Ten?  A few things.  First, the Big Ten (and the SEC) are no longer the undisputed kings of cash in the college sports world... but they're still doing just fine.  In fact, even after the gargantuan increases made by both leagues (but especially the Pac-12), the Big Ten still sits atop the media rights heap, collecting a reported $252 million annually from ESPN/ABC, CBS, and their own BTN*.  Could the future hold even greater riches?  The league re-upped with ESPN/ABC in 2006 for ten years, so they'll have to wait another five years before they can try to cash in on the current media rights frenzy.  But will there still be insane amounts of media rights moolah to be had at that time? 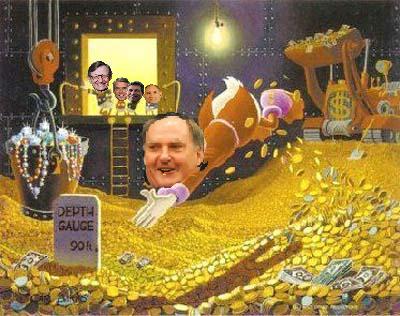 Jim Delany, in his private office at Big Ten headquarters.

The question depends in part on whether the current frenzy is a temporary bubble or an ongoing market correction.  Based on the main factors driving the frenzy -- intense competition (as well as unexpected cooperation, in some cases) between media companies and the nature of the programming itself -- it seems a bit more like the latter.  Sports Business Journal reported that one of the key factors in the Pac-12's incredible media rights windfall was the unexpectered partnership that emerged between ESPN/ABC and FOX.  The two media titans decided that both their short- term goals (acquiring highly desirable programming) and long-term goals (keeping Comcast out of the marketplace) would be better served by pooling their resources to make the Pac-12 an offer that no solo media company (in this case, their principal competitor in the race for the Pac 12's signature, Comcast/NBC/Versus) could top.  Individually, neither company could match (or improve upon) the Comcast bid, but collectively they could trump it.

Why does this matter?  Because the best way for the Big Ten to reap another windfall when they're renegotiating their media rights deals in 2016 is to have as many options in play as possible.  Creating a bidding war worked out marvelously well for the Pac-12 this year; there's little reason to think the same thing wouldn't occur in 2016 with the Big Ten rights in play.  So whether or not you really want to see Big Ten games on Versus (or whatever new name their Comcast overlords devise for the network), root for them to still be trying to turn themselves into a major player in the televised sports business in 2016.  If ESPN/ABC has no real competition for the rights, there's far less incentive for them to increase their offer.

The second factor in the escalating media rights fees being handed out like acid at Bonnaroo is the nature of the programming itself.  In an age of DVRs, Hulu, YouTube, On Demand, and various other platforms for watching programming -- and, crucially, watching programming without also watching the advertising that ultimately funds its creation -- networks (and the advertisers that underwrite them) are desperate for programming that viewers will actually watch live.  Enter: sports, one of the last remaining examples of programming that people tend to universally feel the need to watch live rather than tape-delayed, which has the effect of making it programming that's increasingly worth staggering sums of money.  This factor is even better news for the Big Ten when it goes to renegotiate its media deals in 2016 because there's no virtually no indication that things are going to be changing.  People are still going to want to watch sports live and networks are still going to be eager -- desperate, even -- for programming that viewers actually watch in real time.  If anything, the trend should only exacerbate as improved televisions and home theater systems continue to win out for Joe Fan over the ever-escalating cost of attending games in person.

The other good news for the Big Ten is that the quality of the teams (and the conference itself) don't necessarily seem to matter all that much in these media rights negotiations.  The Pac-12 hit the jackpot despite their two signature programs (USC and UCLA) either entering NCAA sanctions-induced purgatory or yet another decade of mediocre results.  The Big 12 struck it rich despite losing one of their biggest television draws and most storied programs (Nebraska).  So even if Ohio State follows the USC path to NCAA sanctions hell, Penn State enters a wilderness of their own when JoePa finally, inevitably leaves the program, and Michigan continues to struggle to regain their former glory, don't fret too much.  The same things that have drawn media companies to the Big Ten for decades -- their large, rabid fanbases and strong presence in powerful media markets -- are likely to still keep them looking quite fetching in the next media rights shakedown.  We'll have to wait and see just what kind of deals are out there for the Big Ten in five years, but chances are good the offers will be very rich indeed.

* All figures from Sports Business Journal; in particular the table referenced here and here.  The tables aren't perfect -- they appear to lump the Big Ten's ESPN/ABC money under BTN, for instance -- but they're the cleanest, most accurate, and most current breakdown I could find.