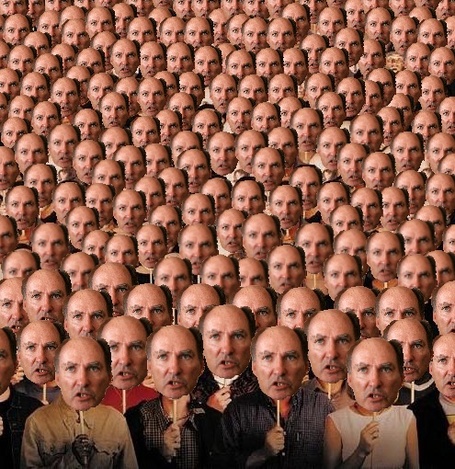 Last June, we were all waiting for the world to end.  The Big XII South was about to break off and fall into the ocean.  Texas A&M was seriously considering an offer from the SEC.  The Big East was about to spin apart, to be carved up by the bigger conferences around it.  Notre Dame was...well, still Notre Dame.  At the center was Big Ten commish Jim Delany, pulling the strings at the Big XII conference meetings.  Colorado jumped to the Pac-10 first, but when Nebraska voted to leave the Big XII, then brought Delany, grinning like Bobby Heenan, in from an anteroom, all bets were off.

And then it stopped.  Big XII commish Dan Beebe scrambled to save his conference by giving an even bigger slice of the pie to his meal ticket in Austin.  The Big East not only held together, but actually expanded.  The Mountain West and WAC, already the Kashmir of major college sports, once again raided each other, with both sustaining significant blows (the WAC's being quite likely fatal).  However, when compared to the proposed Pac-16, the latest reshuffling of the west was a blip.  One year later, it looks like realignment is over.  The world remained intact.

But what if it didn't?

What if, instead of backroom maneuvering and clandestine trips, we just opened it up and drafted conferences?  Which teams would go first?  Which teams wouldn't go at all?  How would the commissioners determine who they wanted?  We're about to find out.  Welcome to the SB Nation NCAA Conference Re-Draft.  Over the next few weeks, we'll be drafting six new conferences of at least twelve teams each.  And the best part of all is that your friendly overlords here at BHGP are commissioners of one conference (tentatively called "The Big HGP") and have drawn the second pick in the draft.  Should we chase dollar signs and draft Florida, even with an unproven head football coach?  Should we look for overall athletic success and go for Texas, despite the fact that the Texas legislature would force us to use our second round pick on Baylor?  Should we ignore concerns over intra-conference chemistry and take THE Ohio State University and their representatives from Along THE Olentangy?  Should we just aim for success in sports that involve chicks with sticks and take jNorthwestern?  The rules are after the jump.  The comment thread is open for suggestions.

Game Objectives. The purposes of the fantasy draft are: (1) to explore the values of individual schools by drafting them sequentially, and (2) to have fun strategically building a conference of schools.

There will be six conferences, and such conferences are NOT meant to be new versions of current conferences. That is, the objective of the game is not to create tweaked versions of what we already have. The goal is to draft schools based on their overall value, and to compile a conference of teams strategically and coherently.

What makes a school valuable? Well as one of the six conference commissioners, we leave that largely up to you, with a few important guidelines. First, bearing in mind that we are drafting athletics conferences, athletics should be weighted heaviest, if not exclusively.

While obviously we must consider athletics, the following are factors you may, but are not required to consider:

On the flipside, for purposes of this game there are two factors that are NOT to be considered. First, do not take travel/geographic concerns into consideration. In real life, Washington and Florida are unrealistic conference partners; in our world, that doesn't matter -- neither from a travel or time zone standpoint. Second, and related, while we may take individual rivalries into consideration (e.g. pairing Michigan and Ohio State), preservation of current conference history/rivalry/alliance is not to be considered.

In sum, there is no single way that schools must be valued and/or grouped together. Some may wish to create the best conference of all-around athletics-academics combination. Others may want to create a revenue superpower. There are any number of valid ways to do this. The only limitation is not creating a group that is based on regional and historical ties. Time to wipe the slate clean and start over.

The draft order is as follows:

The draft will be a snake draft, with Red Cup Rebellion receiving the 6th and 7th picks. So while BC Interruption receives the first overall pick, we won't pick again until picks 12 and 13, and so on.

The draft is officially being run by the Oklahoma State Cowboys blog Cowboys Ride For Free. Cowboys RFF has the final say in the matter in any and all disputes.

Schedule. This week, we are introducing the Re-Draft project and want to get the conversation going. We need to start thinking about the following questions:

Who would you, our dear readers, want to draft? What kind of alliances do we seek? What sort of values are we looking for in a particular program? Most importantly, since we have the first pick, is who do we start with? Which college football program should we start building a conference around?

On Monday, June 13, BC Interruption is on the clock. They'll need to submit their first overall pick of the draft next Monday. Upon making the first round selection, the conference commissioner will then consult with their draft choice (if SBN has a blogger for that school) and the two of us will collectively decide on our draft strategy and make our second round choice.

If in any subsequent round only one conference remains, it may select the remaining members of its conference up to a maximum of 16 schools.

Finally, on Monday July 25, the full and complete conference rosters will be announced and discussed across the SB Nation community of NCAA site. Hooray.

Other points of note: When selecting a school, you are bringing on all of its NCAA-sanctioned varsity programs. So if you select Notre Dame for its football program all of the Irish's other sports come along with it..

So if you've gotten this far, cool. We want to make sure that everyone clearly understands the objectives and rules as this sort of thing only works if we're all operating in the same universe. Basically, understand that the goal here is not to re-draft the Big 12 without Baylor or Iowa State or the Big Ten without..... well, I was going to say Indiana, but funny how things work out, you might not want to include Ohio State at this time.