Share All sharing options for: Merry Steelemas: Phil Steele's Predictions For Iowa In 2011 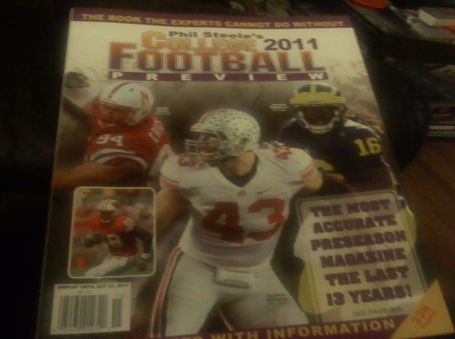 But if you're looking for reasons why Iowa might struggle in 2011, Steele has a few of those, too.  Iowa had a defensive YPP (yards allowed per point) total of 19.53 in 2010; almost three-quarters of teams who had a defensive YPP total like that had a record the next year that was the same or weaker.  Iowa also had a very positive turnover margin (+13), which often means some backsliding the next season (three-fourths of teams with with turnover margins greater than +10 had a record that was the same or weaker the next season).  A more concerning stat might be Iowa's poor placement on Phil's experience chart.  They rate 118th in the NCAA, sit at the bottom of the Big Ten in total experience points (40.8; next lowest is Indiana at 51.1), percentage of lettermen returning (57.6%), percentage of 2010 yards returning (25%), have the second lowest percentage of 2010 tackles returning (47%), and have the third-lowest total of returning offensive line starts (59).

Still, Steele thinks they can match last year's 8-win total, assuming that they'll have better luck in close games this year and because it's a program that "consistently overachieves when expectations are low."