Dan Gable Statue to be Erected at Carver Hawkeye Arena

Share All sharing options for: Dan Gable Statue to be Erected at Carver Hawkeye Arena

In a long-overdue move, the University of Iowa has announced plans to erect a seven-foot statue of Dan Gable outside the main entrance of Carver Hawkeye Arena.  The University has commissioned Larry Nowlan, who sculpted the Nile Kinnick statue now located outside the football stadium, to create the Gable statue.  Nowlan has been told to commemorate one of Gable's finest moments at Iowa, and we think he's delivered. 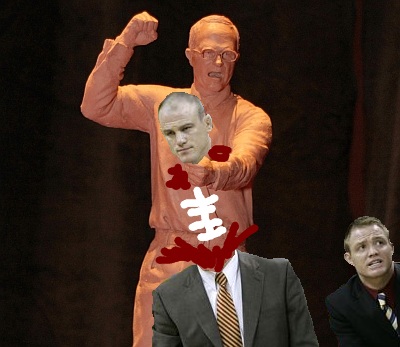 For those who have forgotten, that is a shot of Dan Gable administering the Sub Zero MK1 fatality on then-Iowa State head coach Cael Sanderson during the Hawkeyes' 2007 dual meet victory.  Sanderson was so traumatized by the experience that he had to leave the state, head quite literally in hand.  BHGP contacted Gable by telephone for reaction; there was an answer, but the only audible noise on the end of the line was a dying grizzly bear.

(Original photo here; photoshoppers can get to work)