It's Not Plagiarism If You Link To It Doesn't Know Where Those Illegal Fireworks Came From, Officer

Share All sharing options for: It's Not Plagiarism If You Link To It Doesn't Know Where Those Illegal Fireworks Came From, Officer

It's Not Plagiarism If You Link To It is BHGP's regular news roundup. Send all tips to any of the email addresses at the bottom of the page. Seriously: any and all tips are appreciated, although not all tips will necessarily get used in INP.

Would you like a side of #TCAP with your peanut butter sandwich?  Chris Hansen was unavailable to comment, mainly because he's too busy being crushed by the universe's wicked sense of irony.

* Geography makes for strange bedfellows.  This wacky endeavor isn't the only conference realignment project going on at SBN this summer; our blog comrades at Cowboy Altitude have been working on an extensive project realigning conferences to better reflect geography.  They got to Iowa's new league (the Big 11) recently, with decidedly mixed results.  The good news is that this new conference incorporates most of Iowa's border rivals (aside from the Illinois schools and Wisconsin), as well as their intra-state arch-rival, and includes some intriguing new foes from farther south: Oklahoma, Oklahoma State, and Arkansas.  The bad news is that it also incorporates Kansas, Kansas State, and... Tulsa.  Yes, Tulsa.  Clearly, Dan Beebe is the commissioner here.

Initially, this conference line-up just feels wrong; Iowa certainly feels like it has more in common with Illinois, Wisconsin, and Michigan than it does Oklahoma, Arkansas, and Tulsa.  Then again, Iowa fans haven't known anything but the Big Ten and its accompanying teams for over a century; that certainly makes it harder to see the similarities between Iowa and other options.  But from a "fit" standpoint, Nebraska and Missouri both seemed to grade out pretty highly for the Big Ten during last summer's EXPANSIONPALOOZA, and Kansas and Oklahoma would certainly bring a fair amount to the table... sorry, no, it's just too weird.  It would be one kick-ass wrestling conference, though.

* Going, going... gone.  Remember those rumors about former Missouri QB Tyler Gabbert and former Iowa (and former Arkansas) PG Jeff Peterson pondering possible transfers to the Hawkeyes in their respective sports? I hope you weren't counting on them suiting up in black and gold in the near future... because it ain't happening.  Gabbert is heading to Louisville to continue his career, while Jeff Peterson is making one last hurrah at Florida State.  These moves aren't unexpected -- Louisville was the early favorite to land Gabbert (they're the current employer of former Nebraska OC Shawn Watson, who recruited Gabbert) and given Peterson's stated desire of playing in the NCAA Tournament before his eligibility expired, heading to a team that's made three straight tourneys (and has an opening at the starting PG spot) makes more sense than heading to a team that's had three straight losing seasons (and doesn't have an opening at the starting PG spot).

* Home is where the competitive advantage is.  Would you believe that college football teams really do play better and win more games at home?  Yeah, you probably would, but that post provides some nice statistical backing for that notion.  Although there is one Big Ten team that doesn't get much benefit from playing at home:

Wait, Ryan Field doesn't give just Northwestern an actual homefield advantage?  Hmm.  I can't quite put my finger on why... 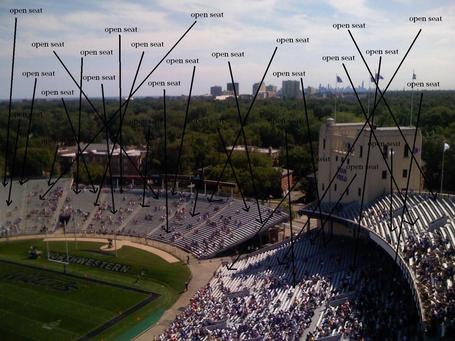 * When cupcakes go bad.  ESPN singled out the worst offenders in college basketball in loading non-conference schedules with cupcakes ($)... and there were some familiar faces in the mix.  Despite the cotton candy-soft slate on tap this fall, Iowa wasn't one of the teams on the list.  The list averages the non-conference strength of schedule rankings over the last four seasons; presumably all those early-season tournaments Iowa participated in more than off-set the inclusion of several other unimpressive non-conference foes.  Several of Iowa's rivals didn't fare so well, as Iowa State, Nebraska, and just Northwestern all made the list, with ISU earning top dishonors among that lot with a second place finish.  On the surface, it seems strange that so many of the teams on this list have struggled to make the NCAA Tournament, since the main eason they scheduled so many patsies was to rack up enough wins to give them a shot at tasting March Madness.  But that's a flawed strategy: a diet full of cupcakes rarely provides a team with adequate preparation for the rigors of conference play (especially in the Big 12 or Big Ten) and a team that finishes with 19-22 wins and finds themselves in bubble limbo is virtually always going to find themselves on the outside looking in with that putrid non-conference strength of schedule ranking.

* If you're feeling withdrawal from the absence of Horace's excellent PTL recaps, fret not: Hawkeye Drive has a comprehensive recap of Tuesday's action.  And if you're still craving more basketball info, dive into Doc's breakdowns of Iowa's 2011-2012 opponents.

* POP QUIZ: Do you know who was the last Iowa native to begin the season as Iowa's starting quarterback?

* Any list where Nile Kinnick ranks behind Troy Edwards and Andy Katzenmoyer (among others) is indefensibly stupid, but ESPN's Simply Saturday feature did lead to a nice interview with Chuck Long.

* The Urb is coming to ESPN broadcasts next fall and with his assignment to the 12pm EST crew (with Dave Pash and Chris Spielman), there's a good chance Meyer will wind up calling an Iowa game or two.

* Charlie Sheen did steroids on the set of "Major League"?  ARE NO BASEBALL-RELATED MEMORIES SACRED?

* Carles from Hipster Runoff writing about sports for Grantland is the best collision of two great flavors since some genius had the bright idea to pair up chocolate and peanut butter.

* This is not the greatest video on the interwebs... this is just el homenaje.